This past weekend was the fifth annual Holmes, Doyle and Friends conference in Dayton, Ohio put on by The Agra Treasurers.  Although I attended Nerve and Knowledge over the summer, this was my first full conference.  And what a conference it was! 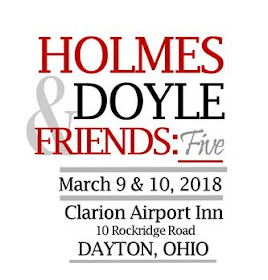 My wife and daughter were quick to capitalize on the weekend as well, taking advantage of the hotel pool and the Boonshoft Museum.  And Friday was all about the American Girl store in Columbus, so I missed out on most of the welcome reception that evening.  I got to the reception just as it was wrapping up and after saying hello to some folks I knew, I had the singular pleasure of finally meeting Fran Martin in real life.  Fran is, hands down, one of the nicest Sherlockians I've ever met!  (It didn't hurt that she gave my daughter and me each a chocolate magnifying glass)  She is quiet and reserved, but a true delight to be around.  Meeting Fran should be on everyone's Sherlockian bucket list.

Although I missed out on most of the reception, luckily Sherlockians are a social group, so there were quite a few people ready to sit around a table at the hotel bar.  Until karaoke started.  Then it was coincidental how quickly we all felt tired and called it a night. 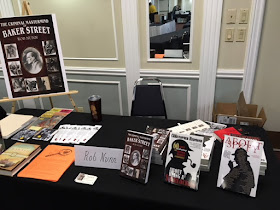 I had a vendor's table at the convention to sell copies of The Criminal Mastermind of Baker Street, About Sixty and About Being a Sherlockian, so my morning started pretty early.  Before setting up the table, I headed down for breakfast, and although I sat down at a table by myself, I was soon joined by Joe and Peter Eckrich, Fran Martin, Ray Betzner and Monica Schmidt.  I was quickly learning that there aren't strangers when you're at a Sherlockian event.

I'm not a morning person, but Saturday morning was one of the real highlights of the weekend for me.  The program officially started at 10, but people started milling through the conference room checking out vendor tables and chatting up other Sherlockians starting as early at 8:00.  These two hours had over fifty Sherlockians socializing and shopping.  I was lucky enough to catch up with other Sherlockians, meet new ones, and even get talked into being part of a promo video for the Baker Street Journal.

A lot of my conversations with people Friday night and Saturday morning involved us introducing ourselves and immediately recognizing one another's names from the online world.  It was very nice to finally put a face to the Twitter accounts, Facebook comments, and blog posts.  And you know what?  They are even better in real life! 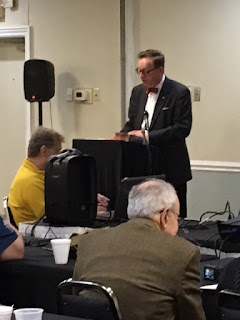 Another notable Sherlockian I met this week was Ray Betzner.  I have to say, I was familiar with Ray's name and his work on Studies in Starrett, so I was a little nervous meeting him.  Plus, the man can really rock a bow tie, a skill I am very envious of (When I try a bow tie, I look like someone tied a knot on a giraffe).  Ray is now one of my favorite Sherlockians.  His dry wit and quiet knowledge made every conversation I had with him a pleasure and I was sorry when each one ended.  At one point, my daughter was sitting with me at the vendor's table and Ray had a great conversation with her, and continued it when he saw her eating breakfast later that morning.  My daughter now calls him "the bow tie guy."

Holmes, Doyle and Friends was officially called to order a few minutes early and the festivities began!  As I said earlier, this was my first conference, and there wasn't a theme, so it was nice to see the range of topics covered throughout the day.  Members of the Agra Treasures ran a great program.

Ray Betzner started the day off with an interesting look into the understudied role of Mary Watson and included one of the best lines as to why she deserves more attention: "Mary Watson wasn't Yoko Ono." 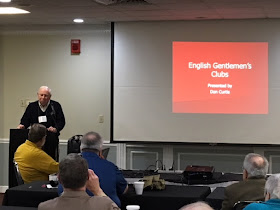 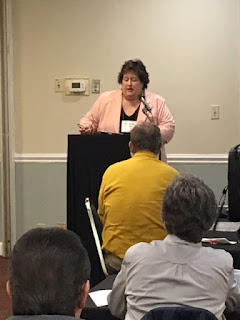 Jacquelyn Morris taught us all the difference between high tea and afternoon tea, something I was absolutely clueless about before her talk.  Plus, it made me think that my daughter and I should read Eloise at the Plaza together.

And what's the perfect thing to do right after hearing about teas, scones, and jam?  Eat lunch.  Brad Keefauver showed up Saturday morning, and I hadn't had much time to talk with him so far, so I made it a point to sit by him and Bill Mason at lunch.  Just like at breakfast, we were soon surrounded by a bunch of other folks, some I'd met before, and some new.  But all of them were a blast to hang out with. 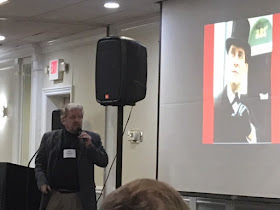 After lunch, Mark Friedman told us his play "Sherlock Holmes and the Mystery of the Crown Jewel," complete with musical tracks.  I've posted about Sherlockian plays before, but Mark's play was one that I will definitely be checking out if it's anywhere near the St. Louis area. 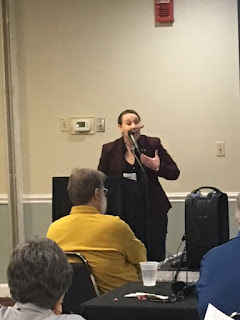 Then came Monica Schmidt, who started her talk with a humorous and cringe-worthy story of what happens when someone from the internet copies the original artwork on your tattoo.  Shen then made all of us just a little wary as she delved into what it takes to be qualified as a hoarder.  There are six specific criteria, and no matter what my wife says, I'm in the clear. 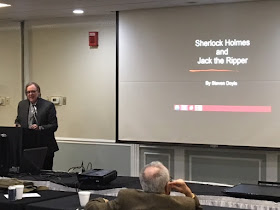 Steve Doyle was up next with a look at the connections between Sherlock Holmes and Jack the Ripper.  His talk made a strong argument not only for Holmes' involvement in the investigation, but also the real reason why Holmes was cranky the morning that The Valley of Fear started.  And going by Steve's logic, it's time to rethink trekking to New York in January to celebrate Holmes' birthday. 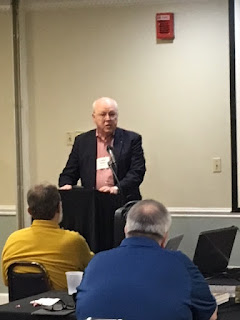 Following Steve was one of the most informative talks of the day.  Brent Morris took everyone through an NSA analysis of how Holmes broke the cipher in The Dancing Men.  My notes from this talk were pretty extensive, but a few highlights are that the letter E accounts for 1/8 of normal English, the letters E,T,N,O,R,I,A and S are the most common (not R,S,T,L,N and E as Wheel of Fortune would have you believe), and that the most common letters in the English language are an anagram of "senorita."  That's got to come up in trivia at some point in my life, right?  Brent also kept referring to Holmes' work in DANC as "crypt analysis," and I kept getting images of Holmes working a code while inside the crypt from Shoscombe Old Place. 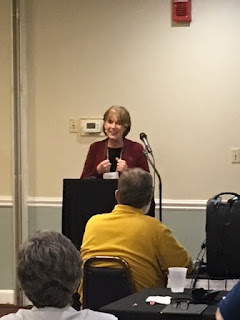 Liese Sherwood-Fabre rounded out the program with an insightful talk on the justice and penal system in Victorian England.  And making my teacher heart happy, she had handouts!

As the program wrapped up, I was happy to see that I'd sold a handful of books, and even happier to know that I was taking home more for myself to read.  That's what dealer's tables are for, right? 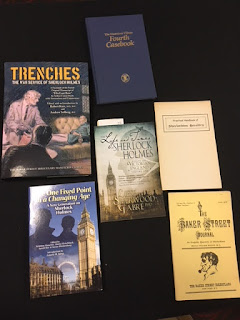 Dinner took us to a local BBQ spot and before we ate I was privy to my first ever speed word search.  It's stressful looking for all of those words while you're being timed!  Once everyone had their food, conversations started up all around the room.  Peter Eckrich and I spent quite a bit of time talking with Dan and Ann Andriacco, two wonderful folks.  Dan and Ann's son has recently been stationed close to St. Louis, so we were filling them in on all of the things to do with and without the grandkids every when they visit.  I was lucky enough to have Dan next to my table all day at the conference.  He's one of those folks I've emailed back and forth with and I always check his blog, but getting to spend time with him in person was so great. 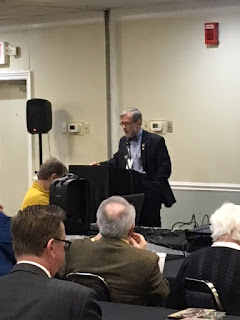 And that was my real take away from Holmes, Doyle and Friends.  If all of the day's talks were published somewhere they would be interesting reading.  But hearing them live as well as the questions and comments that came after were much better.  If all of the conversations I had had happened through email, I still would've been happy, but being part of a group over a meal or a beer is just so much better!  I started out my Sherlockian life as a guy who just interacted with people online, but the more and more I go to events, the more I know that Sherlockiana isn't just about the stories, it's about the people you engage with.

And these are some good people.
Rob Nunn at 7:14 PM
Share