This week's Interesting Interview is author extraordinaire Elizabeth Crowens!  Elizabeth recently won the Leo B. Burnstein Scholarship from the New York Chapter of Mystery Writers of America.  Her Time Travel Professor Series features Arthur Conan Doyle as a prominent character.  And let me tell you, these books are fast paced adventures!

Elizabeth has been a Sherlockian for years now and a writer even longer.  She's contributed to anthologies, magazines, websites, and a host of her own series which can all be found on her website.  I could go on and on about Elizabeth's writing career, but it's time to hear from the lady herself! 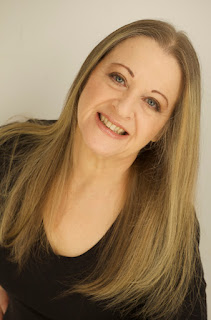 I like to take the broadminded approach and define it as anyone who is a fan of Sherlock Holmes in any medium--film, television, books, or theater, and is always hungry for more. They might not necessarily be scholars, but they are interested in scholarly accounts and references in regards to both Holmes and his creator, Arthur Conan Doyle. You can't leave out Doyle!

Although many are centralized on Holmes, to me, a Sherlockian also extends to an interest in the history of the time period when these stories were written. This also includes other Victorian crime stories, forensics, science and medicine, manners and customs.

By accident--LOL, or in Victorian terms-- I went in through the back door or the servant's entrance. I had already been writing the first novel in my alternate history series, Silent Meridian, involving my protagonist and Arthur Conan Doyle, with his interest in the Society of Psychical Research and Spiritualism. I needed to write a fight scene and wondered what kind of self-defense methods a Victorian person would use. Randomly, I Googled: Martial Arts and Sherlock Holmes, and I discovered a website for a local bartitsu dojo located where I live in New York City. (Doyle spelled it wrong as baritsu.) It happened that they had a class scheduled for the following day, and I showed up. That's where I met Rachel Klingberg who, in turn, introduced me to Susan Rice and Judith Freeman, who were former heads of ASH and the Priory Scholars, local scions in the New York City area. The New York dojo disbanded, but ASH and Priory Scholars have lived on.

"The Speckled Band," hands down. I thought the notion of the villain using a poisonous snake, slithering down a bell cord for a Victorian-era story, was wildly original.

Why are you asking me that question? Every Sherlockian is interesting-- from someone like Robert Katz who can explain Victorian autopsies and pathology to Jeffrey Hatcher who wrote the screenplay for Mr. Holmes. 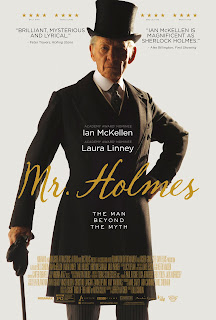 I'm a movie nut. I don't read many pastiches, but I love watching non-Canonical stuff on film. I regularly attend the Theater-goers group that Monica Schmidt started. A Saturday afternoon matinee is just what I need sometimes, especially since we've been socially isolated for the past year and a half. I also have a secret, Holmes-inspired project that I finished and am trying to find a new literary agent to represent, but it's very hush-hush for now.

The Victorian era was such an interesting time. Even more fun is making the excuse to travel across the pond to do my research in London, other areas of England, and Scotland, where Doyle was born and went to the university for medical school. I get a lot more out of traveling to a location, walking into buildings from that time period, and tasting the food than trying to look up stuff online. 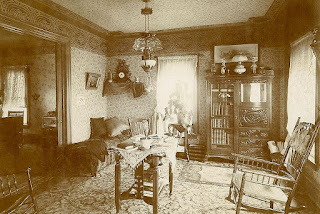 Arthur Conan Doyle, a historical figure that so many of us know so well, plays a big part in your Time Traveler Professor book series.  What research did you have to do to turn him into a character in these novels?

I spent nearly a week at the British Library going through handwritten letters. I read a lot of biographies and a fair amount of his other fiction and non-fiction, including his interaction with Houdini. Besides the two of them, I also read a lot of stuff on H.G. Wells and other authors from that time period. 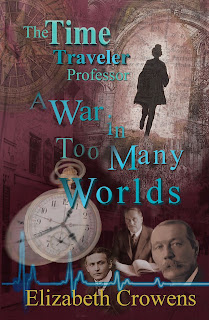 How does being a novelist influence how you enjoy reading the Canon?

If I'm researching how to create realistic dialogue and descriptions, I'm better off reading material written during that time period. It's the real deal, although I have to tone it down for modern readers.

I'd recommend that Sherlockians become familiar with some of Conan Doyle's other stories outside of Sherlock Holmes, along with some of his non-fiction works. Personally, I'm a fan of Doyle's ghost stories, Lot No. 249 being one of my favorites. I think it's also important to read a few biographies on Doyle. Not just one, but several, especially when Doyle assumed the role of a detective in the George Edalji and Oscar Slater cases. 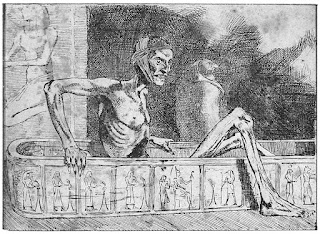 We can all agree that the pandemic has been a terrible thing in so many ways, but the one positive way that it's affected Sherlockiana is the ability to "Zoom" into meetings all over the world, connecting all sorts of people who are passionate about the Sherlock Holmes literary, film, and theatrical legacies.

Before the pandemic, it was impossible to attend everything. For me, even if money wasn't the factor, I wouldn't have time to write if I hopped on a plane to attend every scion function. Going forward, I'm hoping that people will consider hybrid options for those who can't always travel. The technology is there, and there are breakout rooms where people can chat with each other rather than passively watching a presenter on screen.

My God, it's Don Hobbs!*  If you've been around Sherlockiana long enough, you've heard that phrase.  That's because this week's Interesting Interview, the Maniac Collector himself, is known far and wide across our hobby.  And for good reason.  Don is one of the most energetic and welcoming folks you find in Sherlockian circles.  If you are around Don, you will immediately be pulled in to a fun and engaging conversation.

But not only is Don a great guy, he's also known for assembling the world's largest collection of foreign language versions of the Canon.  And in 2019, Don donated his entire foreign language collection to the DeGolyer Library Southern Methodist University in Dallas, Texas.  So what does Sherlockiana's Texas Tornado have to say about this hobby of ours?  Let's find out! 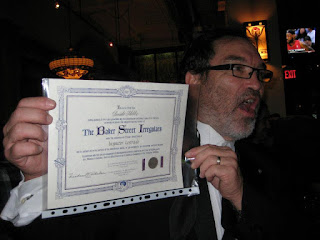 I believe a Sherlockian is anyone who enjoys any aspect of the Sherlock Holmes world. Books, films, plays, Sherlockian meetings all fall into the realm of being a Sherlockian.

I had been collecting Sherlockian books for a few years when I received a call from John Bennett Shaw. Somehow he had heard of me and invited me to the 1992 Un-Happy Birthday Celebration in Moriarty, NM along with an invitation to visit him at his Library. That was the crowning weekend where I became a Sherlockian. At the Un-Happy Birthday Celebration, I met John Farrell, Dick Miller, Ron De Waal, Saul Cohen and I decided these were people I wanted to be like. 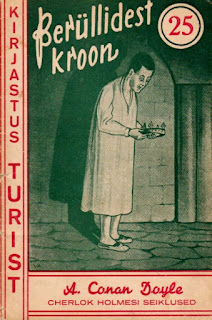 My favorite story is Silver Blaze. I believe that story shows Holmes' ratiocination the best. He inferred from the dog that did nothing in the night time, that the dog knew who stole Silver Blaze. Of course, the story itself is not plausible at all. The horse missing would be scratched from the race but hey, it's Sherlock Holmes. 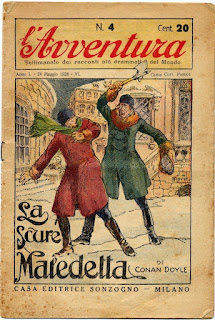 I was fortunate enough to amass a collection of foreign translations of the Canon, unsurpassed in the world. When I first visited John Bennett Shaw in 1992, he had translations in 60 different languages. I had just bought a Polish and a Spanish edition of the Canon. My thought at the time was 'how hard can it be to find the other 58 languages?' In the 31 years since that day, there are still 2 of those language I have never found - Kazakh and Sindhi. However, I did manage to find 73 additional languages. Today, the Canon has been translated into 113 different languages. 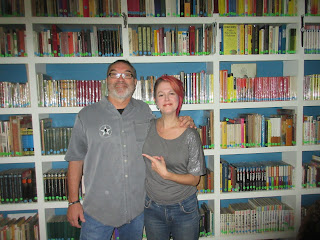 Several years ago, I created an electronic bibliography of foreign translations. The Galactic Sherlock Holmes is over 10,000 entries with cover illustration for over 95% of the entries. I still do a lot of research discovering old newspapers from around the world that serialized the stories. I keep finding these and then adding the cover illustrations along with the entries to the GSH database. 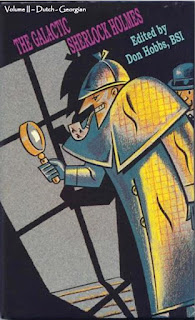 You've often been referred to as "the maniac collector."  What does that title mean to you?

When I began collecting foreign translation in earnest, I founded a scion society call the Maniac Collectors. I would find Sherlockians in other countries and send them a box of English editions. All I asked in return was for them to send me books in the language that they felt were of equal value. Of course the quote is from The Illustrious Client: 'He has the collection mania in its most acute form- and especially on this subject...'

What made you want to collect copies of the Canon written in different languages that you aren't fluent in?

I think the challenge was my primary driving force. I have been lucky enough to have had Internet access since 1989, when it was still called the World-Wide-Web. one of the first books I bought on the Internet was Cú na mBaskerville, the 1934 Irish Gaelic edition. I found it in a bookshop in Wales in 1993. I have used this essential tool since day one. 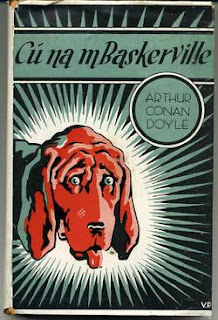 From Holmes to Sherlock by Mattias Bostrom is my personal favorite. The BSI Manuscript series is another excellent choice.

There have historically been up and down periods of Sherlockian enthusiasm however we have been on an extended up period. With the growth of social media, I don't see a lull for the near future. There are seems to be new blogs, new books, and new societies very month. I think in 15 years we will look back at the early 21st century as the Goldest of Golden eras. 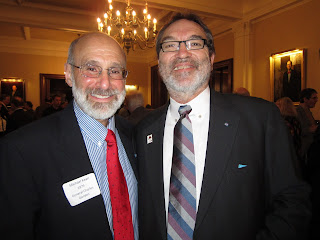 *If you're curious in the origin of this, you can see at the 8:10 mark in the following YouTube video: https://www.youtube.com/watch?v=PExb3cKwoXk&t=505s