I find Sherlockian history interesting, but the actual people who have participated in this hobby are even more fascinating and entertaining in my opinion.  And for my money, the writings by Christopher Morley and Vincent Starrett are always worth checking out.  I'm branching out from these two authors' Sherlockian writings to their larger bibliographies, but Morley just loves Holmes too much to stay away for long.

Christopher Morley is known among Sherlockians as the founder of the Baker Street Irregulars.  But to many others in the world, he was first and foremost and first-class writer.  His novel, Kitty Foyle, was turned into a Hollywood movie in 1940 and starred Ginger Rogers. 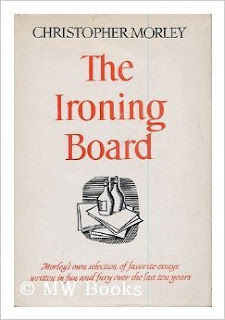 But for me, Morley's strength comes in his essays and short stories.  I've read a few collections and recently finished The Ironing Board.  I knew that this collection included "On Belonging to Clubs" in which Morley famously laments his small creation called the Baker Street Irregulars had grown into a movement with scions spread across the country.  This is only one paragraph in an eleven page piece and while as a Sherlockian, I call it a famous line, to most folks I guess it wouldn't be much more than a passing comment in a larger story of Morley's views on clubbing up back in the day.

But as I breezed through this delightful collection, I came across so many more Sherlockian moments that show just how deep Holmes was ingrained in Morley's lifeblood.  The short story "Time of Life" is a fun creeper that name checks The Hound of the Baskervilles and in which a character states that it is his job to notice what others don't. (Wonder where that line came from?)

A few pieces on and you come across "An American Gentleman" where Morley lays out the argument that Robert Louis Stevenson was a major influence on Arthur Conan Doyle's writing style. 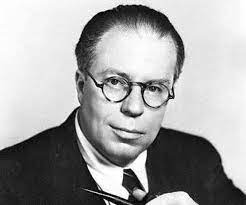 After that is the essay "A Christmas Story Without Slush."  In my naivete, I had always thought that Morley's comment about "The Blue Carbuncle" was just that - a comment.  But no!  There is a whole essay on the excellence that is BLUE.  A treat to read at any time of year, Doyle's story or Morley's essay about it.

Another fun turn in The Ironing Board is a few short stories starring Dove Dulcet, former literary agent and amateur detective.  This character now works for military intelligence and is helped out immensely by a certain London detective's sister.

"Watson a la Mode" is another essay that delves straight into the Canon.  In this one, Morley makes a case that Watson got out of the medical trade and made his money by going into dressmaking.  Some of today's Sherlockian essays can be pretty tongue-in-cheek, and you'll find the roots of that tradition in this 1946 piece.

So if you are someone who enjoys essays or literary ramblings, let me encourage you to track down the wider writings of Christopher Morley.  And don't worry, you may find yourself immersed in stories about a church that exists under a bypass or tributes to folks Morley finds important, but don't worry dear Sherlockian.  When it comes to Christopher Morley, sooner or later all roads seem to lead back to Baker Street. 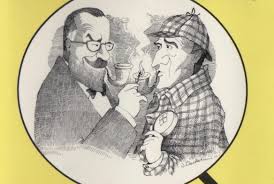 A few years ago, I got an email from Jim Hawkins asking for information about our  Holmes in the Heartland conference.  It was a new name to me but ever since then you could say that I hear of Jim everywhere.  Jim is active all over the Sherlockian Facebook groups and Twitter and he is always welcoming of anyone interested in this hobby of ours.

And Jim's gregarious nature comes through in spades with his biggest Sherlockian project to date, The Friends of John Bennett Shaw website and Facebook page.  Anything someone could say about Shaw would only scratch the surface of how influential he was.  And Jim has taken a great tack at such a large project, he brought everyone in to talk about Shaw.  But now it's time for Jim Hawkins to talk about Jim Hawkins, in this week's Interesting Interview! 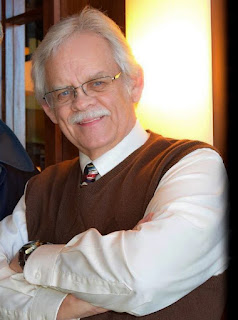 How do you define the word “Sherlockian"?

One who has more than a passing interest in Sherlock Holmes and the 60 stories written about him by Sir Arthur Conan Doyle. Some qualifiers:

a.  A Sherlockian has read the entire canon. I know that sounds harsh and leaves some folks out, but I believe it to be true.

b. A Sherlockian has gone beyond the stories and has read some of the annotated publications, seeking to fully understand the locale Holmes worked in, and the social settings he and Watson had to live in. Historical settings are key to understanding many of the stories.

c. A Sherlockian has joined a local scion society and made friends with other like-minded people. Being a Sherlockian is not a solitary kind of endeavor. At the least you have reached out to others to share what you have learned and learn what others want to share.

On my 40th birthday, my wife gifted me with the Baring-Gould Annotated Sherlock Holmes. Through that I learned that highly educated people across the country were having great fun in scion societies reading, discussing, and writing about the Sherlock Holmes stories. And I discovered John Bennett Shaw. I wanted to join that bunch of people—and I became a Sherlockian. 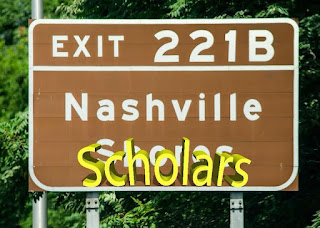 What was your profession and does that affect how you enjoy being a Sherlockian?

I am retired from 16 years with Southwest Airlines, and 12 years of employment with LifeWay Christian Resources as a music consultant prior to that. I traveled quite a bit with both jobs, and I was able to visit other scion societies across the country. I was also able to visit lots of great bookstores, where I immediately went to the Conan Doyle/Sherlock Holmes shelves.

It’s a double combo here. "The Final Problem" and "The Empty House." Those stories are eternally connected for me; one where Holmes disappears, and the other where he reemerges. 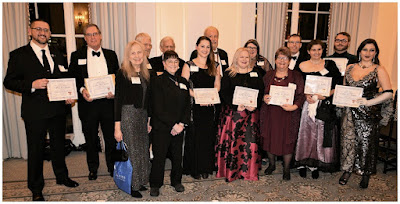 That’s easy! He is the first Sherlockian I ever knew, and the one I have created a website about: John Bennett Shaw. He is one of the most fascinating men I’ve ever known, Sherlockian or not. But I’m glad he chose Holmes to center his life around. What he did with all that is simply amazing. He changed the very nature of being Sherlockian.

I am a historian at heart, so I like to immerse myself in the historical setting of Holmes’ and Watson’s world—the Edwardian, and the Victorian eras. Conan Doyle was a genius at capturing the setting for his tales, and I admire today’s writers who can do that same thing, like Lyndsay Faye.

A recent article I wrote for the book, Referring to My Notes, was about Holmes’ Stradivarius violin. I thoroughly enjoyed getting into the world of luthiers from the 17th and 18th centuries, discovering the intricacies of fashioning an incredible string instrument that defies the years and sounds like it did 300 years ago when it was first made. 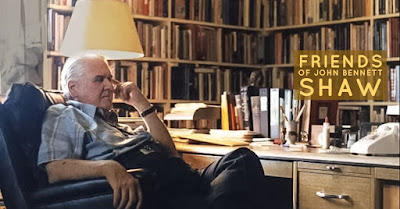 As curator of the Friends of John Bennett Shaw website, what should people know about such an influential Sherlockian?

Today’s Sherlockian should know how much we owe John Shaw for who we are as a collection of literary people--Sherlockians and Holmesians--and what we do in our scion societies today. He was universally loved and admired in the U.S. and wherever the Sherlock Holmes stories were read and discussed. He brought people together and made sure people new to our ranks found a place to thrive and grow. And he was gender-inclusive long before it became popular.

I must share how important it was to have encouragement from so many friends when I decided it was time to return to my roots in the Holmes world. I met so many new friends who knew John Shaw well when he was the BSI “Simpson”, the Sage of Santa Fe, and Big Brother in his Brothers Three of Moriarty scion society.

On the website there are testimonials about Shaw that point out his kindness and encouragement to everyone who wanted to belong. Mainstream Sherlockians like Peter Blau, Ray Betzner, Steven Doyle, Tim Johnson, Evelyn Herzog, and Susan Rice (I could go on and on) speak to how important meeting Shaw was for their own journey in following Holmes.

One quote stands out for me that gets to the heart of who John Shaw was, the one by Philip Schreffler: It is unlikely that any man since Arthur Conan Doyle himself has brought the authentic and Canonical Sherlock Holmes to so many people and so many people to Sherlock Holmes. And no man, including Conan Doyle, ever did it with such love. (Baker Street Journal, December 1990, Volume 10, No. 4)

You hadn't been as active in this hobby for a while and have come back in just recent years.  How has Sherlockiana changed since you first got involved in it?

Well, I was out of the mainstream for almost 16 years when I was traveling and working for Southwest Airlines. Fan groups like 221b Con and Baker Street Babes came to the forefront during the years I was inactive (on hiatus). So, the average age of someone who calls him/herself a Sherlockian has gone down dramatically. It’s wonderful to have these young people joining our ranks, no matter how they got here—via Cumberbatch, or Jonny Lee Miller and Lucy Liu, or Robert Downey, Jr. The interest film directors and television producers have brought to the world of Holmes has been amazing and encouraging.

For new Sherlockians I always recommend The Sherlock Holmes Miscellany by Roger Johnson and Jean Upton. Published in 2012, it is 223 pages (so close that magic number of 221) of “the essentials” everyone interested in the back story of our movement should know.

So many excellent books are being published nowadays, but devoted fans of Sherlock Holmes should not overlook the journals, blogs and podcasts being written and recorded weekly. I mention just a few: The Baker Street Journal (the BSI official journal, edited by Steven Rothman), The Sherlock Holmes Review (published by Steven Doyle at Wessex Press), Studies in Starrett (the blog published by Ray Betzner that focuses on Vincent Starrett), and the podcast by Steven Doyle, The Fortnightly Dispatch. Some of the finest writing and reportage on and about our hobby/obsession is found in these publications. 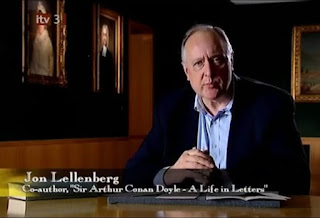 At age 77 I don’t look down the road very far. I am confident that we will see continued growth in our fascinating hobby, particularly in publishing and movies and television. I personally plan to make the most of my BSI investiture and participate fully in BSI gatherings. Two BSI friends encouraged me to do some writing, Dr. Marino Alvarez and Jon Lellenberg. Because of their nudging I now have a few articles out there in Holmes Land. I was thrilled and amazed to be able to attend my first Writers Cocktail Party, the one you and I attended at the invitation of Steven Doyle for the Wessex Press group the day before we were invested into the BSI on 14 January 2022.