Bearing Some Other Interpretation

This week found me taking in three different adaptions of Sherlock Holmes.

As planned, I took in "The Missing Three Quarter" for The Irregular Canonical Book Club.  Normally, I prefer to read the stories from one of my two most frequently used version of the Canon.  But, report cards were due this week, I am working on another writing project whose deadline is looming, and life in general didn't allow for a lot of reading time.  So I "read" this week's story via audiobook, specifically "The Complete Sherlock Holmes," read by Simon Vance.  I know there are many other versions out there, but Simon Vance's delivery is fantastic and I would highly recommend this version to anyone interested.  A good audio production of the Canon can be a nice change of pace now and then. 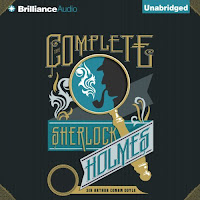 Speaking of audiobooks...  I don't typically listen to Sherlockian audiobooks, because if I'm interested in the book, chances are I will want to have a copy of it on my bookshelf.  I've gotten away from pastiche recently, and wasn't too terribly interested in "A Study in Scarlet Women" when it first came out.  But when my library audio service offered it, I thought I would give it a try.

I was expecting more canonical nods throughout the story, and left feeling a little disappointed because I wanted it to be more... well, Sherlockian.  "A Study in Scarlet Women" is a fine detective story with a good portrayal of what it was like as a woman on your own in Victorian London.  It felt a lot like Elementary to me, Sherlockian in name only.  These two incarnations really only use the name "Sherlock Holmes" and the idea of a detective as their starting points and create new worlds from there on out.  If you enjoy a good detective story, this is right up your alley.  But if you are looking for something closer to the Canon, you'll be left wanting. 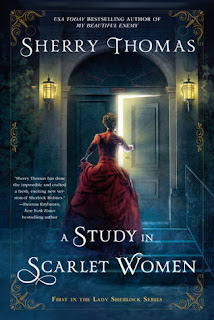 Finally, the weekend rolled around.  And it was time to iron my dress shirts on Saturday.  What can I say?  I'm a party animal.

I've found that a Jeremy Brett episode is almost the perfect running time for this chore.  And man, does it make ironing much more pleasant.  This go-round was "The Adventure of the Speckled Band."  And man, do I love Grimsby Roylott.  "Holmes the meddler!  Holmes the busybody!" 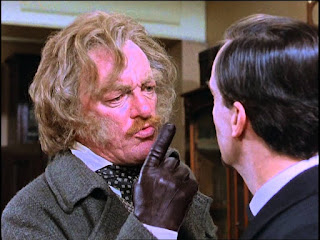 The Granada series is always a delight to watch.  Jeremy Brett is the quintessential Holmes and whether it's Burke or Hardwicke, you're getting a reliable, capable, and quietly humorous Watson.  I could sit for hours and just watch clips of these two in 221B; what an amazing set!  I could go on and on about this series, but my guess is that I would be preaching to the choir here. 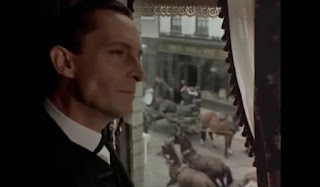 Anyway you look at it, there are some great ways to take in Sherlockiana and the Canon.  And the thing with these stories is that you can pick up new things from revisiting them or just let the familiarity wash over you.  How many characters and stories out there can we say the same about?  And that's why it's always 1895.
Posted by Rob Nunn at 8:36 PM