In Search of Whatever Chance Might Throw in His Way [STUD]

I've just returned from a family vacation to Walt Disney World in Florida.  I knew this trip was going to really cut into my Sherlockian activity time, so I made every attempt I could to make it a somewhat Sherlockian foray. 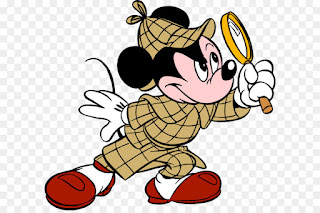 It's a long drive from southwestern Illinois to central Florida, so of course I got some reading in.  I enjoyed L.B. Greenwood's "Sherlock Holmes and the Case of the Raleigh Legacy" on the way down and "Serpentine Musings, Vol. 2" edited by Susan Diamond and Marilynnne McKay on my way home.  Both were delightful for different reasons and a nice addition to my Sherlock Holmes shelf on Goodreads.

The drive also allowed me to spend time editing my current Sherlockian manuscript.  I've been putting this off for some time now, so it felt good to get back to work on that!

But the first REAL Sherlockian event came in Atlanta.  I reached out to Heather Holloway on Twitter to see if there was anything Sherlockian of note to check out while we stopped over for the evening.  There wasn't, but she offered to meet for dinner.  Um, yes!  Ashley Polasek asked to join us, and a party was set!  (Side note: at the time, it didn't dawn on me that Ashley lives in South Carolina and she was offering to drive FIVE HOURS ROUND TRIP just to meet up with Heather and me!  But, Heather is definitely worth the drive.) 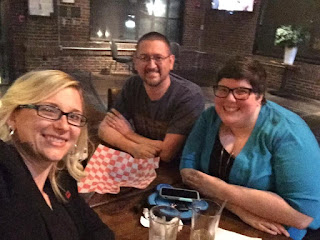 To recap that night's conversation would be rambling and nonsensical to everyone not there, but the three of us had a great time talking about everything from societies to thimbles.  I've talked with both of them online plenty of times, and interviewed both of them on this blog (Heather here, and Ashley here), but this was the first time I've ever gotten to meet them in person.  It was a true pleasure to meet other self-described "Sherlockian riffraff" and like many of my Sherlockian interactions, I look forward to many more!

Then, it was on to Florida.  Scott Monty posted about the lack of Sherlockian content at Disney a few years ago, and let me tell you it hasn't changed much.  I was bound and determined to find SOME connection though, so journey with me through the four Disney parks, desperately searching for something, ANYTHING Sherlockian:

Disney's Hollywood Studios:
There is NOTHING here.  Hollywood Studios is quickly becoming a Star Wars theme park, so I can't say I was too surprised.  But man, I really came up empty on day one.

Magic Kingdom:
I was going to do better here.  At first, I thought the best I would be able to do was see Tinkerbell and say that she was one of the Cottingley fairies.  But it got better.

After the nightly fireworks display, Magic Kingdom has a show called Once Upon a Time where they project images onto the castle.  It's a lot more interesting than I just made it sound, trust me.  At the very end of the show is a Winnie the Pooh segment, and the whole castle turned into a honeycomb that one might find at a certain cottage on the Sussex Downs. 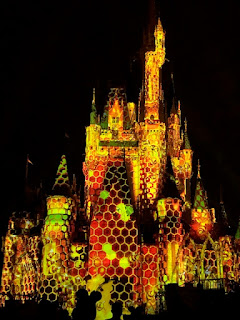 Animal Kingdom:
This looked like it was going to be another bust.  But then we went to go see Finding Nemo: The Musical.  And lookie there!   A stage full of lion's mane jellyfish.  Holmes' later years were really represented well. 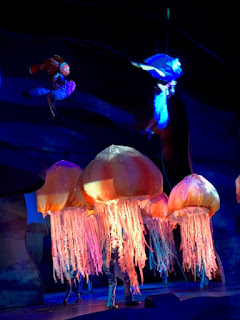 Mexico - No Basil, but I always do enjoy The Three Caballeros ride.

Norway - I guess you could say we were Norwegian explorers while we rode Frozen Ever After.

China - I don't consider Detective Pikachu Sherlockian, but I took a picture of this just in case I couldn't do any better 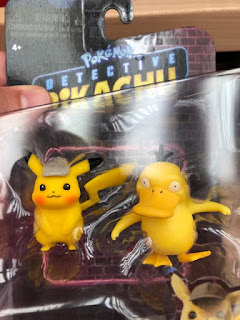 Germany - I could've written 'rache' on a wall somewhere but didn't want to get kicked out, but I did hear some German music, which is rather more to my taste than French or Italian.

Italy - No naval treaties or people disguised as old priests.

America - quartering of the flag? Nope.  Just funnel cakes and a Guardians of the Galaxy show.

Japan - Nothing for Miss Sherlock but there were a lot of cute teddy bears.

Morocco - A Persian slipper perhaps?  I could do better than that.

France - After a wonderful dinner here, I was really grasping at straws.  Coal tar derivatives?  Lady Holdernesse?  Telegrams ankle-deep?  Even Lady Frances would've counted at this point.  But non.

Canada - I searched the gift shop for boots to say that they were made for Henry Baskerville.  But no.

All of these getting to my best bet: the United Kingdom.  First things first: I checked the pub.  There wasn't anything Sherlockian there, but I did have a nice draft or two, so that worked for me.  I went through the tea shop, the toy shop, and the front half of the clothing shop.  Nothing Sherlockian.  But then, tucked back in the back corner of the back half of a shop was this: 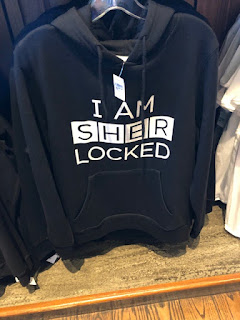 Well, that was all fun and games, but the real Sherlockian treasures awaited me when I got home a few days later!  Being gone for two weeks really makes your mail pile up, so when I had opened everything, I had plenty of stuff to keep me busy! And sometimes it's just nice to be back home with my books. 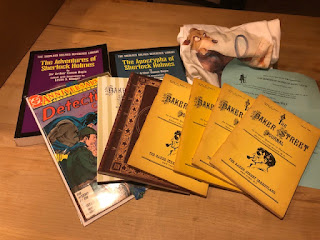