Oh, are you in for a treat today!  If you've been to a Sherlockian event in the past few years, this guy probably looks familiar.  And if you've been lucky enough to meet him, you know a fun batch of answers is coming up.  Mike McSwiggin is a low-key guy, but once you meet him he is a Sherlockian that you always want to talk to.  Self-deprecating, funny, and wildly knowledgeable, Mike is one of the most easy-going Sherlockians around and so great to spend time with.  But don't take my word for it; see for yourself in Mike's Interesting Interview: 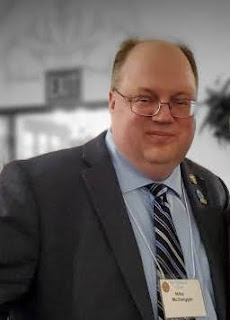 Well, the easy answer is to say someone who dissects the Holmes stories and devours the writings about the writings.  But to be honest, the deeper I get into the Sherlockian world, the more I realize that isn’t always the most accurate picture.  For some people, sure: they can quote the Canon like some invoke scripture.  And some seem to have read every theory about every idiosyncrasy ever published in a Sherlockian journal.

But others have little interest in the writings about the writings.  Some obsess over every film adaptation.  And others collect one type (or many types) of Sherlock Holmes bauble.  I think it really boils down to two traits: a Sherlockian loves Sherlock Holmes and enjoys being around other people who love Sherlock Holmes.  Where you fall in the spectrum doesn’t really matter.  And, frankly, if we all had the same background and the same interests, we would be a boring group of people who probably would just irritate each other.

I read the stories fairly early in school.  I came across Baring-Gould’s Annotated in the public library and I went from being a fan to becoming an addict.  As an adult, I went to some Sherlockian events, and enjoyed them all.  But it wasn’t until my friendship with the late Paul Herbert (founder of Cincinnati’s Tankerville Club and walking encyclopedia of Sherlockian knowledge) that I truly understood anything about the Sherlockian world or what I might add to it.

It changes frequently, depending on my mood.  For the moment, I’ll say HOUN.  There is so much right with this story, and the atmosphere cannot be topped.  Being a novella rather than a short story allows that atmosphere to build.  But unlike STUD or SIGN, the story remains linear.

And while some knock the story for having less Holmes, I think the proportion of Watson to Holmes makes sense, given the relationships and perspectives that needed to be built.  I seem to find at least one new aspect to enjoy with each re-reading.  My latest little nugget: bitterns are secretive birds.  Who knew?  I have no idea what makes a bird secretive, but I like knowing that the bird mentioned in the story has its secrets.

Ross Davies.  Ross is one of the most interesting people I’ve ever met, Sherlockian or otherwise.  He gives some of the most compelling speeches and presentations I’ve ever seen.  Whether speaking about World War I, the history of portraiture, or bobbleheads (I’ve seen him espouse upon all three), he knows how to tell a compelling story.

And that makes sense, as Ross is a law school professor.  He edits & publishes The Green Bag, a law journal that finds great excuses for working in Sherlock Holmes and Nero Wolfe quite regularly.  He now also edits & publishes The Baker Street Almanac, a great resource for Sherlockians (despite having things I wrote in there).

If you are on the fence about going to a conference, and you see Ross will be speaking, you should go.  And then do yourself the favor and get up the nerve to speak to him afterward.  I did, and I have been joyfully paying the price ever since.

Well, Rob, as you had me confess it in a book you co-edited, I am a chronologist.  I like reading about the lines of reasoning others have had in trying to date the stories.  And then I enjoy crafting my own answers.

For those who haven’t been exposed to this deviancy, know that the stories as they are written pose some problems with the dates as given by Watson.  Chronologists seek to divine the actual dates for the cases.  Chronology is the red-headed stepchild of the Sherlockian world.  I actually told someone at an event that I was a chronologist, and he unconsciously took a step backward.  Next time I see him, I’m going to tell him I am also a pickpocket.  I wonder if he will back up more or become relaxed?

Well, apart from the chronology stuff, I really enjoy crafting insane Sherlockian quiz questions.  Paul Herbert was infamous for his maniacally difficult quiz questions at the Tankerville Club.  While I don’t like an entire quiz to be made up with those kinds of questions, a few of them peppered among the normal stuff can be fun.

The key is to not limit yourself to information only found in the story.  That provides two benefits: it gives you a wider field of play and ruffles the feathers of people who want things to be boring.  Here is an example from a quiz I did for BLUE:

Apart from its meaning in the story (which is a type of cap), a Scotch bonnet may also refer to which of the following (circle all that apply):

A:)  a variety of chili pepper

B:)  a fairy ring mushroom

D:)  an island in Lake Ontario

And the answer is, in fact, all four choices.

As a student of chronology, do you think there will ever be a timeline of the Canon that everyone can agree on?

Absolutely not.  The average Sherlockian just won’t care.  And that diseased subset of Sherlockians called chronologists – we’ll just continue to fight.  Watson, through a combination of purposeful obfuscation and general poor note-taking, left us a real Gordian knot.  But that’s the fun of it.  If someone could devise a unified field theory for this stuff, it probably would have happened already.

And we would instead be arguing about why so many birds are mentioned in the Canon.

I love D. Martin Dakin’s A Sherlock Holmes Commentary, from 1972.  It is the total package:  it is extremely well-written, the facts cited are correct (I won’t name names here, but there are some works of scholarship with some factual errors – likely due to small or non-existent editing budgets), each chapter represents a different story, there are so many great discussion topics for each case, and each chapter starts off with affixing a date to the given case!

Dakin does a fantastic job of explaining how he decided on each date.  But don’t be frightened off, as the chronology discussion is just one facet of each chapter.  You do not need to care about chronology at all to get a lot out of this book.  Yes, it is out of print (like so many books of Sherlockian scholarship).  But you can pick up a decent reading copy for well under $20.  And short of an omnibus of the 60 stories itself, you will be hard-pressed to get a better value for your Sherlockian dollar.

If they have never read any Nero Wolfe stories by Rex Stout, I like to recommend Too Many Cooks, which is one of my favorites.  I am as much a Wolfean as I am a Sherlockian, and so like to cheer for the other team whenever I can.  Stout’s Wolfe stories are so well-done and under-appreciated.  Chandler seems to get all of the accolades for mid-twentieth century mystery writers (and, hell, I love his books as well).  But Stout took all of that pithiness and added a great sense of humor.

If they HAVE read Stout, I like to recommend Steve Hockensmith.  His “Holmes on the Range” stories featuring brothers Big Red and Old Red are fantastic.  Great writing paired with great humor.  I tend to despise westerns, so for me to recommend anything that could be remotely construed as a western is saying something.

I am making a conscious decision to answer this as optimistically as I can.  I hope we are able to build upon the influx of younger Sherlockians in the last few years.  Maybe they came for Cumberbatch, but stayed for the surprisingly fun literary discussion.

And in addition to the younger people, I hope we are able to reach more people of diverse backgrounds.  Different countries, different socio-economic groups, different ethnic backgrounds.  One of the few positives of this pandemic is attending online Sherlockian meetings and events with people from all over the country (and world).  I have really enjoyed hearing discussions with voices unfamiliar to me.

And I love hearing newly minted devotees of Holmes and Watson speak passionately about our shared hobby.  Their excitement is infectious.  If a Sherlockian event was full of people all with the same opinions, the same perspective, that would be brutally dull.

I just inadvertently came full circle to my answer to your first question, which means I probably should stop and pretend that I planned any of this out. 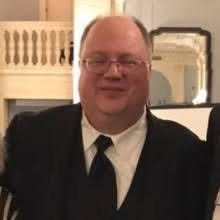