Mark Jones is a name that has become well-known in the American Sherlockian world over the past few years.  He's been a regular in the British Holmesian world, but we colonists are just getting to know him, mostly from his great podcast, Doings of Doyle, that he co-hosts with Paul M. Chapman.  You may have also seen his name pop up in the Baker Street Journal, Serpentine Muse, and Canadian Holmes.

I got to meet Mark in New York at the beginning of this year, and he is one of the most delightful and intelligent Sherlockians I know (and that's saying A LOT).  His knowledge and passion for Arthur Conan Doyle and the Sherlockian Canon are impressive, and his easy to talk to demeanor will win over anyone who wonders if they should check out some of Doyle's non-Sherlockian works. 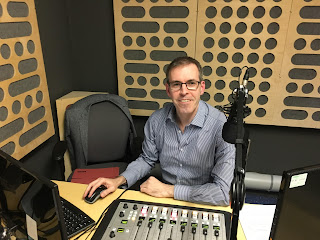 How do you define the word “Sherlockian”?
For me, a Sherlockian is someone who enjoys – and obsesses about – Sherlock Holmes in whatever form they have encountered. Given the nature of obsession, I would have thought most Sherlockians will have read some of the stories at some point: when I become interested in a new topic, I tend to hoover up anything and everything to do with it and suspect that is true of others. That said, I don’t see the need for ‘entry requirements’ before someone can be regarded, or regard themselves, as a Sherlockian. It’s a broad church and we all have our preferences. The more the merrier, I say.
How did you become a Sherlockian?
When I was ten years old, I used to watch repeats of the Basil Rathbone movies with my grandmother who loved them and black and white movies in general. My favourite was The Scarlet Claw (1944) which probably tells you a lot about my psychology.
Then, about a year later, I read the entire canon during a rainy three-week caravan holiday in Scotland and was hooked. I dipped in and out of the stories until the mid-nineties when my then girlfriend bought me the Baring-Gould Annotated (Reader, I married her). But I didn’t really become “active” in Sherlockian circles until 2014 when I met Paul M. Chapman and Teresa Dudley at a book fair in York, UK. They introduced me to their society, The Scandalous Bohemians, and it really took off from there. 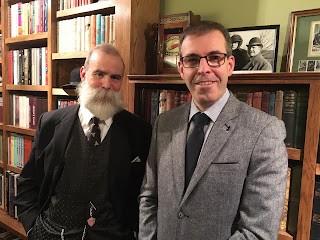 What is your favorite canonical story?
I’ve always loved The Red-Headed League (1891). For me, it captures the breadth and depth of the Sherlockian universe: the peculiar characters, London setting, deductions and revelations, camaraderie between our heroes, and humour. There’s a warmth between Holmes and Watson that feels absolutely genuine. It helps that the Granada adaptation, which was on TV shortly after I read it, is so good. Often when I think of the story (or indeed any story), Brett and Burke come immediately to mind.
Who is a specific Sherlockian that you think others would find interesting?
I’m fortunate to be a member of a great Sherlockian society called The Scandalous Bohemians, based in Yorkshire, UK. We’ve struggled to meet during lockdown and I miss my companions and our conversations very much. We have some brilliant, clever, witty Sherlockians of note in our midst and plenty more who have never been seen in print. It’s hard to pick anyone from their company, or indeed wider, but the person I’d suggest is Kathryn White BSI. Kathryn has been active in Sherlockian circles far longer than I have and always has an interesting and scholarly perspective on things. Plus Kathryn and David Stuart Davies are a pair so you get two for the price of one! 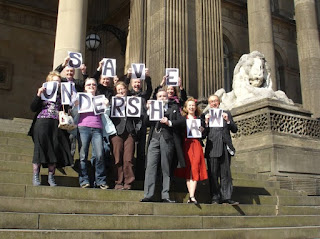 What subset of Sherlockiana really interests you?
It’s odd to think of Conan Doyle as a subset of Sherlockiana and not vice versa, but Conan Doyle it is.
One of the things that really fascinates me is the relationship between Conan Doyle’s life and wider work and the Sherlock Holmes stories. Taking this line often reveals new perspectives on the canon. For example, The Sign of Four (1890) is Conan Doyle’s third attempt at telling a story he toyed with in Uncle Jeremy’s Household (1887) and The Mystery of Cloomber (1888). The Sign of Four is the last and best of the trilogy but it didn’t arrive fully-formed – it has literary ancestors that cast it in a different light.
Other examples are Conan Doyle’s attitudes to alcoholism, which explains why he was so cautious about collecting The Adventure of the Cardboard Box (1893), and his views on divorce law reform, which feature in works like The Adventure of the Abbey Grange (1904). There is usually something from Conan Doyle’s wider work that makes you pause and think twice about what was actually going on in the Sherlock Holmes stories.
What things do you like to research related to Sherlock Holmes?
I’m really drawn to two things: puzzles within the canon and the influences on Conan Doyle. The first is played very much in the spirit of The Game while the latter is more akin to historical research.
For the former, I’ve always loved the writings of Professor John Sutherland, particularly his essays on puzzles in classic fiction of which "Is Heathcliff a Murderer?" (1996) and "Will Jane Eyre Ever Be Happy?" (1997) are probably the most famous. Most of the puzzles are not puzzles per se but questions unposed. I’ve set myself the task of writing one such puzzle for each of the sixty stories. So far, I’ve written about ten including pieces on Victor Hatherley’s thumb, spies in The Adventure of the Second Stain and coincidences in The Adventure of Black Peter.
As for the latter, I like to explore the things that influenced Conan Doyle to try to get closer to understanding the person behind the pen. I find him endlessly fascinating – a mass of contradictions. I can’t help but feel that we haven’t really uncovered the true Conan Doyle yet. There’s a darker side to Conan Doyle that is obscured by the stories he tells about his own life, and his wider fiction gives us glimpses into what that darkness might be. 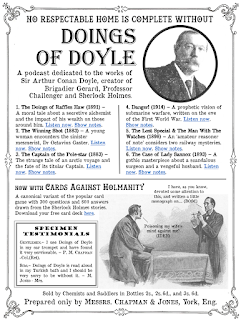 How did you and Paul decide to start Doings of Doyle?
When we met, Paul and I discovered that we were just as interested in Conan Doyle’s wider work as we are in the Sherlock Holmes stories. That’s not common in Sherlockian circles and so we were keen to connect with like-minded folk. We’re both keen radio listeners and thought that podcasting was a very immediate way to bring the works of Conan Doyle to a new audience. We were also inspired by the various Sherlockian podcasts, particularly Scott and Burt’s I Hear of Sherlock Everywhere and Trifles. We had a great start and then were locked out of our studio due to COVID but we’re now set up to record remotely and have three episodes about to go into production.
Many Sherlockians (myself included) don't pay much attention to Doyle's other writings.  What are we missing and where would you recommend we start?
If you are a Sherlockian who reads the canon then you will find that a lot of things that you enjoy about the Sherlock Holmes stories are also present in Conan Doyle’s other works. He has a tremendous ability to conjure up characters, settings and tone in a few words which makes him hugely accessible. This apparent simplicity is one of the reasons why academics have tended to undervalue his work, though that is now changing.
Conan Doyle really was the master of the short story so I’d recommend dipping your toe in the water with some of his shorter non-Sherlockian work. Probably the closest in feel to the Sherlock Holmes stories are his gothic tales which were recently collected in an excellent Oxford University Press volume, Gothic Tales, edited by the wonderful Darryl Jones. Within that large volume, there are the Round the Fire stories, written around the time Conan Doyle consigned Holmes to the Reichenbach. Many of them could easily have been Sherlock Holmes tales, with suitable adjustments. I’ve often thought about rewriting them with Holmes and Watson but I lack the fiction-writing gene (I’d happily edit a collection if someone is interested in the idea – hint).
What book would you recommend to other Sherlockians?
As much as I love his longer fictions, particularly The Lost World (1912) and The White Company (1891), I’d stick to the short stories. Go for one of the Brigadier Gerard collections or better still the complete edition. They contain some of Conan Doyle’s finest writing and provide the perfect balance of excitement, adventure and humour. We’re going to cover two linked tales in the podcast – How the Brigadier Held the King and How the King Held the Brigadier – which between them sum up everything there is to love in the Gerard stories.
We all know that Conan Doyle came to dislike writing the Sherlock Holmes stories and I think that fundamentally colours how we, as Sherlockians, see Conan Doyle. There is none of that with Gerard – Conan Doyle is having a whale of a time so they are joyful from cover to cover. I envy all who have yet to experience them for the first time – you’re in for a treat!
Where do you see Sherlockiana in 5 or 10 years from now?
Unlike our two heroes, the Sherlockian movement is not “one fixed point in a changing age” – it has always adapted and will continue to do so. I’m a historian by training so apologies if I overthink this but I see three “great ages” of the movement so far. The first saw the foundations of the BSI and the London Society, established The Game and set the camaraderie and scholarly tone. The second really took off in the seventies off the back of TV and Meyer’s The Seven Per-Cent Solution (1974) and led to the outpouring of pastiche as people felt empowered to create their own stories. The third has been the massive proliferation of adaptations and variants over the last twenty years which has brought entirely new audiences to Sherlock Holmes.
What’s interesting to me is their respective attitudes towards Conan Doyle. When reading the early BSJ’s, I’m always struck by how knowledgeably the founders write about Conan Doyle’s wider work – Christopher Morley wrote that Raffles Haw (the alchemist in The Doings of Raffles Haw, 1891) was a third Holmes brother for heaven’s sake! They seem rather less dogmatic and more playful with the concept of “the Literary Agent” than I think was the case during the second phase when The Game could get a bit po-faced. Now in the third phase, authorship is everyone’s and Conan Doyle is just one of many creators.
I suspect (and hope) Conan Doyle will be more of a presence in the Sherlockian movement in the coming years. Academics are now taking him more seriously, there is more interest generally in his wider work and there’s an enthusiasm to blend the boundaries around the things we include in our hobby which is all for the good. There are good things coming for Conan Doyle too: Ashley Polasek’s The Conan Doyle Review, the new Edinburgh Works of Conan Doyle and a new annual Conan Doyle meeting on the fringes of the BSI weekend. Paul and I will be doing our bit with the podcast. Whatever happens next, I’m sure it will be just as enjoyable as all that has gone before.