If you've been on a Sherlockian zoom meeting in the past year and a half, you're going to recognize this week's Interesting Interview.  Shana Carter is the woman who looks like she's calling in from a bookstore, but it's actually her own home.  Shana isn't someone who hogs the spotlight in these meetings, letting the more vociferous folks dominate the early minutes of every meeting when folks are asking if their microphones are on and wondering if the zoom link worked correctly.  But once it gets down to discussion of Sherlockian topics, Shana shines!

Shana is quick to offer up Sherlockian opinions that are always well thought-out and often researched.  Any conversation she's a part of is heightened by her presences.  She's been a frequent speaker at 221B Con and can hold court on most things cinema-related.  And on top of all of that, she is one of the most delightful people you'll ever discuss this hobby with!  So let's get to know the fount of Sherlockian knowledge: Shana Carter! 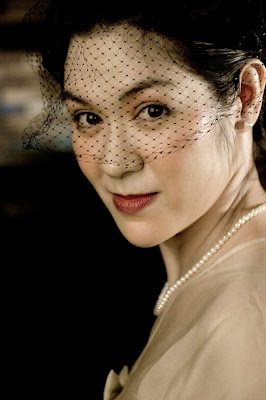 That's a tricky question. I'd say it comes down to the degree of investment. Ultimately, a Sherlockian is someone willing — perhaps "compelled" is a better word — to engage with Sherlock Holmes at a level beyond simple passive consumption.
How did you become a Sherlockian?
My path began at the age of nine (I think, I may have been younger), when my parents gave me a copy of The Complete Illustrated Sherlock Holmes, a volume which reproduces the stories illustrated by Sidney Paget as they first appeared in Strand Magazine. Then came the triple combo of Young Sherlock Holmes in 1985 (I was enough of a Sherlockian by then to guess the post-credits twist), The Great Mouse Detective in 1986, and the Granada Television series starring Jeremy Brett on PBS. 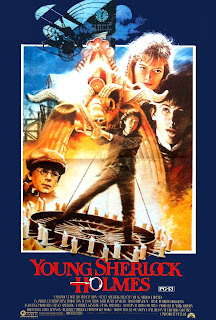 I discovered the rest of the Canon in my junior high school library and read it, then moved on to all the pastiches I could find. In college (Cornell University, B.A., class of 1997) I wrote a paper titled "Art in the Blood" on how the depiction of Sherlock Holmes was influenced by the Aesthetic and Decadent movements. In 2004, I created a Sherlockian "fandom overview" for Crack Van, a fanfiction community on Livejournal. I finally attended my first Sherlockian event in 2012, the Baker Street Babes' inaugural Daintiest Thing Under A Bonnet Charity Ball, which is where I learned that the annual BSI Weekend includes events other than the Dinner which are open to anyone.
What is your favorite canonical story?
It's probably something of a cliché, but "A Scandal in Bohemia" was my introduction to Sherlock Holmes and will always hold pride of place in my heart. It helps that it's a fun romp, what with all the disguises and Holmes's possibly over-complicated scheme. That said, I'm also a big fan of "The Problem of Thor Bridge," which I'd argue is the story that comes closest to being a "fair play" mystery.
Who is a specific Sherlockian that you think others would find interesting?
I'd encourage newcomers to Sherlockiana to look up Vincent Starrett. His book The Private Life of Sherlock Holmes is a delightful introduction to the Great Game, and he also wrote the lovely sonnet, "221 B": "Here dwell together still two men of note / Who never lived and so can never die..." I had a printout of that poem taped to the outside of my dorm room door in college. 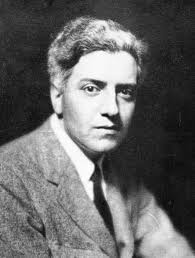 As for contemporary Sherlockians, I'm so glad to have met the Belanger brothers, Derrick and Brian, who founded Belanger Books and run the international online scion Five Miles from Anywhere (meetings the first Saturday of every month).
What subset of Sherlockiana really interests you?
Anyone who's seen me in a Zoom meeting knows I'm a bibliophile. My family moved from Miami to New York City when I was thirteen, which meant I could go to the Strand Book Store and the Mysterious Bookshop to feed my burgeoning appetite for pastiches and other Sherlockiana, like Otto Penzler's Sherlock Holmes Library. After college, I was lucky enough to work at St. Martin's Press for a few years, and brought home armfuls of free books. I still collect pastiches but my rate of acquisition has dropped a bit, partly because I've become a pickier reader, mostly due to space limitations. Unfortunately, as I've become more active in the community my interest in Holmesian scholarship has grown, so on balance I'm probably buying as many books as ever. 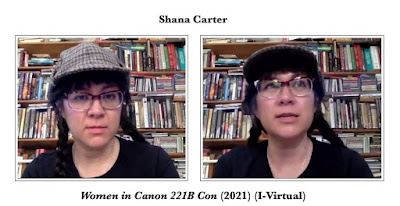 What things do you like to research related to Sherlock Holmes?
If I plotted my interests out as a Venn diagram, there would be several that overlap with Sherlock Holmes. In grade school I went through a phase where I was really interested in the paranormal: cryptozoology, ufology, parapsychology, and anything to do with ghosts. I was thrilled when I learned that the man who created Sherlock Holmes was also a member of the Society for Psychical Research and a Spiritualist. That said, anyone who's attended one of the panels where I discussed ACD and Spiritualism knows that I'm more inclined to side with escape artist and scourge of false mediums Harry Houdini, who I was already a fan of before I knew of his connection to Conan Doyle.
Incidentally, my favorite band is They Might Be Giants (they took their name from the 1971 film about a man who thinks he's Sherlock Holmes and the psychiatrist called in to diagnose him, Dr. Mildred Watson), who were playing in Atlanta, GA, the same weekend as the first 221Bcon; and I carry a torch for Buster Keaton, director and star of Sherlock Jr. 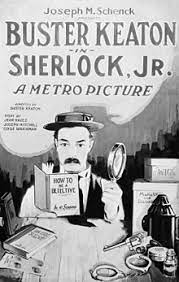 As a fan of classic movies, what are some of your favorite adaptations of Holmes and Watson from days gone by?
As a Sherlockian and a silent movie buff, I was thrilled by the rediscovery and restoration of the 1916 film adaptation of William Gillette's Sherlock Holmes and the 1929 German version of HOUN, Der Hund von Baskerville, both of which were long considered "lost" films. The Gillette movie enables us to see the first iconic portrayal of Holmes, but you can tell it was made when film technique was in its early days. The cinematography is far more sophisticated in the German film, which also has fantastic Baskerville Hall sets and a wonderfully unhinged Stapleton played by Fritz Rasp (familiar from Fritz Lang's Spione and Metropolis).
However, the gold standard may still be the 1939 Hound of the Baskervilles from Twentieth-Century Fox, first of the Basil Rathbone-Nigel Bruce films; it has a marvelous soundstage moor, plus the greatest canonical fidelity of that series and, as a corollary, the most competent version of Watson that Bruce would ever play. I also have to give a shoutout to Young Sherlock Holmes, my introduction to the concept of the AU or "alternate universe" (in this case, "What if Holmes and Watson first met as schoolboys and fought an Egyptian cult?") and the first time I saw a fully CGI character (not that I had any idea then what computer-generated images were, I just knew the stained glass knight was awesome in every sense of the word).
You've been on lots of panels at 221B Con over the years.  What is a topic you would love to speak on that you haven't had the chance to yet?
I'd love to discuss the overlap between Sherlockiana and the H.P. Lovecraft fandom. We could talk about August Derleth, who co-founded Arkham House to print Lovecraft's writings, and then created the Mycroft & Moran imprint to publish his own stories about Sherlock Holmes expy Solar Pons and weird detective fiction by other authors. There are also a surprising number of stories that combine the ACD and HPL canons in various ways, like Neil Gaiman's "A Study in Emerald." 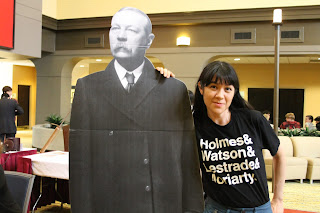 What book would you recommend to other Sherlockians?
I'm going to throw a curveball here by picking Naked Is the Best Disguise, by Samuel Rosenberg, who is to Holmesian scholarship what Hunter S. Thompson is to long-form journalism.
Where do you see Sherlockiana in 5 or 10 years from now?
I hope that Sherlockian societies continue to hold meetings via videoconference, or in a hybrid in-person/online format, on occasion; it's a great way to make events accessible for people who might not be able to participate for reasons of geography or disability.
Meanwhile, I hope that those Sherlockians who do most of their activity online — bloggers, vloggers, fanfiction authors and digital fanart creators — start archiving their work offline; the internet is wonderful for disseminating content but not always great at preserving it.
* Cover image credit to Steven Rosen Photography
* "Women in Canon 221B Con" screengrabs are from Howard Ostrom's Facebook group "Sherlock Holmes on Screens"
Posted by Rob Nunn at 8:12 PM