Scintillation of Scions is one of the big annual Sherlockian events, and this week's Interesting Interview will be a familiar face to anyone who's ever been in person or watched it online.  And you can probably even think of a few songs you've heard our interviewee sing as well.  For the longest time, the name Karen Wilson was one that I associated with high quality Sherlockian output, but wasn't someone I'd ever really had a chance to talk to.

This January, Karen was invested into the BSI and I was gobsmacked to find out that she hadn't been a part of the group for years or even decades!  I really got to know Karen two days later at the ASH Brunch when we shared a table.  What a delightful lady!  Seriously, you could not ask for a better person to spend a few hours with.  And for those of you who are lucky enough to know Karen, you'll know that her laugh will instantly bring a smile to anyone's face.  So get ready for the interview equivalent of a warm hug because this week's Interesting Interview is with Maryland's own Karen Wilson! 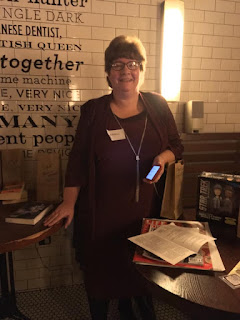 A Sherlockian is someone whose interest in the Sherlock Holmes stories (and the character) goes beyond mere enjoyment and into the realm of investing time, energy, and resources into the pursuit of “meta-enjoyment.” If friends and family are shaking their heads and rolling their eyes a little at your Holmes thing, you might be a Sherlockian.

Some collect and devour books of pastiches and/or Holmesian scholarship and/or Victoriana; some produce such material; many seek out online or in-person groups of like-minded individuals; all perk up at any apparent mention of or allusion to Holmes (however tenuous) in any context. I think you can be a Sherlockian without manifesting all of those symptoms at once, but most full-fledged (as opposed to budding) Sherlockians are guilty of at least one.

I was 14 years old, I think, when I saw on display at the local Waldenbooks Nicholas Meyer’s The Seven Percent Solution, new out in paperback and promising a meeting between Holmes and Sigmund Freud. Never having read any Holmes, but knowing that Freud was a real historical figure, I went home and asked my parents whether Sherlock Holmes had actually existed. Would you believe they weren’t sure? I bought Mr. Meyer’s book, hoping to find out, but I hardly got two pages into the story before I realized I was going to need to read some other books first.

I ploughed though the Canon in a summer and never looked back. Newspaper articles about The Seven Percent phenomenon featured interviews with Sherlockians from all-male scions who made it seem like that part of the community would never be for me, so I became a “solitary cyclist” instead. My shelves were soon filled with pastiches and scholarship found at secondhand stores (and the odd reprint ordered from Magico). I’d stay up till the wee hours on weekends to watch Rathbone & Bruce on some fuzzy UHF channel’s late movie show. I wrote Baring-Gould-compatible fanfictions in my head. And I never lost hope that I’d make a friend who was also a true fan.

Connecting with the wider Sherlockian world didn’t happen for me until the advent of home Internet access, but by then I’d been a Sherlockian for decades. 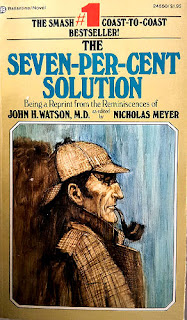 During the week, I’m a teacher of philosophy to undergrads; on the weekends, I’m a church organist & choir director. All that employment curtails the amount of travel I can do for the sake of the hobby, but I do what I can. Being a musician, of course, has hugely affected the way I play the Game (more below). And being a teacher has kind of made me a go-to quizmaster in several of my local scions. Since writing tests is pretty much What I Do, I’ve never minded.

I used to answer SCAN, without even having to think about it. As a musician, I couldn’t help identifying with the musician anti-heroine who thwarts Holmes’ dramatic denouement. But as I’ve aged, I’ve developed more of an affinity for poor Mary Sutherland of IDEN, unlucky both in love and (IMO) in her choice of detective! Mary is the anti-Irene, and if I write a fanfiction in my head these days, it involves some sort of justice for Sutherland. 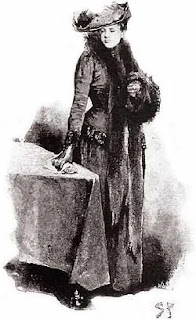 How can I choose just one? Okay, here’s a delightful chap: Brent Morris is a past Gasogene of my home scion (Watson’s Tin Box of Ellicott City, MD) and the spouse of the lovely Jacquelynn Morris, BSI. A celebrity in the worlds of both Freemasonry and magic, Brent is also a PhD mathematician and a terrific scion meeting speaker. His talks on cryptography and on the academic career of the dastardly Moriarty are among the best and most entertaining I’ve heard. As a fellow (if former) mathematician, I may be biased, but only a little. Brent gets the blend of fun and scholarship just right, and we mid-Atlantic-area Sherlockians are lucky to be able to claim him.

My special area of interest, as suggested above, is music. And I mean all of it: music in the Canon, music dating from the era of the stories, music associated with films and plays about the stories, and musical expressions of Holmesian fandom. I can’t claim expertise on every sub-topic, but last year I was privileged to be able to edit (with Alex Katz) the work of others who can. The fruit of our collective labors is the new BSI Press book, Referring to My Notes: Music and the Sherlockian Canon. 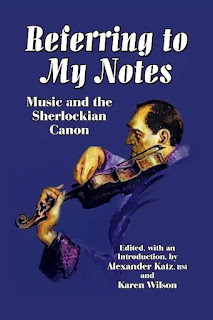 What goes into making Scintillation of Scions happen every year?

Until COVID, the answer was “an amazing committee of helpers, the generosity of folks who donate or create fantastic items for our charity bag raffle, the willingness of vendors to schlep boxes of books and other interesting Sherlockiana to sell, and the keenness of both veteran and first-time speakers to travel to Maryland (without the lure of an honorarium) to share their passion for Holmes and his world.” It also takes a certain amount of eagerness in the Sherlockian community to attend, since a non-trivial number of participants (more than 80) is required to cover expenses at a typical hotel conference facility. I would say that before 2020, I devoted 30% of my Scintillation energy to finding a slate of terrific speakers and 70% of it to worrying about attendance. The committee and vendors did the rest.

In the era of “Scintillation @ Home” via Zoom, the committee, auction, and vendors have all been put on hold. We’ve still needed the terrific speakers and the eager attendees, of course, but the other key element has been Zoom-meister Greg Ruby (with shout-outs to the also-helpful Monica Schmidt and Steve Mason). While finances are not a big concern (freewill donations have covered our expenses), I still worry about attendance: when you invite people to do the work of preparing a talk, you want to give them an audience!

This year’s Scintillation will be another (the last, I hope?) “Scintillation @ Home.” Back when commitments to a hotel would have had to be made for an in-person 2022 event, the COVID outlook was just iffy enough that I couldn’t confidently sign on the dotted line. We will be holding the event on Saturday, August 20, 2022, and if I ever get through final exams, I will be inundating the Internet with details. 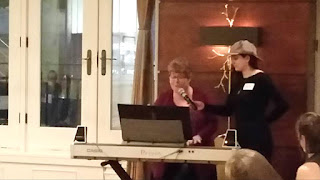 As a musical Sherlockian, how does that influence how you enjoy Sherlockiana?

I do enjoy the non-musical aspects of the hobby (reading, quizzing, nit-picking, drinking, etc.) just like anyone else, but music – parody song, for the most part – is the primary way that I contribute to the proceedings. In fact, the real question should be, “How does the fact that I am always on the look-out for songs to parody influence how I enjoy anything *else* in my life?” Often I’ll hear something that seems like Holmesian filk fodder, and I’ll have to go on a mad search for pen and paper before I lose my idea. It probably disconcerted my fellow patrons, but I was muttering possible rhymes for my Holmesian take on the Hamilton opening number on my way out of the theatre!

I never like to miss an opportunity to show the love for a curious Holmes-adjacent novel dating from 1984 and entitled W.G. Grace’s Last Case. It’s by the late, great Willie Rushton, and what makes it curious for a book that otherwise ticks all the pastiche-y boxes is that Sherlock Holmes isn’t in it! Instead, the titular cricket legend stands in for the Great Detective. Assisted by a post-Reichenbach Watson-in-mourning, Grace encounters a host of other famous Victorians, both real and fictitious, as he attempts to solve the on-pitch murder of a bowler he was facing at Lord’s. The story spans several continents and outer space (!), and I’m laughing out loud right now just thinking about it. 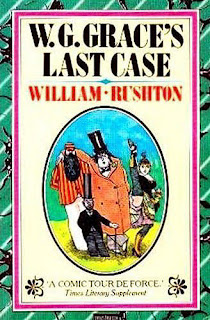 Perhaps I’m not a great one to ask, seeing as how my youthful self failed to predict that things would eventually go co-educational! But I do think that the rise of online meetings in the wake of the pandemic is a trend that will continue. As grateful as I have been for Zoom these last few years, I personally will always prefer in-person meetings, but I concede that they are less “democratic.” Younger Sherlockians who are (1) more comfortable with tech and things virtual and (2) less able to scare up the $40 -100 that some dinner meetings can cost (not to mention travel expenses) will surely want to keep the Zooming alive.