I Tried to Puzzle it Out

August 2nd.  That's when the black hole was formed.

Not a Stephen Hawking/Neil DeGrasse Tyson type of black hole.  No, we are dealing with a productivity black hole.  That's the day that I learned of Think Geek's new Sherlock Holmes puzzle.  I showed it to my wife, she innocently said I should get it and I ordered it.  The die was cast.  A week later, it arrived in the mail and I haven't been productive since then. 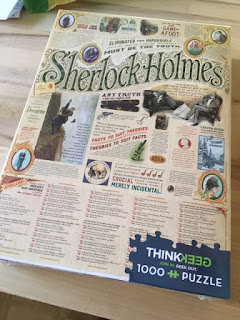 School starts in a week, I'm trying to be a productive member of my team participating in the John H. Watson Society Treasure Hunt, I'm in the middle of a good book, and I'd like to keep up with the rest of the world.  But the puzzle calls to me.

Doing puzzles has always been something my daughter and I have done together, but the biggest one we've ever attempted was 100 pieces and was Disney princesses.  So when she asked if she could help me with the 1,000 piece Sherlock Holmes puzzle, I gladly accepted her offer.  (I think she put about 4 pieces in total, but she sure did try) 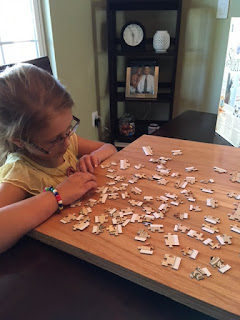 My wife noticed that she was all alone in the living room.  And she was sucked in as well.  Over the course of four days, if we were home, there was some combination of the three of us hunched over the dining room table working on it.

And this thing is big!  I had hoped to use a board game as a kind of mat and move it off the table so we could eat.  It's too big.  I brought up a big wooden platform from the basement to use.  It was still too big.  So I used both.  That worked for a day and half until I finally gave up and claimed the dining room table as my own. 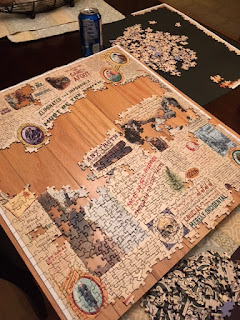 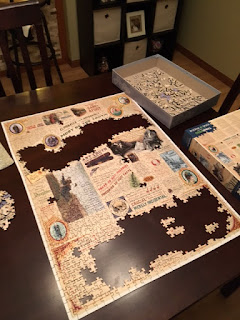 We didn't eat dinner in our dining room for three days because of this puzzle.

Here is where you would think I'd start complaining about how much space it took up, how it upset our family routines, or kept me from other things I should have been doing, but no.  I loved every piece of this puzzle.  It was a fun challenge as a Sherlockian, was the first Sherlockian thing my wife ever did with me (she still hasn't read my book! ahem...), and prompted some fun conversations with my daughter, at one point she decided she would "help" put the puzzle together by looking at the pieces with a magnifying glass. 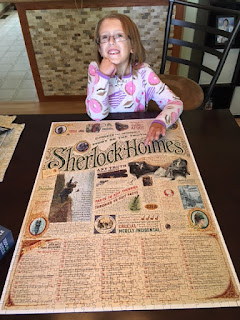 You don't have to have a strong knowledge of the canon to do this puzzle, but it sure makes it more interesting.  Quotes from the stories, biographies of Doyle and his characters, pictures, and a list of every case along with its guilty party make up the collage.  When my daughter asked, "Who is Frances?" I immediately knew it should go between "Lady" and "Carfax."  I saved the list of cases to do by myself at the end because I wanted to do it without looking at the cover on the box and use my knowledge to put it together.  I realized I know the order of The Adventures really well, and things get hazy after that.

But the absolute best part of this puzzle was once it was done.  Not getting my dining room table or leisure time back, but my daughter wanted me to read the puzzle to her.  She now knows that Sherlock's best friend was Dr. Watson, and Dr. Watson got married to a client.  She also knows what the word "client" means.  She knows that Holmes used science and has a brother named Mycroft.  And she wanted me to read the list of cases to her, stopping me to hear about ones that sounded interesting or ones she's already familiar with. 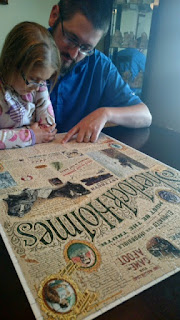 What started out as a mere intellectual puzzle, grew into something to while away the time, and ended up as what will remain a great memory of the occasion.