I Was Invited to a Week-End Gathering

First of all, I'm really excited to share the news that The Parallel Case of St. Louis scion society is hosting their first ever Holmes in the Heartland weekend on August 10-12!

This event is to announce the opening of the St. Louis Sherlockian Research Collection in the Rare Books Room of the St. Louis Public Library.  The weekend promises scholarly talks on Sherlockian topics, blues, BBQ, tea, history and lots and lots of camaraderie. Registration for the weekend will open in May, but mark your calendars now for a weekend of good times with some great Sherlockians! 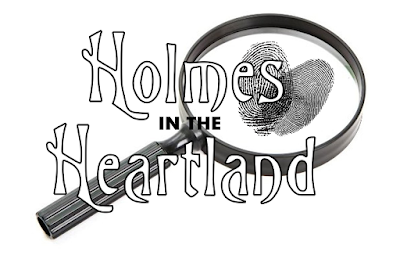 What I've dubbed The Irregular Canonical Book Club has really been a topic of conversation over the past two weeks!  I really just meant to set down a goal for myself to get back to the source material of our great hobby, but there are a lot of us out there who want to do the same thing!  So, I guess there should be a few ground rules:

1.  There is no set order, limit or structure to what you have to read to be part of The Irregular Canonical Book Club.  As long as you are going back and reading the Canon for fun in 2018, welcome to the club!

2.  The purpose of this is to motivate ourselves to revisit the Canon and to encourage others to do the same.  If you are looking for a weekly discussion on specific stories, The Hounds of the Internet email list is a great resource for structured discussion.

At our Parallel Case meeting yesterday, we talked about all of the adaptations coming to TV and the movies.  There are a lot!

Will Ferrell's Holmes and Watson will be in theaters in November.

Breakout star of Stranger Things, Millie Bobby Brown, will star in a series of movies based off of the Enola Holmes mysteries.

And Sherlock Gnomes premieres in movie theaters on March 23.  Burger King currently has toys to go with the animated movie in their kids meals, including a Holmes toy and a Watson toy. 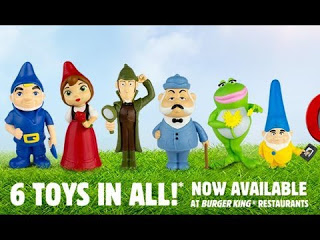 And here's where I'm in a conundrum.  The movie looks bad, really bad.  Lots of fart jokes, boring animation, and characters that strike me as both broad and bland at the same time.

But it's a Sherlock Holmes movie.  There's a part of me that still wants to go see it, just to support Sherlock Holmes getting out there, especially in a medium that introduces him to kids.  Sure, most of the kids are going to enjoy the fart jokes the most, but a few of them just might get a Sherlockian seed planted that grows into the next generation of Sherlockians that are writing books, attending scion meetings, and making great contributions to our hobby.

Luckily, I have a few weeks to decide.  Until then, I'll just pick up my Burger King toy to add to the bookshelf.
Posted by Rob Nunn at 7:18 PM