There is Moriarty Himself [FINA]

This month's Crew of the Barque Lone Star zoom meeting had Steve Doyle talking about Professor Moriarty.  At one point, he brought up all of the revisionist theories around the professor that seemed to start around the 1970's and haven't seemed to go away yet. 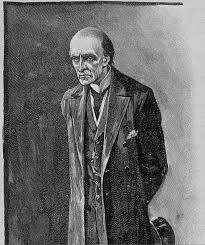 I'm all for having fun theories (I am the guy who wrote a whole book about Sherlock Holmes being a criminal mastermind, after all...), but when those theories start carrying weight, we should probably pump the brakes or else we will get "Martha" Hudson or Adlock as something that people just presume is canon.

One of the Moriarty theories that have always irked me is the whole "Moriarty was made up" idea.  I know very well that FINA has a lot of plot holes in it, but the idea that Moriarty was a complete fabrication holds up even less than the source material.  This theory makes all of EMPT false.  And what about the train that raced after Holmes and Watson across the continent or the news story about fire being set to Baker Street in FINA?  MacDonald's conversation about the professor in VALL?  This theory creates too many questions throughout a lot of the Canon. 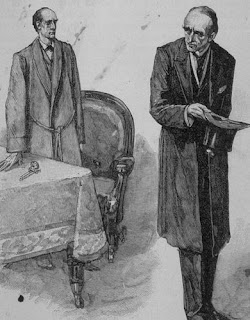 One thing that people like to point out is that Watson never sees Moriarty.  He only hears about him through Holmes.  Whether it's the meeting in Baker Street, the confrontation at Reichenbach, or description of the criminal empire, all of Watson's information is second hand.  Even the physical description came from Holmes:

"He is extremely tall and thin, his forehead domes out in a white curve, and his two eyes are deeply sunken in his head. He is clean-shaven, pale, and ascetic looking, retaining something of the professor in his features. His shoulders are rounded from much study, and his face protrudes forward, and is forever slowly oscillating from side to side in a curiously reptilian fashion. He peered at me with great curiosity in his puckered eyes."

But actually, Watson DOES see Moriarty twice.  Once as their train is leaving London and again as he walks back to the Englicsher Hof.  Of course, Watson doesn't say, "I saw Moriarty at the train station," or, "Moriarty stalked up the path to the falls," but we do get these descriptions:

"Glancing back, I saw a tall man pushing his way furiously through the crowd, and waving his hand as if he desired to have the train stopped."

"Along this [trail] a man was, I remember, walking very rapidly.  I could see his black figure clearly outlined against the green behind him. I noted him, and the energy with which he walked but he passed from my mind again as I hurried on upon my errand." 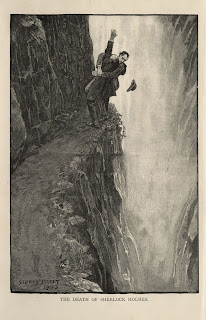 These men are later identified as Moriarty by Holmes.

If we give the "Moriarty was fake" theory any credence, we are supposed to accept a coincidence that a man that met Holmes's description of the professor was angrily trying to stop a train right as Watson looked out the window and ANOTHER similar man just so happened to be heading to the same spot that Watson had vacated in Switzerland?

That's the thing with retroactive conspiracy theories, we are supposed to be suspect of the source material but believe the new theory and all of its inconsistencies.

No thanks.  Watson may be feeding us a line here and there, but I enjoy it.  I'll take the doctor at his word. 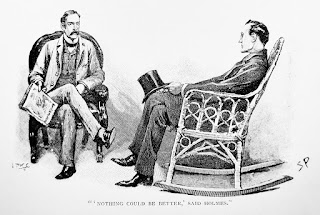