Get ready, folks!  This week's interview is with the Monty Python of Sherlockiana: Paul Thomas Miller.  If you're on Sherlockian Twitter, you are probably well aware of how brilliantly twisted the man is.  Whether it's making fortune-telling cards inspired by the psychic ghost of Silver Blaze, ruining the game of Guess Who? for his family, publishing a book about unbelievable Sherlockian facts, or adding delightfully deadpan contributions to The Watsonian Weekly, Paul's manic energy makes the internet a daily nuthouse for Sherlockians.

But he's not just insane; the man knows his Canon.  Paul put out a new chronology in 2019, based on the premise that everything John Watson says is the absolute truth.  He co-created a wickedly hard treasure hunt for the John H. Watson Society.  And his paper at the recent Shingle of Southsea meeting on Holmes and women was insightful and echoed sentiments of past Sherlockians.

Paul's canonical knowledge with his off-the-wall creativity would have been enough to warrant getting to know him, but Paul is also the driving force behind Doyle's Rotary Coffin, a Sher-, I mean HOLMESIAN group who celebrates any interpretation of Arthur Conan Doyle's most famous creation, no matter how outlandish.  And his latest book, Was Sherlock Holmes an Elephant? is such a perfectly executed piece of... well I don't want to ruin it for you.  Needless to say, Paul Thomas Miller is a real boon to our hobby and you're about to get a peek at how he works! 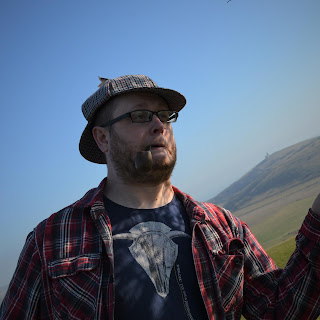 A Sherlockian is a Holmesian who lacks manners and goes about using first names when they haven’t even had a proper introduction.

A Holmesian is someone with a special interest in Sherlock Holmes. Whether that is the Sherlock Holmes of the original stories, a TV show, a film, pastiches or something else entirely doesn’t really matter. What matters is their enthusiasm for The Great Detective.

How did you become a Sherlockian Holmesian?

By degrees. I’d read some of the stories when I was younger but the real mania kicked in when the Benedict Cumberbatch series came out. When I watched A Study in Pink I kept recognising little bits from the stories I’d read. I think the “Rache” scene was the main one. That made me go back and read the entire Canon. I got hooked, wanted to know more and ended up reading a few bits of Writings upon the Writings. I fell in love with things like Dorothy L. Sayers “Hamish” theory.

Finally I read From Holmes to Sherlock by Mattias Boström. That introduced properly me to the wider Holmesian world. I joined The Sherlock Holmes Society of London, where I found everyone so welcoming and kind. But I wanted a local society to join too. When I couldn’t find one, I created my own – The Shingle of Southsea. I’m the only member and that suits me just fine – I cleaned up at the awards ceremony we had in May 2018. And I always win at the quizzes. We publish our minutes online after every meeting - http://shingleofsouthsea.blogspot.com/ 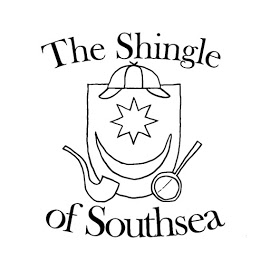 I refuse to pick. (But it’s Devil’s Foot. I can’t give you a reason, I just really like it.)

Who is a specific Sherlockian Holmesian that you think others would find interesting?

That is a nasty question. I’ve encountered very few Holmesians that weren’t wonderful people. There are scores of people who have entertained, welcomed and encouraged me, I couldn’t pick between them.

If I absolutely have to name just one, I’ll go with someone I don’t think gets the recognition they deserve – Auberon Redfearn. He’s a regular contributor to The Sherlock Holmes Journal and everything he writes is hilarious. I was lucky enough to see him give a brief talk about what the Amateur Mendicant Society might have been up to and I’ve been a massive fan ever since. 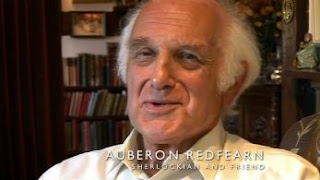 The eccentric ideas. The really strange ones that very nearly make sense. Was Mycroft Holmes an early android? Was Edward Rucastle a werewolf? Did Watson have a vestigial tail with which he could fire a secreted gun?

I’m not a specialist. I get obsessed with whatever has most recently caught my attention. Recently I had been doing a lot of research into the locations of the stories. Just before the COVID lockdown, I took a trip to the area where Devil’s Foot was set and visited some of the locations David L. Hammer identified.

I wasn’t entirely convinced and ended up doing my own research, which was a lot of fun. So, since then, I’ve been working my way through locations for all the stories. Sometimes they match up with other people’s identifications, sometimes they don’t. Now I’m just waiting for lockdown to be lifted so I can go visit as many of them as possible. 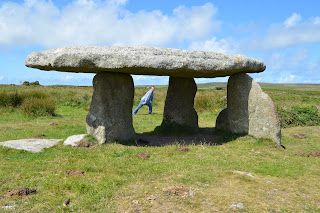 How did the Sherloft come into existence and what are some highlights from it?

The Sherloft is my little den at the top of the house. It was originally a sort of recording studio – I have some chums who come round a few times a year and we attempt to make music. We fail but have fun trying. 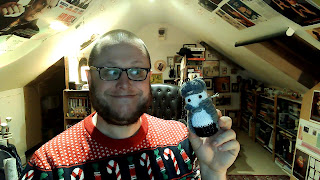 When I started getting into Holmes, one shelf of instruments got turned over to my Holmes bits – a few books and DVDs. But the collecting mania had a hold of me. So the one shelf grew into the entire shelf unit. And so it went on… Soon one entire side of the loft was Holmesian and I still didn’t have enough room. Eventually I gave in, called it The Sherloft and just went with it. I got rid of a few guitars and the sofa that used to be in there and squeezed in as many bookshelves as I could.  Now all the wall space I can get to is covered in posters and framed records and every nook is stuffed with Holmesian books and trinkets. 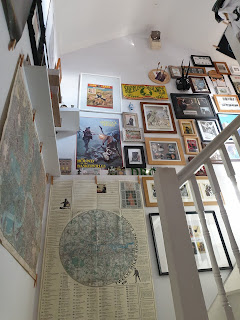 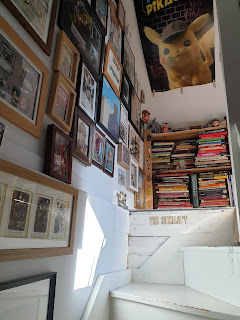 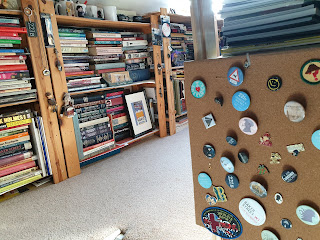 Picking highlights would be difficult. I’m very fond of my Daffy Duck candle holder. But I’m also quite proud of my reindeerstalker that I made for Christmas. But one highlight? I’ll say the dust. I refuse to dust in the Sherloft in homage to Robert Stephens’ Holmes in The Private Life of Sherlock Holmes. He uses the thickness of the dust to date when he acquired documents. I use it to date when I acquired nik-naks. 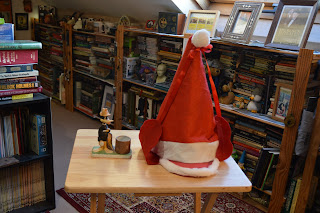 Over the past year, you've put out four books at extremely low prices.  How are you able to coordinate such a workload and why is it important to you that the books be so affordable?

There’s always time for Holmesian nonsense. Especially during a lock-down. Finding the time to coordinate projects isn’t a problem. Resisting the urge to do more is the problem.

The books you’re talking about are The Doyle’s Rotary Coffin ones. Doyle’s Rotary Coffin started as just a silly way of celebrating Holmeses that most people aren’t keen on (*cough* Will Ferrell *cough*). But it organically developed into being about inclusivity and encouragement. Those books are about encouraging people to try their hand at writing, sharing as many different ideas as possible and showing people that having fun just to have fun is a good thing. I didn’t want to make a profit from them, I just wanted to share them, so they are on Amazon for the cheapest they allow – I don’t get a penny. But they are also available through the DRC website as free PDFs. I just want to spread fun and encourage people not to get too cross about Holmesian theories they don’t agree with. You can enjoy stuff without agreeing with it.

There are too many. I could easily list a hundred. If I have to name just one, I’m going to plump for a fiction which I think it is amazing but I don’t hear enough people talk about: The Incredible Umbrella by Marvin Kaye. It masterfully addresses what happened to “Mr. James Phillimore, who, stepping back into his own house to get his umbrella… was never more seen in this world.”

The future, assuming there is one, is full of so much potential and mystery that it is difficult to say. However, with the assistance of my spirit guide – The Psychic Ghost of Silver Blaze – I have been able to draw back the veil and can reveal what time has in store for us. 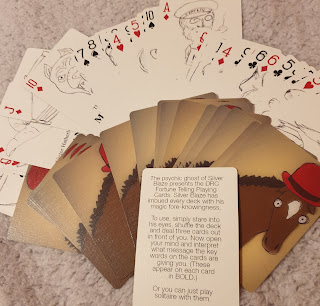 Sherlockiana will be rocked to its foundations by the advent of bio-cybernetics. We will all have robot arms that look like space-Swiss-army-knives. These will connect directly with our brains and, without our knowledge, slowly rewrite our DNA so that we all become two to three inches taller. From this new vantage point, Mrs Ethel Ripley of 2 Hipster Close, Flangehamton will spot a travel-worn and battered tin dispatch-box on top of her wardrobe. She will get it down and discover it has “John H. Watson, M.D., Late Indian Army” painted upon the lid. With trembling hands, she will slowly open the box, only to discover it is packed full of an even worse strain of COVID.

Or, in short, I have no idea. Can’t wait to find out, though! 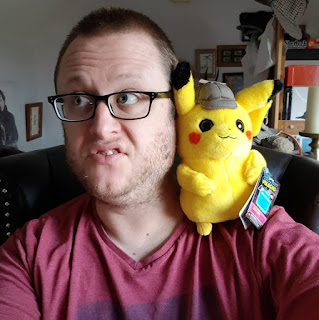