This week's Interesting Interview is with Pj Doyle, longtime Minnesota Sherlockian.  Pj has been a cornerstone of the Norwegian Explorers of Minnesota for years and years, working closely with the University of Minnesota's Sherlock Holmes Collections.  She fills her days with volunteering for the American Red Cross.

I got to meet Pj at the Birthday Weekend in 2020 and found myself gushing over how much I loved the book she co-edited, The Baker Street Dozen from years back.  It was one of the early scholarship books I read after I'd finished the Canon and it set the bar for every other piece of scholarship I would read after it.  If you don't have a copy, I would highly recommend adding it to your collection! 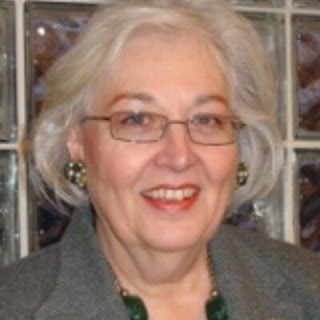 As a word, Sherlockian serves as a whimsical descriptor of one who embraces the Holmes stories made famous by Arthur Conan Doyle.   Beyond reading the adventures, a true Sherlockian returns again and again to the pages of the Canon for sustenance and inspiration.  The addiction most often broadens into all forms of media and fosters the compulsion to collect something that personally reflects the individual’s addiction.  No apologies are needed, no judgements set down in Sherlockian circles.  Sherlockians embrace one another’s fixation and revel in their mutual dependency.

I first met Mr. Holmes in 1955 in Sister Mary Grace’s 4th Grade class.  "The Red-Headed League" was the reading assignment included in a volume of Prose and Poetry for Appreciation.  I was intrigued and made it a point to investigate other Sherlock Holmes stories at the Highland Park Library.

As I pored through pages over lunch hour the next day, Sister pounced and demanded to know what I was reading.  Trembling, I explained my fascination and was amazed to discover that she not only permitted but encouraged me to continue.   She lauded my initiative and her praise made me expand my library forays to the rest of the Canon.  I saved up allowance and within several months was able to purchase my own Doubleday.

What were your previous professions and did they affect how you enjoy being a Sherlockian?

I am retired.  Over my working years, I served in government, marketing and prior to retirement, served as Managing Director of Mixed Blood Theatre in Minneapolis.  The eclectic resume is reflective of the broad spectrum of interests that find their way to Holmes.   In my case, the titles may have changed, but over the years, I am pleased to say that my values remained reflected in the mission and visions of each position.

In retirement, I remain on the Theatre Board and am an active volunteer with the American Red Cross.  The values and principles serve me well as benchmarks and guideposts as I navigate life.  The loyalty and justice that are embodied in Holmes and Watson are completely consistent with values I hold dear. 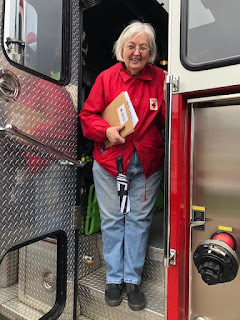 My favorite is the adventure that I am currently reading.   I must admit that I do find myself re-reading BLUE a couple of times each winter, and I have a special place in my heart for REDH – which brings me back to my parochial school days every time.   Of the novels, I admit to a preference for VALL, which is home to my investiture – Ettie Shafter.

The egalitarian nature of Sherlockian meetings is a great strength.   Who is interesting? Each one.  I encourage you to sit at the table with new faces.  Sit next to someone and listen to their story.  You may find yourself in conversation with an Uber driver, a Nobel scientist, a librarian and a high-school student.   Each will delight and inspire you.

I have often traveled afar and alone.   There are two things that have served me well to pass time and blend in.   A knowledge of bridge – being the 4th in a pick-up game is a golden ticket.   The second is having a copy of the Canon.   Kevin Bacon aside, there are usually far less than six degrees of separation between a stranger and Holmes.

As the years have mounted, so have the stacks of books, ephemera, and Sherlockian gear.  I am not quite as unfettered as Shaw (who likened his collecting to that of a vacuum cleaner on high).  I do have a good-sized selection of toys and youth versions of the Canon.  As a past president of the Minnesota Writers Workshop and a card-carrying member of the Beacon Society, I appreciate the role that Holmes plays in encouraging young folks to read.  I vividly recall how it felt to be praised by Sister Mary Grace.   I believe that we and our future in general are best served by youth who are learning to read and deduce. 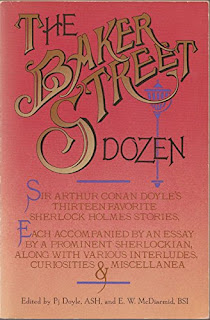 A cornerstone book in so many Sherlockians' libraries is The Baker Street Dozen.  How did you choose the contributors for it?

E W McDiarmid (Mac) and I were in conversation about the approaching centenary of the stories.   As we explored possibilities, we settled on the list that Conan Doyle compiled.   I worked with an agent to prepare proposals for a variety of approaches.  From a simple reprinting of the list with a forward to explain the competition that accompanied Doyle’s list, to a more robust selection with essays from noted Sherlockians.

Fortunately, our agent was able to present the latter to Contemporary Books.  Though they eschewed illustrations (which we suggested from the U of MN Special Collections), they were excited about the prospect of essays and interim additions (best of lists, forward, afterward..)  We had already approached a couple of contributors when the proposal was being shopped.   When we were enthusiastically invited to proceed, Mac and I sent letters to folks that we each thought would be interested.   We were pleasantly surprised and not one person declined.  We never made it to our B list   In fact, that is how we ended up with the thirteenth (baker’s dozen…) essay. 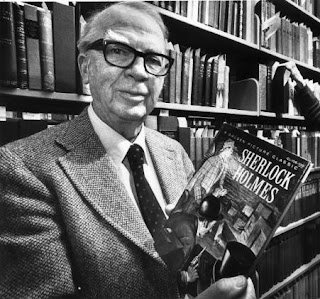 As someone who worked closely with E.W. McDiarmid, what should newer Sherlockians know about such a stalwart from this hobby?

Mac was truly a gentleman and a scholar.   The epitome of that phrase.   As a librarian, he was well read.  As a Sherlockian, he was welcoming, encouraging, and supportive.  His respect for the game was infectious.  He was also a smart cookie.   His ability to build relationships was at the seat of Special Collections at the U.  The Sherlock Holmes Special Collections are world renowned and available to all.  Mac’s dedication to learning and the library were the foundation.   From the beginning of the Norwegian Explorers, Mac made sure that all were welcome – women as well.  Long before the BSI invested women, the Explorers were populated with X and Y chromosomes.

There are myriad Holmes-related books.   Read ‘em all.  Support authors!  But, first of all, pick up a used copy of the Canon.   I recommend a Doubleday edition.   Now re-read the stories with pencil in hand.  Jot notes ask yourself questions and deface it from cover to cover.   It is a living thing.  Have a conversation with the pages.   As a reference, you will find it invaluable.  Your thoughts are freshest as you are in the midst of re-reading a tale.

One of my greatest treasures is the Doubleday volumes that Mac gave to me.   The two-books set that he had scribbled in over the years.   As I reread the tales and stop to make a note, or to read his, it is like having one of our one-on-one conversations again.   It is a treasured gift.

Each generation finds Holmes in his or her own way.  Some met him in the Strand, some through Prose and Poetry for Appreciation in parochial school.  For others it was on the radio through Edith Meiser scripts.   Some chose film as their doorway – Eille Norwood, Basil Rathbone, Brett or Cumberbatch. The internet, anime and electronic games entice others.

As human beings, I expect we will continue to reach forward in new ways to communicate.   With each step forward, hopefully there will still be a pull to the past.  It is in that desire to consider the grace and ease of another era that can bring a sense of calm to our chaotic lives.  What we consider novel today will likely seem old school before long.  If we build on those values of loyalty and justice and the Canon itself, we should be in good hands.