In "The Engineer's Thumb," Colonel Lysander Stark is our main antagonist.  While not one that is normally listed as a best villain in the Canon, I think we are doing this malevolent German a disservice.  What we have in this story is a baddie who may actually be a template for so many others to come later on in the Canon.

We are told repeatedly that Stark is thin, German, and a colonel.  Another villain whose thinness will be accentuated?  Professor Moriarty.  A dangerous German?  Von Bork.  And a deadly colonel?  Colonel Sebastian Moran. 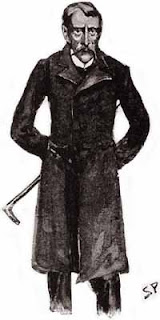 I admit, there's nothing ground-breaking there.  Being thin isn't a major component of villainy, colonels aren't well-regarded throughout the Canon, and people from other countries are usually dangerous according the Conan Doyle.  So let's look a little closer at Stark.

The colonel has done his research before reaching out to Victor Hatherley, knowing that he is an orphan, a bachelor, and lives alone.  Beddington will do the same such research before he reaches out to Hall Pycroft in "The Stockbroker's Clerk."

Of course, we all know by now that when a stranger offers someone too much money for a simple job, things are suspicious.  This strategy will be used again in "The Stockbroker's Clerk" and "The Copper Beeches." 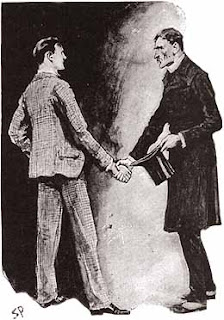 But Victor Hatherley isn't as smart as we are, and he agrees to go with Stark to his secluded house (cough, cough, "Wisteria Lodge") by way of a long, quiet, and disguised carriage ride like the one that will be repeated in "The Greek Interpreter."

Once there, Stark will be betrayed by a woman in his household, supposedly someone who in on his schemes, as she tries to warn away a man in danger.  Sound like Beryl Stapleton from The Hound of the Baskervilles?  Sorry, that story won't be written for nine more years.  So let's stick with "The Engineer's Thumb." 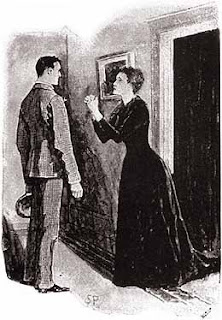 Hatherley soon learns that Stark is a counterfeiter, just like Killer Evans will be in "The Three Garridebs."  But Colonel Stark is so fierce that he is not opposed to killing someone to achieve his mission, sort of like Hugo Oberstein in "The Bruce-Partington Plans."

Elise tries to stop Stark from killing Hatherley, insinuating that he has promised not to harm anyone after the last time.  We will see James Wilder make a similar promise to his father later in "The Priory School." 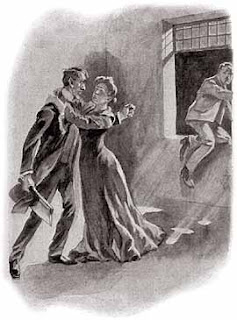 While listening to this story.  Holmes says Colonel Stark is "a cool and desperate man."  Jack Stapleton (HOUN) and Baron Gruner (ILLU) will both be described as "cool" by Holmes in later stories and George Burnwell (BERY), Giuseppe Gorgiano (REDC), and Von Bork (LAST) are all called "desperate."

We learn that Colonel Lysander Stark is actually an alias.  But so is the identity this villain is using in town.  The locals know him as a patient staying with Dr. Beecher.  A villain pretending to be a resident patient?  I'm sure that idea won't be used again.

And this "Dr. Beecher" is actually Stark's accomplice, who turns out to be softer-hearted than the colonel had counted on.  Just like Jack Woodley will find out about his accomplice in "The Solitary Cyclist." 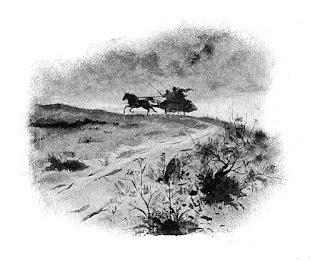 So while Stark may not be a top villain, I think this cleaver-wielding criminal should be recognized for laying the groundwork for so many malefactors that would come after him.  Let's all give Colonel Lysander Stark a big thumbs up.