The Sign of Four is such a pivotal story in the Sherlockian mythos and chronology that a lot of us can rattle off it's highs and lows pretty easily.  As I was reading it again this month, I realized that it had been a while since I'd actually READ this story, it's just one of those that's always part of conversations but I hadn't actually spent time with it from start to finish in years. 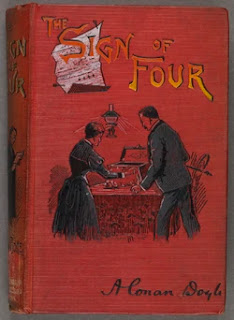 And like many novels of its day, there are some terrible aspects to it.  Listening to Watson and Small talk about Tonga and Jonathan Small's retelling of his time in India is rough.  But once I compartmentalize those aspects as historical relics, I find that I'm left with my favorite story of the Canon.  I can't tell you how many times I've read this, but each time I'm surprised that I appreciate new things and some of my favorite aspects of this book still make me smile.

Of course, there's the famous opening scene of Holmes's cocaine and Watson's watch.  For whatever reason, it hadn't dawned on me until this read-through that Holmes DID take the cocaine before he started analyzing the watch.  That's coursing through him as he tells Watson his brother's life story and while he hears Mary Morstan's problem.  It made me wonder what more he would have been able to decipher from the watch if he hadn't injected and if his mind was dulled during Mary's exposition, causing him to miss anything that could've helped out later on. 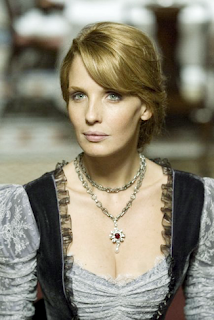 And yeah, Holmes is high when he's diagnosing Watson's brother's past, but man is he callous when he does so.  We often see Watson wear his heart on his sleeve in the Canon, but here it it ripped open with every word Holmes says.  Neither of them are happy with the other one after this.  Thankfully Mary cuts through the tension with her case, but that tension still lingers after she's gone.  Watson calls Holmes an automaton and inhuman and he criticizes Watson's emphasis of emotional qualities.  If a new case can't completely smooth over all of the hard feelings, chances are that they were pretty raw after the watch incident.  We can only thank Mary for intervening, because if the conversation had been left to its natural course, words may have been spoken that couldn't have been taken back.  Mary Morstan may have actually saved the partnership of Holmes and Watson.

Speaking of Mary, I never noticed how often Watson tips his hand about their future in this story.  "To this day she declares that I told her one moving anecdote as to how a musket looked into my tent at the dead of night, and how I fired a double-barreled tiger cub at it."  "I have marveled at it since, but at the time it seemed the most natural thing that I should go out to her so, and, as she has often told me, there was in her also the instinct to turn to me for comfort and protection."  "She has told me since that she thought me cold and distant upon that journey."  Watson is telling the reader in these lines that he and Mary are together years after this story takes place.

Every time I read this book, I despise Thaddeus Sholto more and more.  This guy sucks.  I have a mystery to tell you, but please give me a medical exam first.  We will need to go talk to my brother but I'm going to make everyone listen to my story first.  It's time to leave, but let me "deliberately" wind up my hookah.  My brother died, but I'm only worried about being a suspect.  And this line is the worst one of all: "Had your father, Miss Morstan, refrained from throwing a strain upon his heart, he might have been alive now.”  When I retold The Sign of Four in The Criminal Mastermind of Baker Street, one of my favorite parts was having Watson punch this guy in the face.  He deserved it.

“'God bless your sweet calm face!'” she cried, with an hysterical sob.  'It does me good to see you.  Oh, but I have been sorely tried this day!' Our companion patted her thin, work-worn hand, and murmured some few words of kindly womanly comfort which brought the color back into the others bloodless cheeks."  This is Bartholomew Sholto's housekeeper being soothed by Mary Morstan.  I love that this aspect of Mary's character carries on through the years.  In fact, Watson will tell us that "folk who were in grief came to my wife like birds to a light-house." (TWIS)

And soon enough we get to meet one of the best characters in all of Sherlockiana: Toby!  Holmes knows how great he is.  He calls Toby a good boy before their task has even started.  As soon as he starts, Toby is whining eagerly as he trails the creosote.  As he gets out into town, other dogs pay him attention, but Toby is fixated on his task.  He's not doing this just because Watson gave him a lump of sugar.  This dog knows his stuff.  And when he gets to his barrel of creosote, Toby is looking for appreciation from Holmes and Watson.  Does he know he got onto a different trail?  No, he just knows that he followed the scent like he should.  And Holmes and Watson burst into an uncontrollable fit of laughter at the end.  Toby has finally brought these two back together after the previous day's strain!

We soon get to meet another great character: Jack.  “'Dear little chap!' said Holmes, strategically.  'What a rosy-cheeked young rascal!  Now, Jack, is there anything you would like?'  The youth pondered for a moment. 'I'd like a shillin',' said he.  'Nothing you would like better?'  'I'd like two shillin' better,' the prodigy answered, after some thought."  Jack contributes nothing to the mystery or it's conclusion, but what a delightful exchange we get to have before Holmes is back to collecting clues!

And finally, the boat chase.  Conveying action on the page isn't always an easy thing to do.  You can feel the wind as Holmes and co. chase after the Aurora on the Thames.  When Tonga's dart and Holmes and Watson's pistols fire, you are on the edge of your seat.  I'm always ready to groan when they lose ground because of the other boat pulling out in front of them!  This whole segment is masterful writing, and I always feel exhilarated when I read it. 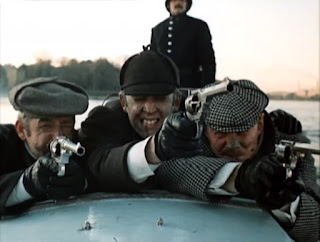 SIGN has been built up over the years for many reasons: racism, drug use, Watson's marriages, three-continent Watson, etc. but appreciated for what it's supposed to be, this book is still a ripping-good yarn.
Posted by Rob Nunn at 7:30 PM