“Light-houses, My Boy! Beacons of the Future!

This week finds me at the end of my favorite part of the school year.  For the past two weeks, I've been teaching about Sherlock Holmes and the mystery genre to my fifth grade class.  Two things I'm passionate and deeply interested in are Sherlock Holmes and education.  For these two weeks, they merge into hours of lessons where my students are engaged and I am in the zone!

I won't go into depth here as to my lesson plans.  If you are interested, they are written in depth on my classroom webpage.  What I want to talk about is the infectious joy that is flowing through my room in relation to the great detective and reading in general right now. 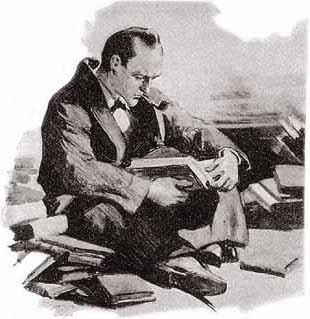 In the past two weeks, we've covered The Blue Carbuncle, The Red-Headed League, The Speckled Band, The Copper Beeches and a Scandal in Belgravia as a whole class.  Most of these stories warranted two days of instruction, one day where the kids read with partners focusing on one or two thematic questions, and the second where we read as a class and discussed particular story elements. 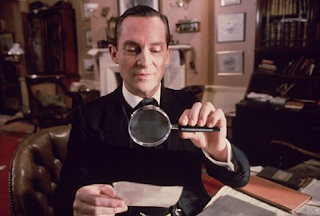 I've been jotting down lines I've heard from kids as they read with their partners:

BLUE: "This must be where the term 'wild goose chase' came from!"

SPEC: "Why in the world would she sleep in there?  This is SO creepy!"

SCAN: "A smoke bomb? This dude is crazy." 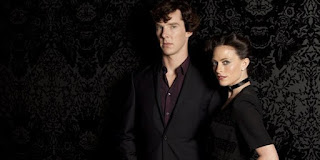 I always close the reading unit with A Scandal in Bohemia because it lends itself to such great classroom discussion.  We stop to brainstorm ideas to get the photograph back from Irene Adler which sometimes makes me marvel at how decivious fifth graders can be!  This year, a big debate flared up when I asked if Holmes accomplished his mission at the end of the story.  No matter what side of the debate the students ended up on, they all agreed that Irene Adler came out on top in the whole thing.

But it hasn't just been all reading.  On Monday, the students will perform two plays for the other fifth grade classes based off of The Blue Carbuncle and The Red-Headed League.  Watching these Midwestern kids try to employ British accents is always a hoot. 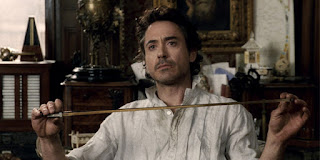 After watching the trailer for Sherlock Gnomes, we discussed other ways that Sherlock Holmes can be portrayed.  From there, the students started going through a two-week writing process to create their own Sherlock Holmes story.  When I first announced the project to them, the kids were audibly excited to write!

And these stories are really good.  Some of them are great mysteries.  Others have a five year-old Holmes investigating a robbery at a candy store, and another has Holmes fighting a ninja.  (It's titled Sherlock Holmes Fights a Ninja).  After discussing the elements to the mystery genre, the only requirements I gave students were that they had to have specific story elements found in most mysteries and that there had to be a character named Sherlock Holmes in their story. 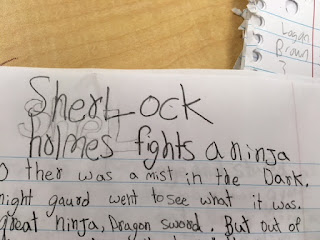 What I got for their finished products were so different and fun, I actually woke my wife up while I was reading a story one night because I was laughing at it so hard.  This particular story has Holmes investigating a robbery from an Egyptian pyramid by a villain named Egypt Ian (that's great!).  He resurrects King Tut, Holmes foils the plan, Egypt Ian gives a long explanation why he did it, and King Tut just shrugs his shoulders, and answers "Meh."

Do I expect all 26 of my students to become ardent Sherlockians after this unit?  Absolutely not.  From a purely educational standpoint, I expect them to have a better grasp of story structure, the writing process and reading fluency.  But, hey, if they pick up a copy of the Adventures of Sherlock Holmes to read over Thanksgiving break, who am I to stop them? 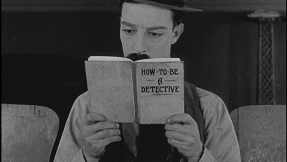