I Shall Be All Anxiety 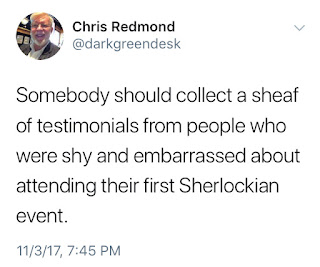 Many of us shared our own short versions of our first nights in Sherlockiana in response to Chris's tweet Friday night.  I won't go too far into mine, as I've already shared it on I Hear of Sherlock a few years ago.  My favorite part of the conversation was one Sherlockian telling us that he ripped the seat of his pants TWICE on his first night.  That makes for a memorable evening!

This conversation got me thinking.  Is social anxiety a common feature of Sherlockians?  We are a literary bunch, so introversion wouldn't be out of character.  On the other hand, we are very sociable with one another at our gatherings. 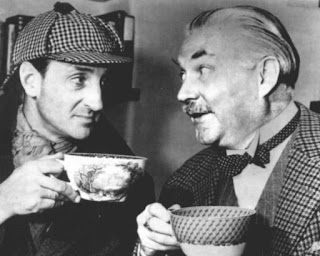 So, why are there so many stories about us being nervous our first time?

And for some of us, it's not just the first time we meet.  I've written about how much I love my local scion, but there are some days where I'm all nerves on the way to a meeting.  Social anxiety sucks.

But it makes me wonder if this is a larger phenomenon among the younger generation of Sherlockians and people as a whole.  In the 50's, or the 80's, or anytime before the internet, really, if people weren't comfortable in social situations, they mostly stayed home.  Now we have a culture where we can be connected, but still isolated.  But when our connections are based in a common interest, it's a natural step to want to meet with others who share your interests.  And that is where people are stepping out of their comfort zones. 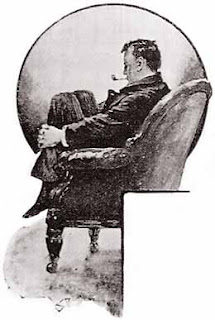 Events like 221BCon in Atlanta never would have existed before the internet.  People from all over the country descend on Georgia each year, many times only knowing others as their online personas.  My bet would be there are more than a few attendees there that would admit to having social anxiety. 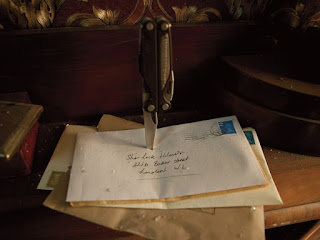 But this is a new day and age.  Now, we can get our BSJ in the mail, participate in Ashley Polasek's #221Movie tweetalong with her college students, spend hours reading on the new Sherlockian.net, upload your own fan fiction to AO3, and all other kinds of Sherlockian activities from our home.  But it's those real life, human connections that are so great.

So, even if you're a member of the old guard or a millennial and you suffer from social anxiety, get out there and spend time with other Sherlockians in real life.  Because, for every story of someone ripping their pants in the Twitter conversation, there were a dozen stories of people being welcomed with open arms to a community of people who all share the same interest, even if it is a little out of our comfort zones sometimes. 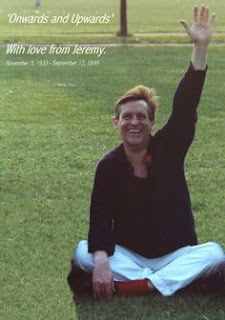