Every generation has "that" Sherlockian.  The one who poured so much of their lifeblood into our hobby that they have become a cornerstone of Sherlockiana.   William Baring-Gould, Richard Lancelyn Green, Leslie Klinger.  For those of us who have come into Sherlockiana in the past ten years, Mattias Bostrom is that cornerstone.

If you're reading this blog, you probably already own his Agatha Award winning, Edgar Award and Anthony Award nominated tome, "From Holmes to Sherlock."  As far as I am concerned, it is the best Sherlockian book that has come out since I've been a Sherlockian.  Mattias could easily rest on his laurels and know that he has made a major contribution to Sherlockiana, but the man immediately jumped into another large project, "Sherlock Holmes and Conan Doyle in the Newspapers," an exhaustive collection of any and all mentions of Sherlock Holmes or Arthur Conan Doyle from the newspapers of their day.  The series currently has 4 volumes, covering 1881-1884, with many more in the works.

And if reading Mattias' work isn't enough, you can also hear him!  This year, he started his own Sherlockian podcast, Talk About Sherlock, where he does a deep dive into a different and under-reported Sherlockian topic each month.  He is also a regular contributor to I Hear of Sherlock Everywhere with his segment "As We Go To Press," which gives the news of Holmes and ACD from a random date in history.  And I hear tell that we can hope to hear him popping up on The Watsonian Weekly sometime soon.

But until then, here is Mattias Bostrom with his opinions on Sherlockiana! 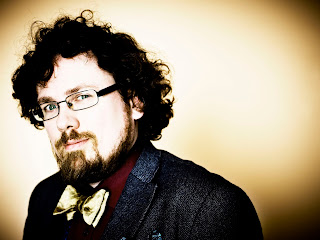 I prefer not to do that. Defining it may remove all the magic and atmosphere that surrounds it. The closest I have come to a definition of the word is in "From Holmes to Sherlock" – and I literally mean the whole more-than-500-page book. I just can't define it in fewer words. And what's interesting is really not the definition, but what you put into the word.

Nothing in the definition of the adjective or the noun "Sherlockian" tells about the feelings connected with the word. It's like the iceberg – you can only define 10% of the word, the rest is hidden in your own emotions. Those emotions differ, depending on who you are and when and why you think about it, but those emotions are the true meaning of the word, not any static definition.

It's the classic boy-or-girl-meets-Sherlock-story, but with an encyclopedic twist. I had been reading Holmes stories since I was ten years old, over and over again. But when I was sixteen I happened to read about the Sherlockian world in a book, and I totally fell in love with the quasi-academic side of it.

As long as I could remember, I had been eating knowledge for breakfast, lunch and dinner. Always when I was out walking with my grandfather, I said to him, "Ask me something". I wanted him to test all my knowledge in history, geography, science, etc. When Sherlock Holmes took over my life, it evolved slightly – my grandfather didn't have to ask me anything, I told him everything about Holmes anyway. This was my new knowledge. 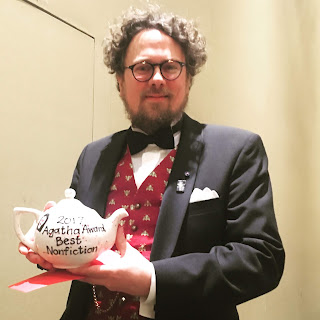 I have answered The Red-Headed League so often on this question, so I hope it's true. But if I ask my emotions, it is definitely my favorite. It's got that combination of weird humor and a great plot. Humor means so enormously much to me, and when absurd humor can be spotted in a Holmes story, I can only love it.

Who is a specific Sherlockian that you think others would find interesting?
Definitely Paul Thomas Miller. He is bringing so much clever and unexpected humor into the Sherlockian world, and we really needed him when he turned up in our lives a year or two ago. Sherlock Holmes can be serious business sometimes, but Paul always makes us remember the fun of it.

This is how he presents himself on one of his blogs: "Paul Thomas Miller is a long-time Sherlock Holmes devotee and contributor to The Baker Street Journal and other Holmesian publications. He lives in Portsmouth not far from where Arthur Conan Doyle wrote “A Study in Scarlet”. He spends most of his free time reading or writing about Holmes in The Sherloft at the top of his house. Surrounded by Holmesiana, this is where his Holmesian obsession is allowed to play out without testing the patience of his wife and two boys. Paul has formed his own Holmesian society; The Shingle of Southsea. So far the society has one member, who did very well at the society’s 2018 awards ceremony. The society has no plans to expand its membership but does publish its monthly meeting’s minutes online (shingleofsouthsea.blogspot.com). Paul can be found on Twitter under the name @baronvonbork."

His monthly meeting's minutes are hilarious, and his many theories on Canonical things are intelligent and fun. Paul is also the founder of Doyle's Rotary Coffin, "a society formed for the sole purpose of whole-heartedly and contrarily enjoying stupid Holmesiana regardless of how canonical others consider it to be."

Every generation of Sherlockians needs a few really fine humorists. Paul Thomas Miller is one of the best we have. 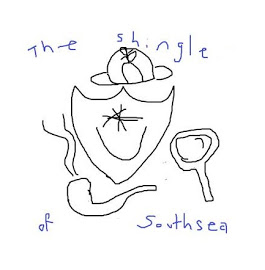 The real life part of it. I want to know how everything is interconnected. How people repeatedly influenced each other in the Sherlock Holmes history, and how that turned Holmes into a continuing success. I want to know more about the historical connections between actors, producers, writers, Conan Doyle estate people, and fans. For me that is the best way to explain why Holmes is still such a success. It's all about people.

Haha, is there anything I'm not researching? When reading nonfiction books I always start with the list of sources at the end of the book, checking what interesting and unusual sources have been used – and I can get REALLY excited from that!

I would say that some 80% of my Sherlockian activities consists of researching. A lot of my research is in newspapers from the late 19th century and the first half of the 20th century, but I also search in other online archives. And I spend a lot of money asking archives to scan correspondence or whatever for me.

Often, when I see a Sherlockian friend asking for information on Facebook or Twitter about some historical matter, I check some of the best archives to see if I can help in any way, and I normally find some useful newspaper articles, etc. 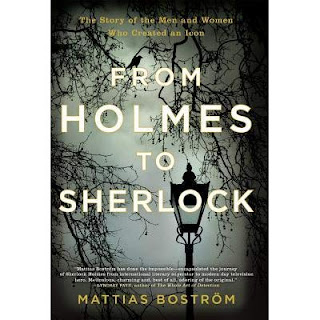 What was the hardest part of putting together "From Holmes to Sherlock"?
Believe it or not, it was actually quite easy, mainly because of luck. When I started the project I made a long list of things I wanted to include in the book, and when looking at that list today, it is very obvious how little I knew about the Sherlock Holmes history at the time. I knew the headlines, but I had very vague knowledge about the facts. So I just started researching things.

e.g. Where could I find information about H. Greenhough Smith, editor of the Strand Magazine? Because I knew nothing, but I really wanted to write about his personality and life. I searched the newspaper archives. And, through Google Books, or in De Waal, or thanks to friends recommending sources, I found a book or magazine issue that included the information I needed. Either I could find it scanned online, or I ordered the book. I spent some $3,000 to buy this kind of literature – often totally non-Sherlockian – about important persons in the Holmes history. I then had an enormous amount of research material, which I just had to structure in a sort of chronological order.

But there was a huge hole in this construction – and that was the part Conan Doyle's children were playing in all of this, after the death of their father. And here comes the luck: the Conan Doyle archive in Portsmouth, consisting of the late Richard Lancelyn Green's gigantic collection, included thousands of documents (letters, business reports, etc.) from Adrian, Denis, and Jean Conan Doyle. Those documents had at that time (2012) just been organized and made available for researchers, and I think I was the first writer or researcher to be interested in looking at much of that material.

It was there that I found the core of my book, and it turned into a thriller about copyright, and also explained pretty much all the important decisions made from 1930 to the 1970s – why certain films, TV series, and plays were made, why Adrian and John Dickson Carr wrote the Exploits, and much more. This was the story that explained why Sherlock Holmes was kept alive and became big business after the death of his creator, instead of maybe slowly disappearing from the minds of the readers.

How do you decide on your monthly topics for "Talk About Sherlock"?

Sometimes it's an old idea that I've never turned into an article. And sometimes I just happen to find an interesting matter while researching something else. The closer I get to the deadline, the more creative I get. I try to present something that many of the listeners haven't heard about before, but I realize that such an approach will be impossible in the long run. We'll see how the podcast develops, it's too early to say. 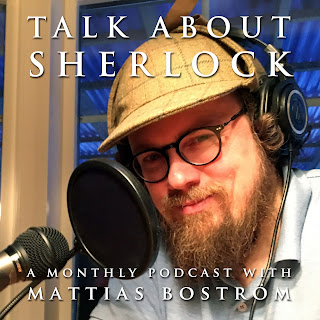 What book would you recommend to other Sherlockians?
The two I use the most are Brian W Pugh's "A Chronology of the Life of Sir Arthur Conan Doyle" and "Arthur Conan Doyle: A Life in Letters", edited by Lellenberg, Stashower and Foley. I constantly find new details in them, both about Conan Doyle and the Sherlock Holmes success.

But the book I would like to recommend is one that easily might be missed by newer Sherlockians, "The Uncollected Sherlock Holmes", by Sir Arthur Conan Doyle, compiled by Richard Lancelyn Green, a Penguin paperback from 1983. It's a compilation of parodies, plays, poems, speeches and reminiscences. But what's really important is its more than 140 pages long introduction, written by Richard Lancelyn Green. That introduction is one of the cornerstone works in Sherlockian literature, explaining in detail how Conan Doyle started writing about Holmes, and how the detective became a success. Much of what we know about this history comes from Lancelyn Green's research and this introduction.

It's impossible to say anything about ten years from now. I mean, ten years ago, the Sherlock Holmes world was basically the same as it had been since the 1990s, post-Granada. But then came the TV series Sherlock and changed absolutely everything. It also changed me and my Sherlockian interests, and gave me the incitement to write "From Holmes to Sherlock". Who knows what will come and change the world for me and others again? When it comes to traditional Sherlockiana, I think it will live on as long as there still are traditional Sherlockians. 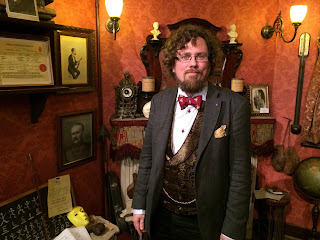