Now We Have the Sherlock Holmes Test [STUD]

This week, I was reading "The Late Mr. Sherlock Holmes" by Trevor Hall.  This one isn't as widely known as his first book, but just as delightful if not more so!  But I'm not here to write a book review.  Nope.  I'm here to talk about footnotes. 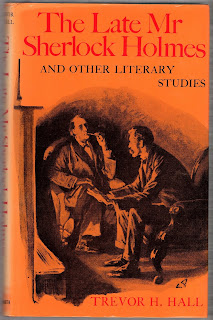 Footnotes, the earmark of Sherlockian research.  Hall's essays have plenty of them!  And I started playing a game with myself.  Every time a canonical quote was marked, I would try and see if I could tell which story it was from.  Now, I'm fairly adept at scion society quizzes, so I expected to do pretty well at this game.

It's one thing to recall information from one story, but from all sixty?  And some of these stories I haven't read in a few years?  It was bad.

So, to make myself feel better about my lack of quotational knowledge, I'm going to share quotes from just one of the essays in the book.  This is from an essay on Sherlock Holmes and books.  This wasn't one of the hardest ones in the book, but still more challenging than I had expected.  (The essay that quotes all of the times that Watson commented on an attractive woman?  Hoo boy...)

The answers will be at the end of the post.  How many can you cite correctly?  Keep track of your score and post it in the comments below.  Bragging rights for whomever gets the most correct! 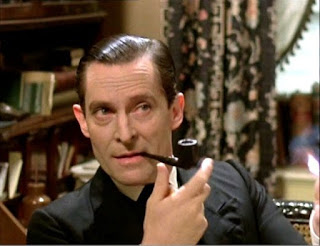 1. A small but select library, taken over, as I understand, from a former occupant.

2. We heard of you living the life of a hermit among your bees and your books in a small form upon the South Downs

3. [Holmes] Raised his eyes languidly from the old black-letter volume which he had opened.

4. [Holmes] Remained in our lodgings in Baker Street, buried among his old books.

5. No, I don't think I have anything rarer than a Crown Derby tea-set.

6. Ha!  And the flap has been gummed, if I am not very much in error, by a person who had been chewing tobacco.

7. They consisted of a couple of comfortable bedrooms and a single large airy sitting-room, cheerfully furnished, and illuminated by two broad windows.

8. His cigars in the coal-scuttle, his tobacco in the toe-end of a Persian slipper, and his unanswered correspondence transfixed by a jack-knife into the very centre of his wooden mantelpiece.

9. A row of formidable scrap-books and books of reference which many of our fellow-citizens would have been so glad to burn.

10. Holmes in one of his queer humours would sit in an arm-chair, with his hair-trigger and a hundred Boxer cartridges, and proceed to adorn the opposite wall with a patriotic V.R. done in bullet-pocks.

11. He had at least five small refuges in different parts of London in which he was able to change his personality.

12. The most perfect reasoning and observing machine that the world has seen.

13. That true cold reason which I place above all things.

14. With a nod he vanished into the bedroom, whence he emerged in five minutes tweed-suited and respectable, as of old.

15. With his collar turned up, his shiny seedy coat, his red cravat, and his worn boots, he was a perfect sample of the class.

16. He's following someone.  Yesterday he was out as a workman looking for a job.  Today he was an old woman.

17. A little later a rakish young workman with a goatee beard and a swagger lit his clay pipe at the lamp before descending into the street. "I'll be back some time, Watson', said he, and vanished into the night.

18. If instead o' standin' there so quiet you had just stepped up and given me that cross-hit of yours under the jaw, I'd ha' known you without question.

19. [Holmes] had a good practical knowledge of British law.

20. Phillpe de Croy, whoever he may have been.  On the fly-leaf, in very faded ink, is written 'Ex Libris Guliemi Whyte.'  I wonder who William Whyte was.  Some pragmatical seventeenth century lawyer, I suppose.

22. A little bookshop at the corner of Church Street.

23. It was not merely that Holmes changed his costume.  His expression, his manner, his very sould seemed to vary with every fresh part that he assumed.

24. How he had purchased his own Stradivarius, which was worth at least five hundred guineas, at a Jew broker's in Tottenham Court Road for fifty-five shillings.

25. A man should keep his little brain attic stocked with all the furniture that he is likely to use, and the rest he can put away in the lumber-room of his library, where he can get it if he wants it.

26. There is a great garret in my little house which is stuffed with books.  It was into this that I plunged a rummaged for an hour. 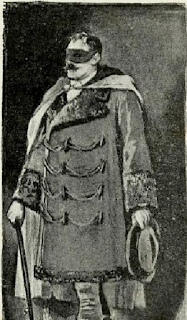