Jerry Margolin is the proud owner of the world's largest Sherlockian art collection.  He owns THOUSANDS of pieces ranging from original Pagets and Steeles to some you've never heard of.  If that were all he were known for, I would slap some pictures up here of his collection and we could all oooh and aaah over them.
But I got to meet Jerry and his lovely wife Judy in Minnesota last year, and was immediately treated like an old friend.  Sure, we talked Sherlockiana, but I found the Margolins to be so friendly and garrulous, that we were soon rambling on and on about baseball, school, our kids, tattoos, you name it.
There are living legends that you hear spoken of reverentially when you get into Sherlockiana, and Jerry Margolin is definitely on that list.  So when I first met the Margolins, I was expecting someone who knew he was a big deal and would be nice but brief with someone he didn't know, but what I found was a Sherlockian who has been in this hobby for a long time and still has the energy and love that can so often fade over time.  Jerry is extremely friendly and welcoming, and if you haven't met him yet, you are in for a treat with this week's interview. 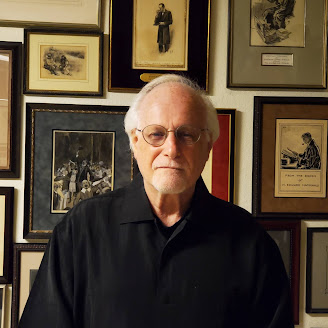 How do you define the word “Sherlockian”?
I would have said there is an easy answer to that question back when I started collecting Holmes books. I would have just said someone who reads all the stories over and over to digest every little detail. Over the years though, Sherlockians have diversified so much that there is no one way to describe that term. Describing myself, I am not a scholar, I know my general facts, but I do not get into the minutiae. I enjoy reading that information from others and I had all the books of chronology and detailed discussions, but I am a collector. There are so many other directions people can go such as film, books, and details within the stories. Basically, anyone with any type of deep interest in any part of Holmes and/or the stories can be called a Sherlockian.
How did you become a Sherlockian?
Well, the easy answer is the cliched answer people have heard over and over. My brother is four years older than me and he was always a reader, in fact he is now a best selling author. When I was 10 years old he gave me the Complete Sherlock Holmes and told me to start reading. I was hooked pretty quickly after reading some of the stories, especially The Hound, which at 10 years old was pretty scary. My association with Holmes really picked up on my honeymoon, we went to London and after landing, going to the hotel, the first thing we did was to walk to Baker Street. I also bought the first books for what was to become a massive Holmes book collection. So this was where my interest in Holmes and collecting collided. After that, a few  years later, I met my mentor in all things book collecting related, Norman Nolan, BSI. He basically taught me what I know about book collecting and he invited me to my first BSI dinner as his guest in 1974. This was the moment my interest in being a Sherlockian was solidified.
What is your favorite canonical story?
My favorite story has almost always been “Thor Bridge”. Besides the story itself, it contains several classic things we all know such as the mention of the tin dispatch box labeled “John H. Watson, MD” which consisted of manuscripts of as yet unpublished stories. A couple mentions are those of Mr. James Philimore who stepped back inside his house was never seen again. Also, there is Isadora Person and the remarkable worm unknown to science. Another classic in this story is Holmes’ thoughts on his fee, “My fees are upon a fixed scale, save when I remit them altogether”.
As to the story, I have always liked how Holmes figures out how Neil Gibson’s wife dies, clearing Grace Dunbar. His discovery of the gun on the string was uniquely a Holmes deduction. As an aside, my first original Frederic Dorr Steele added to my collection was of Holmes seated at a table speaking with Neil Gibson. 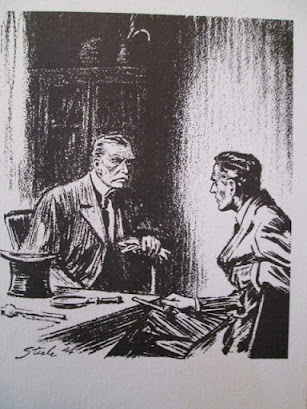 Who is a specific Sherlockian that you think others would find interesting?
Les Klinger is the person I would name as someone Sherlockians would find interesting. First, the volume of work he has put out, both Sherlockian and non-Sherlockian, is enormous. I have known Les for many years and I still can’t figure out how he has stretched the normal day to more than 24 hours. Of course, first and foremost would be his incredible new take on The Annotated Sherlock Holmes. If you have even a small amount of interest in Holmes, this is a must have on your shelf. He is also an interesting speaker on many topics. His other works on subjects such as Dracula, Frankenstein, Sandman, and so many others are worth researching. Les’s depth of knowledge on so many subjects would make him the perfect person for anyone to get to know better.
What subset of Sherlockiana really interests you?
In my earlier book collecting days when building my Holmes rare book collection, what really interested me were early works in dust jackets. In the early 1900’s dust jackets were considered a nuisance and thrown away which I think is a crime. Some were beautiful with incredible artwork. As any collector knows, a dust jacket on an early rare book can be 50% of the value of the book. One great example for Sherlockians is the first edition of The Adventures of Sherlock Holmes 1892. There is only one in existence in jacket and I have had the great pleasure of holding it in my hands. I find it terribly sad that these pieces of paper which sometimes added excitement to the moment just before you open the book to read the first page have been discarded.
What things do you like to research related to Sherlock Holmes?
Anyone who knows me or have heard about my art collection, would not be shocked to find out that my favorite subject to research is artwork in Sherlockiana. When I find a piece of art that interests me, not necessarily by a famous artist, it sets me on the trail to track down and get in touch with this person to try and arrange to buy the original artwork. Fortunately, I have been quite successful at this. It does not always work out, but as with my book collecting days, the hunt was everything, the excitement of finding the information needed to obtain the piece can be almost as exciting as finally hanging the piece on my wall. 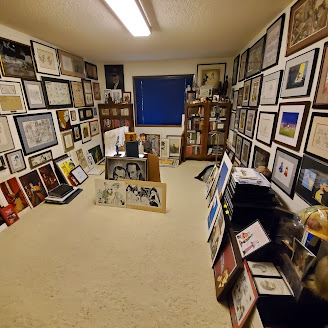 How did you become a Sherlockian art collector?
This is a pretty easy question to answer. I was born a collector, my mother was an antiques collector and dealer. I collected everything as a kid, comics, baseball cards, etc. As I began to collect Holmes rare books, I would from time to time come across Sherlock Holmes art that, at that time, was pretty inexpensive so I would buy it. As my book collection grew, I began to seek out a few more pieces of art. In those early days of the 70’s and 80’s comic artists just gave their art away. After it was used to print the comic or book, they had no further use for it. I started calling and writing (yes real letters) to these people and asking for their art. All they said to me was, what is your address and it arrived days later in the mail. I was able to acquire quite a bit of amazing artwork by some incredibly well-known artists.
After I sold my book collection, I found that after removing all the bookcases, I had a lot of wall space to fill and the art collection exploded all over my home to the tune of some 4,000 pieces both on the walls and in portfolio books. Sadly, later into the 90’s, artists discovered that their work was valuable and my gravy train of free art was over. Needless to say, having to pay for the art now has not stopped me, sometimes much to my wife’s dismay.
What is the most interesting or obscure piece in your collection?
This particular question is not an easy one since I have so many unique items in the art collection. I would say there are four pieces in particular that I can mention. First and foremost would be my original Sidney Paget from “The Resident Patient”. I have owned since the 80’s when I acquired it. To this day, every time I see it, it still hits me that I actually own one of only about 30 originals in existence. 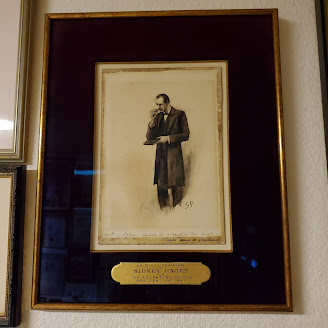 The next would be a drawing from 1896 by artist Peter Newell which he drew for John Kendrick Bangs “Pursuit of the Houseboat”. It is one of only two drawings in the book that shows Holmes. It is signed and dated by Newell in 1896. The book was published in 1897. 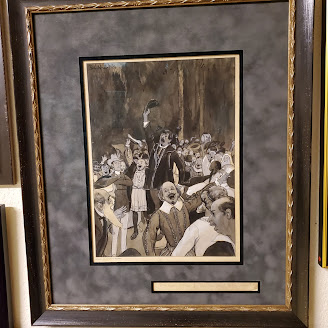 The next would be, though not Sherlockian, a drawing by Sir Arthur’s father Charles Doyle which shows in it the fairies which was so appealing to Sir Arthur. 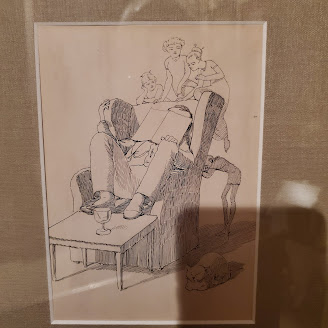 Along with this, also not Sherlockian, is a doodle by Sir Arthur Conan Doyle which is signed with his initials on the back. Both of these last two hang side by side on the wall. 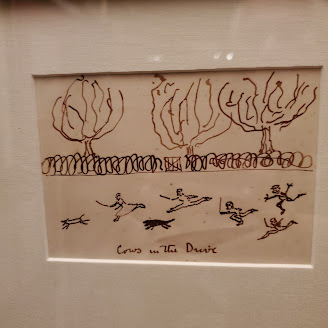 What book would you recommend to other Sherlockians?
The books I would recommend are a bit tough to find, but well worth the hunt. They are a set of history books about the Baker Street Irregulars , not the street urchins from the stories, but the organization. The author of these books is Jon Lellenberg and are some of the best Sherlockian reading I have done in my years as a person interested in Holmes. All the information found in these books are fascinating. Jon did a great job laying out the history of the BSI from the 30’s to the 60’s. If you know someone who has them that might be borrowed or if you can seek them out on book selling platforms, it is so worth the hunt. 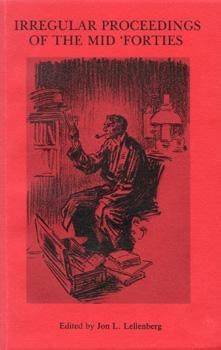 Where do you see Sherlockiana in 5 or 10 years from now?
I am sincerely hoping that through the recent spate of films and tv shows using Holmes in different characterizations from the BBC series, Elementary, to Miss Sherlock,  will lead younger people back to reading the original stories. If that can happen then interest in Sherlock will continue.
As others have stated before me, the upside to this pandemic is the advent of the Zoom meetings where people from all walks can join in and speak to and hear from older long time Sherlockians and mix their ideas and thoughts across many countries. I have met many new people I would not have ever had the chance to meet without these online get togethers.
I believe there is great hope for interest in Holmes to continue far into the future. 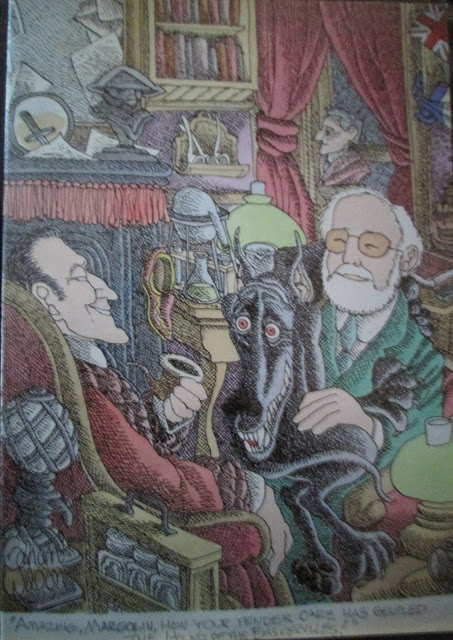