Man, I don't know where to begin with the introduction for this week's Interesting Interview.  Joe Eckrich has been a Sherlockian mentor to me for years.  Some of my fondest Sherlockian memories are the car rides he and I have taken to events or to visit with folks.  This is a guy who is a Sherlockian down to his bones.  He collects books, autographs, friends, and knowledge like you wouldn't believe.

But first and foremost, Joe is a great guy.  He founded my home scion, The Parallel Case of St. Louis, and ran it for decades.  He's been on the planning committee for our first Holmes in the Heartland, the one that had to be cancelled, as well as lots of the Holmes Under the Arch conferences long ago.  Joe travels to as many events and meetings as he can and is always up for meeting new Sherlockians.  As you'll see below, Joe's passion is the friendships he's made along the way.  If you talk to anyone who is involved in the wider Sherlockian world, they will either know Joe Eckrich, or have heard of him.  And I will bet money that they all have good things to say. 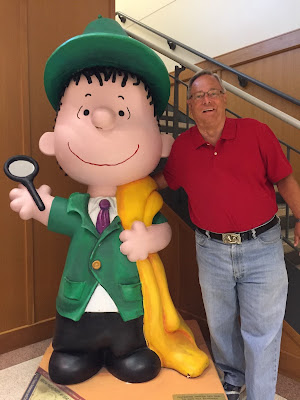 I loosely define it as anyone interested in Sherlock Holmes, in whatever media.  I believe in a “big tent” theory in which there is room for everyone, regardless of their interest, even if it doesn’t match mine.  In a narrower sense, I suppose, I would define it as anyone involved in organized Sherlockiana in any way.  I have been a member of various Sherlockian societies for over 45 years and have spent some of my happiest times at various Sherlockian events.  I would hope anyone truly interested in Sherlock Holmes could eventually find their way to such a group.  And, of course, however they might have arrived at Sherlock Holmes, I would hope they would appreciate the written word, the actual stories themselves.

Like most things I suppose it was a combination of things.  I began reading and enjoying detective fiction at an early age and, along with my mother, watched a lot of old movies on television (The Early Show, The Late Show and The Late, Late show) many of them mysteries, including the Rathbone Sherlock Holmes films, which I very much enjoyed.  Rathbone is still my favorite Holmes.  Anyway around seventh grade I would routinely ride my bicycle to the local public library and take out books, usually mysteries.  They had the one volume Complete and I would periodically check it out and read as many stories as I could before I had to return it. 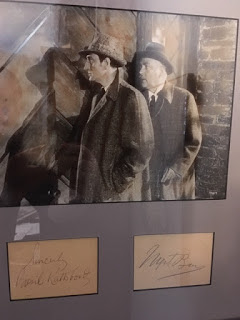 Flash forward quite a number of years and Nicholas Meyer published The Seven-Per-Cent Solution and the floodgates opened.  Books by Michael Harrison and Michael Hardwick and others were being published.  I would visit local bookshops on my lunch hour and pick up whatever I could find, including a remaindered copy of Baring-Gould’s Sherlock Holmes of Baker Street.  While I am not a big fan of the book, it was in the appendices that I found a treasure trove of books and articles on Sherlock Holmes.  I was always a collector and this opened my eyes to a whole new area of collecting.

About this same time the local Sherlockian group, The Noble Bachelors, participated in an event at Southern Illinois University across the river and the local television station ran a piece on it.  My father, who was an engineer at the station, told me about it and from there I contacted Philip Shreffler, the head of The Noble Bachelors, who invited me to a meeting.  The rest, as they say, is history.

While not my favorite story by a long shot I do have a fondness for “The Stockbroker’s Clerk”, since that is my investiture in the Baker Street Irregulars.  When Tom Stix conferred that on me he mentioned it was because I was a government employee.

My favorite story is "The Hound of the Baskervilles."  I also like “The Sign of the Four”.  It has a lot to recommend it, including a mention of St. Louis, which is where the name of the society I founded, The Parallel Case of St. Louis, comes from.  And I am probably in a minority when I say I enjoy "The Valley of Fear." 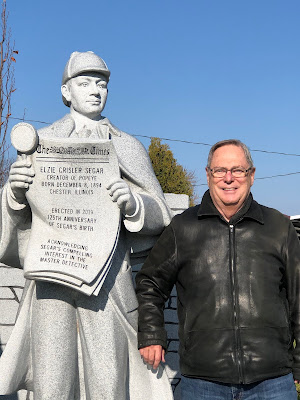 I greatly admire Steve Doyle.  I simply don’t know how he does everything he does.  Just in the Sherlockian world he is one half of Wessex Press, publisher of the Baker Street Journal, head of The Illustrious Clients and broadcaster and host of “The Fortnightly Dispatch”, as well as a collector and friend to many in the hobby.

Two Sherlockians who are no longer with us were certainly worth knowing, Gordon Speck and Paul Herbert.  Gordon and I travelled to many Sherlockian events in the US and Canada and wherever Gordon went he made friends.  Both are sorely missed.

I love attending Sherlockian events whenever and wherever possible, not just for the programs but especially for the people.  Getting together with friends and making new friends within the hobby is what makes everything worthwhile.  With Covid-19 it has been difficult but, thanks to zoom, I have been able to actually attend meetings I might not otherwise have an opportunity to get to and I at least get to see friends.  I can’t wait to get back to seeing people in person but I will miss attending some far-flung meetings.

I spend much of my time collecting Sherlockiana, particularly books.  I primarily collect the “writings on the writings”.  I don’t much care for most of the pastiches out there, although I do have a select few.  I also collect Sherlockian autographs of actors and actresses who have appeared in Sherlockian films, TV and stage productions.  I also spend quite a bit of time reading and rereading the books I have. 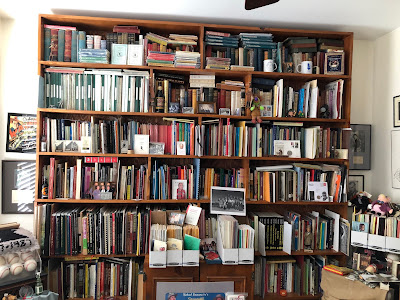 Well, most people who know me know I don’t write papers. That’s not to say I haven’t.  I have actually done a number of them, just not for quite a while.  I also was co-editor of our society’s newsletter for over 10 years and for several years wrote a monthly column on all things Sherlockian for “Plugs & Dottles”, the newsletter for The Hansoms of John Clayton.  While I enjoyed both of those activities, writing is not my forte.  I truly wish it were.

Any research I do is for my own information and enjoyment.  I love to read such books as The London of Sherlock Holmes and In the Footsteps of Sherlock Holmes by Michael Harrison which delve into the Victorian world that Holmes was a part of.  I also enjoy reading books and articles on Sherlockian media productions and the people involved in them.  The latest issue of The Baker Street Journal had just such an article on H. A. Saintsbury by Paul Singleton which was excellent.  I love anything about the history of the BSI and early Sherlockians.  As a collector of early Sherlockian books it is always interesting to research the background of the books and their authors. 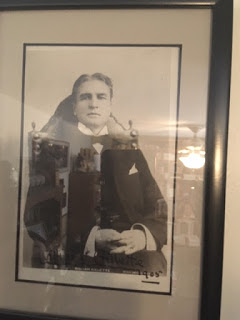 How did you become a Sherlockian actor autograph collector and what are some of your favorites?

I have two sons, one of whom is actually a Sherlockian, and when they were young I would take them to baseball card shows to pursue their hobby.  These shows would usually bring in former players, including Hall of Famers, to sign autographs.  After a while we started obtaining the autographs at these shows.  I wasn’t that interested in the cards, although as a youngster I had been, but I enjoyed collecting signed baseballs and photographs, particularly of players from my youth.  From there we began collecting autographs of various actors and actresses that we liked.  It was a fairly short step to collecting Sherlockian autographs.  Since I have always been interested in old films, classics and otherwise, I am naturally very interested in the various film presentations of Sherlock Holmes and the actors in them. 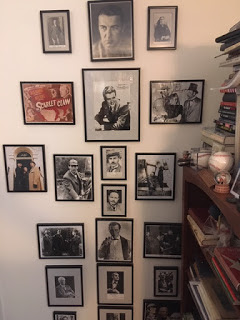 Most of us love buying books, but you can also be found at many conferences selling books at a dealer’s table.  How has collecting and selling old books shaped your views on our hobby?

I didn’t start out to sell books.  Early on a local BSI and collector was moving from a large house to an apartment and offered his collection for sale, wanting to keep it local if possible.  It was a huge investment for me at the time but I took the plunge (never regretted).  I had been collecting for a while so there were duplicates and, in order to help pay for the collection, I offered the duplicates for sale, sending out lists.  Then a few years later, when I was preparing to get married, I sold off some of my collection the same way in order to clear some debts.  Fortunately I have been able to reclaim almost all of what I sold.  As with most collectors I would periodically upgrade the condition of a book or just buy something interesting if the price was right, even if I had a copy.  Over time I had a supply of books to sell and the logical thing was to set up at the various conferences within driving distance, which I did.

I try to price my books fairly for other Sherlockians, although values are going up.  While the selling helps me afford to attend these and other conferences (I am a retired civil servant), I often wish I were just there to enjoy the conference and mingle with the attendees and I do attend meetings and conferences without selling.

I am not sure that buying and selling has shaped my views on the hobby other than the observation that there are not as many collectors as there once was.  Also, I find that many newer Sherlockians are unaware of many who went before them and the wonderful books that they provided to the hobby.  While selling I try to educate as well. 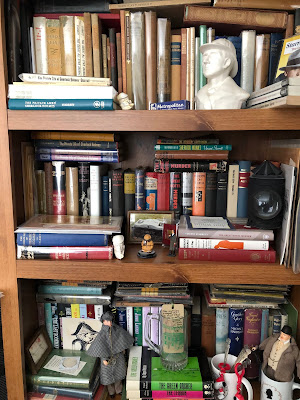 I think a must for anyone, collector or not, is Klinger’s nine volume The Sherlock Holmes Reference Library if you can get it, otherwise his three volume set.  Also, Sherlock Holmes for Dummies by Steve Doyle.

As for older books, I recommend Starrett’s The Private Life of Sherlock Holmes, which is available in inexpensive editions.  I am very partial to A Sherlock Holmes Commentary by D. Martin Dakin.  It has interesting commentary on each story plus a chronological table.  I would recommend anything by Michael Harrison as well as Sherlock Holmes Detected by Ian McQueen and Seventeen Steps to 221b, a British anthology edited by James Edward Holroyd.

As you can see I am unable to recommend just one book.

Where do you see Sherlockiana in 5 to 10 years from now?

I think the future is very bright.  Not so long ago many, including myself, were lamenting the lack of young people coming into the hobby.  I am heartened by the many changes taking place which included more and very talented young people joining the ranks.  Also, a large number of older Sherlockians are becoming welcoming to these new members and open to new ways of viewing Sherlockiana.  I also believe that along with the accepting of new there is still a desire among most to keep many of the worthwhile traditions of the past.