When I think of this week's Interesting Interview subject, Peggy Perdue, the first word that comes to mind is "delightful."  Many people know her as the curator of the Arthur Conan Doyle Collection at the Toronto Reference Library, which is a position she held for thirteen years.  And if you're anything like me, you are very jealous of her for that time!  Peggy has recently been promoted and serves in an advisory role to the new curator.

In Peggy's own words, she says she's mostly a hobbyist now.  And what a hobbyist this lady is!  A quick Google search for Peggy Perdue will show you the breadth of her Sherlockian knowledge.  Talks on pop culture, Victorian phobias, advertising, and more will keep you occupied for a while.  And I just learned that Peggy has her own Sherlockian blog, mentioned below.  Anyone who can combine baking and the Canon to create STUDmuffins, is more than any old "hobbyist"!  So enjoy another wonderful Canadian in this week's interview, Peggy Perdue! 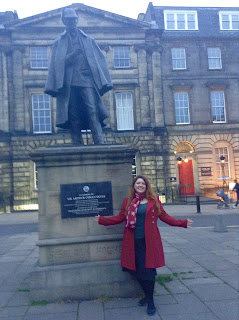 How do you define the word “Sherlockian”?
I'd say a Sherlockian is someone who has a strong need to share their appreciation for Sherlock Holmes with other people. It doesn't matter whether the person is by nature an introvert or an extrovert, clubbable or unclubbable, scholarly or inexperienced; such a person will not consider their time with Holmes complete until they have engaged with others about it in some form. Anyone can be a devoted fan all by themselves in an armchair, but I think it takes other people to make someone a Sherlockian. 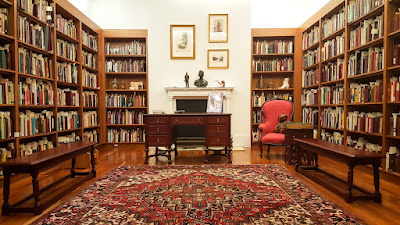 How did you become a Sherlockian?
I have always enjoyed Victorian literature, and I distinctly remember my first encounter with Sherlock Holmes in the late 1980s. When I joined Toronto Public Library many years later, the idea of actually getting to work with the Arthur Conan Doyle Collection seemed an unattainable pipe dream--or a three-pipe dream, if you like. However, when the position as curator became available in 2005, I managed to get the job. When I started, I just thought I was going to be working with an interesting rare book collection--I'd never even heard of a "Sherlockian." It wasn't long before I found out all about it! Now many of my closest friends are Sherlockians and I wouldn't have it any other way.
What is your profession and does that affect how you enjoy being a Sherlockian?
I'm a rare book librarian and, as mentioned above, for 13 years I had the great privilege of being curator of Toronto Public Library's Arthur Conan Doyle Collection. I now have a more senior role in the department but there are still plenty of opportunities to do things with the collection in cooperation with our curator Jessie Amaolo. That being said, I actually love being a "civilian" now. Sherlock Holmes and Arthur Conan Doyle aren't a full-time job anymore, and I can truly say "I play the game for the game's own sake."
What is your favorite canonical story?
Speaking as an incurable romantic and a Watsonian, it has to be "The Sign of Four." Boy meets girl, girl meets boy, bottom of the river meets treasure, detective solves case--what more can one ask for? 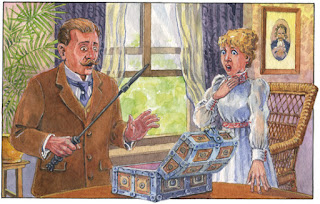 Who is a specific Sherlockian that you think others would find interesting?
Where to start? You have covered so many truly interesting people in these interviews, and there are so many more left to be interviewed. I think I'll abandon any idea of mentioning one or two particular friends and omitting the rest. Instead, since I've mentioned the ACD Collection a couple of times already, I'm going to recommend the current curator Jessie Amaolo. She's doing a great job with the collection, and she isn't yet very well known in the larger Sherlockian world. 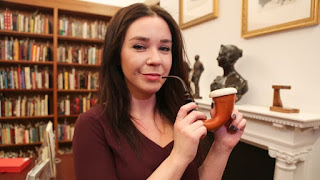 What subset of Sherlockiana really interests you?
Sherlockian travel is a thing I'd like to get back to soon. I also love the artsy-craftsy side of the hobby. Whatever one's creative outlet, one needs inspiration in order to face a blank page or a blank canvas, and like many, I find Sherlock Holmes to be the perfect muse. It's not an exaggeration to say that this has gotten me through the pandemic, whether it's creating recipes for my baking blog sherlockforpudding.blogspot.com, sketching a portrait of Moriarty in tea leaves, or working on my current project, crocheting an Arthur Conan Doily. 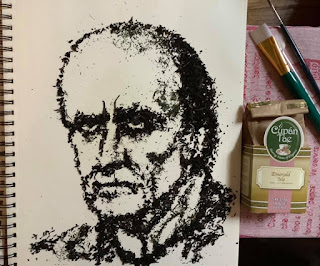 So often newer Sherlockians will stick with the stories and forego delving into the life of Arthur Conan Doyle.  As someone who has written and given talks about different facets of the man's life, what argument would you make to get folks to investigate him more?
To paraphrase Sir Arthur himself, Conan Doyle's life was often stranger than anything he could invent, and just sharing some stories about him is the best way to get people interested. I think it's fair to say that there's been an increased interest in Conan Doyle in recent years among both new and longtime Sherlockians, with far fewer people now fully entrenched in the "literary agent" angle. The last time someone got really angry at me for mentioning his authorship was 2009. I almost miss that old fighting spirit.
This year is the tenth anniversary of your Beacon Award!  Looking back on such a big project, what are some highlights from implementing it?
The project was to do outreach presentations to children as a way to have the Arthur Conan Doyle Collection participate in the library's Summer Reading Club, which featured a detective fiction theme that year. I once spent a couple of happy years working as a children's librarian, so the biggest highlight for me was just the opportunity to work with small people again. Even very young children can understand the basic concept of what a detective is. We had great fun playing with disguises, solving riddles and codes and practicing careful observation.
What book would you recommend to other Sherlockians?
Too many to choose from again...how about A Taste For Honey by Gerald Heard? It's often been out of print since its first publication in 1941, but Otto Penzler published an edition in 2019, so it shouldn't be too difficult to get hold of now. The book is an interesting blip on the timeline of Sherlockian activity; it belongs neither to the early turn of the century parodies nor the late 20th/early 21st century pastiche boom. To read it is to step away from the familiar, modern world of Sherlockiana and occupy a space where only the author and the reader agree that it would be a good idea to pop Conan Doyle's famous detective into a new story. 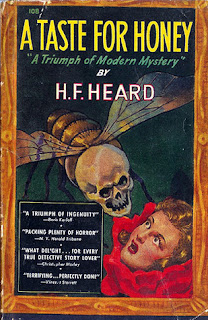 Where do you see Sherlockiana in 5 or 10 years from now?
Living in the mountains at high altitude. No, sorry I'm just kidding--that's a quote from Groundhog Day. I'm deflecting because honestly, I don't know. The only thing I'm sure of is that it will continue. Holmes and Watson have stood the test of time too long now to fade quietly away.
Posted by Rob Nunn at 8:32 PM