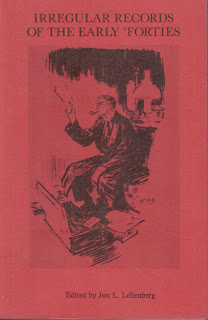 I've often heard that the BSI History Series from the 90s was a great set, and I finally got to start reading one of them, Irregular Records of the Early 'Forties.  This is a book that's going to take me a while to read through because every page is filled with the interesting BSI's of yesteryear and takes me down rabbit holes of discovery (I just ordered a biography of Christopher Morley that I never knew existed right before I started this post!). 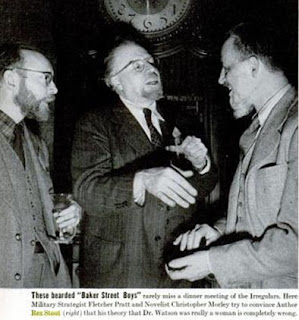 This volume kicks off with 1941, the year that Rex Stout delivered his infamous 'Watson was a Woman' talk.  For those of us interested in Sherlockian history, this story has been around and around.  But the minutiae around the talk are even more interesting:

*Stout had been invited to speak at the dinner, and Edgar Smith's hope was that he would speak to a recent article from the Saturday Evening Post that disparaged the Sherlock Holmes stories.  Stout took a different path for his talk.

*The attendance at that dinner included 26 people and cost five dollars a head.  Quite different from current dinners that have to cap attendance at 300 and have a significantly higher price tag. 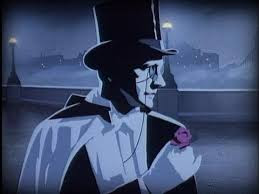 Julian Wolff responded at the following year's BSI dinner (again a $5 cover) with "That Was No Lady - A Reply to Mr. Stout With Which Are Included Some Observations Upon the Nature of Dr. Watson's Wound."  But Stout was not in attendance that year (41 others were though), so Edgar Smith sent him a letter addressed to "Rex (Iconoclast) Stout" where he informed the author of the rebuttal fired at him and included the text.  Most of us have heard the story of that text which ended with the coded "Nuts to Rex Stout," but many have not seen the shots that Smith fired at Stout in his letter:

"My dear Sir or Madam:

There are those, I know, who would urge that I address you not as Rex, but outright as Regina, in vengeance for the aspersions you have cast upon the masculinity of Sherlock's revered helpmeet.  But I refrain." 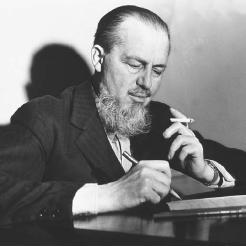 All of this was in good fun, of course.  Stout continued to attend BSI functions and emcee many of them for the coming years.  He was also awarded the first Two Shilling Award by the BSI in 1962.  And once The Baker Street Journal started publication, Edgar Smith even reached out to Stout asking him to contribute a piece to the journal, maybe what Nero Wolfe's viewpoint was toward Sherlock Holmes.  That's an article I would love to read!

So many things from history get boiled down to a few talking points, and Sherlockiana is no different.  But I'm finding that looking beyond those oft-repeated highlights are a very rewarding endeavor.  There's a lot of fun stuff out there! 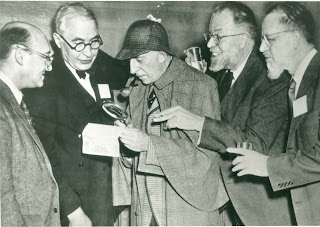