Bring Me The Books [BLUE]

I am beyond excited to announce two new books! 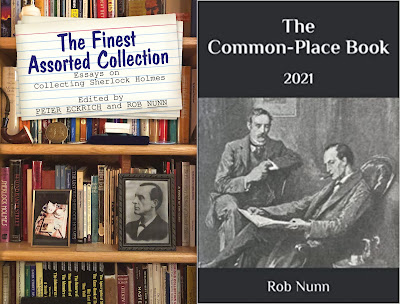 While I've talked about these in bits and pieces, today is my first official public announcement of The Finest Assorted Collection: Essays on Collecting Sherlock Holmes and The Common Place Book: 2021.  I figured it would make sense to announce them both on the same day, so let's start announcing! 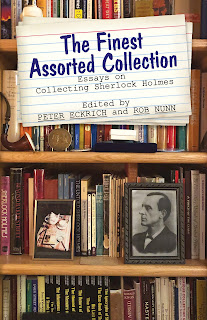 The Finest Assorted Collection is an anthology that I co-edited with Peter Eckrich.  It is a look at the collecting habit that we have in Sherlockiana.  Twenty-seven Sherlockians have contributed essays to this anthology about their specific Sherlockian collections.  From the hyper-specific to the all-encompassing, there are plenty of essays in here that will have you feel like a kindred spirit, make your mouth water, and make your spouse realize your collection isn't so bad after all!
This anthology was such a delight to work on with Peter.  We got some great folks to work with and editing this project was a real highlight of my Sherlockian career.  So who is in this book?  How about I just show you the Table of Contents:
Introduction by Peter Eckrich & Rob Nunn
Colligo Ergo Sum by Barbara Rusch
A Three-Dimensional Collection by Denny Dobry
Stranded in The Strand: An 80 Step Program by Charles Prepolec
Hard and Charm Collecting: A Case from Italy by Gabriele Mazzoni
Collecting Books I Cannot Read by Don Hobbs
The Many Evolutions of a Collector by Howard Ostrom
From the Screen to My Library: Collecting Shelockian Cinema by Steven Doyle
The Signature is Very Suggestive by Joe Eckrich
Collecting for the Brain Attic by Ashley Polasek
The Intangible Things by Monica Schmidt
A Three Pipe Problem by Al Shaw
Mr. Holmes, They Were the Footprints of a Gigantic Hound! by Don Pollock
That’s Old News by Mattias Boström
A Case of Ancient Coins by Greg Ruby
“I trust that you don’t consider your collection closed.” – The Never-ending Quest for Traditional Pastiches by David Marcum
Confessions of a Chronology Collector by Mike McSwiggin
The Game’s Adult by Leslie Klinger
A Bohemian Collection by Lee Vann
Collecting the Art of Holmes by Amanda Downs
Art in the Blood by Jerry Margolin
Happy Mother’s Day, Sherlock! by Sonia Fetherston
For the Common Good: Libraries Collecting Sherlockiana by Tim Johnson
Delighted as a Child by Beth Gallego
Detective Pikachu, I Choose You!: Collecting Sherlockian Toys by Robert Perret
All the Selectivity of a Vacuum Cleaner by Paul Thomas Miller
The Collector’s Collector by Christian Monggaard
Living with Johnny Appleseed: Hijacked Planes, Couch Surfing, and the Search for the Holy Grail by Barbara Shaw
You can see why this project was such a fun one to work on!  Many of these authors have been Interesting Interviews over the past few years, and you can bet the ones that haven't been interviewed yet will be soon!
The Finest Assorted Collection: Essays on Collecting Sherlock Holmes will be available from Wessex Press on January 15. 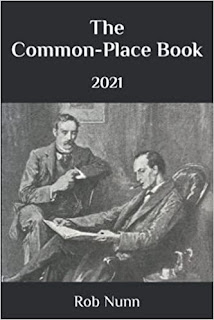 But if you don't want to wait until next month, The Common-Place Book is available now!  This is a collection of 13 pieces of Sherlockian writings I've done over the years with twelve of the chapters covering canonical tales.  Some have appeared on this blog, others in journals, and some were presented at Sherlockian meetings.
The idea behind this book is that so many of us have our writings scattered all over the place, it might be nice to have things collected under one cover.  This is a slim volume at a slim price.  My hope is to put one of these out each year.  Lord knows there's plenty of writing out there to collect!
And for those of you who want a peek inside before pulling the trigger, here is the Table of Contents for this book:
Introduction
My First Night Among the Sherlockians
A Lasting Image of Baker Street
And Now as to the Villains
A Pupil for the Scientific Methods
Each is Suggestive
Then I Will Go Back to Him with Some Faked Papers
A Very Pretty Hash You Have Made of It
Old Friends Overstatements
The Starting Point of so Many Remarkable Adventures
A Study in Steadfast
There is Moriarty Himself
Somewhat Incoherent in Consequence
A Toast to Holmes and Watson
Two more books to add to our already stuffed bookshelves?  Yup.  Add them to your collection and enjoy!
Posted by Rob Nunn at 6:30 PM