I Reviewed the Whole Extraordinary Sequence of Events

Friday night, my wife and I attended a performance of Baskerville put on by Insight Theatre Company in St. Louis.  As I mentioned last week, I wasn't sure what to expect; I'm not a big theater person and have never been to a Sherlockian play before.  That being said, my review is ready:

A little background before I get into this specific performance.  Baskerville was written by Ken Ludwig in 2015 and tells "The Hound of the Baskervilles" in a way that is true to the canon while adding in plenty of humorous bits.  Now, imagine HOUN and how many characters are in it.  Baskerville is put on by just five actors.  And, to me, this is what really impresses. 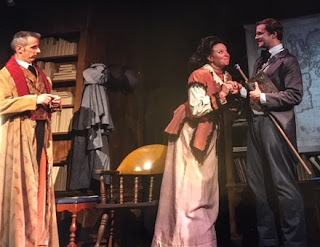 Insight Theatre's production is no different.  John O'Hagan plays Holmes alongside Kent Coffel as Watson.  Elliot Auch and Ed Reggi are billed as Actors 1 and 2 respectively, while Gwen Wotawa is listed as Actress 1.

As I watched the performance Friday night, I was struck at how similar I found O'Hagan's performance to Basil in "The Great Mouse Detective."  In a madcap story, he was the solid deductive genius, but you could sense his own energy right under the surface.  In a Q & A session with the audience after Sunday's performance, O'Hagan told the crowd that he modeled his Holmes after Basil Rathbone, and since Basil of Baker Street was modeled after the same actor, I'd say his version of The Great Detective hit home. 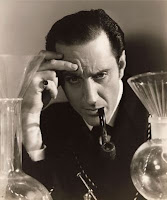 Although Kent Coffel has second billing as Dr. Watson, anyone that's familiar with HOUN knows that Watson plays just as large, if not larger, of a role than Holmes in this story.  Holmes is absent for much of the tale while Watson is off on the moor.  Coffel's Watson is the epitome of a stalwart companion in this performance and you can see why Holmes trusts him so and the audience feels that Henry Baskerville is much safer whenever Watson is around.

Director Maggie Ryan explained to the audience in Sunday's talk back session that Holmes and Watson were written to be the two steady roles in this comedy while the other three actors got to get all of the laughs.  An astute audience member (who may or may not have been Brad Keefauver) noted that it was a wise choice to keep the characters true to their original form, otherwise anyone familiar with the original stories would have a hard time with Holmes and Watson as comedic characters. 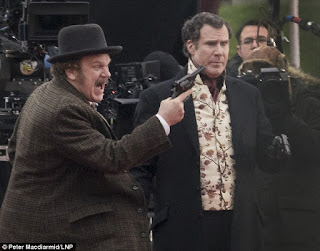 Elliot Auch gets two pretty substantial roles in this performance: Dr. Mortimer and Stapleton.  And even though his slot in the performance calls for 14 different characters (seriously!  14!), his version of Mr. Barrymore was my favorite.  Dr. Moritmer is a pretty straight forward character, but what he gets to do with Stapleton and Barrymore are entertaining takes on what could easily be cardboard cutout characters.  Stapleton does a lot of flouncing while Barrymore does a lot of limping.

Although it's listed as the Actor 2 role, Ed Reggi's performance should have been labeled "Henry Baskerville and some others."  Reggi spends the majority of his time as the Texas heir of Baskerville manor, and gives the role just enough Texas twang to make it funny without it being a parody of a loud American.  Reggi also gets to play a foul-mouthed Lestrade, and how he is able to pull off Sir Henry and Lestrade in the same climactic scene is one of the many highlights of the show. 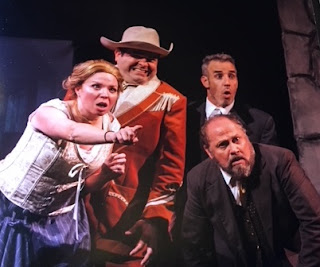 I purposely saved Gwen Wotawa's performance for last.  Because it's the best.  My wife and I saw the show Friday night and talked about her role the entire way home.  I got to see Baskerville a second time on Sunday and was just as impressed.  Since Baskerville is such a popular play, I'm assuming the Actress 1 role is just as demanding in all other performances, and if so, the lady that takes it on has to be extremely talented.  Wotawa takes on at least 20 roles by my guess.  All of them have different dresses, wigs, accents, and sometimes genders.  The fact that one woman can differentiate so easily between Mrs. Hudson, Beryl Stapleton, Laura Lyons, Cartwright of the Baker Street Irregulars, and a score of others is no small feat!  But if you get to see this play, Wotawa's performance as Mrs. Stapleton is a true delight just for her reaction to Holmes asking if Charles Baskerville had a girlfriend.

I could go on and on about how much I loved this performance, but not today.  I was lucky enough to get to see it a second time Sunday afternoon because I am selling copies of The Criminal Mastermind of Baker Street in the lobby before and after the Sunday matinees.  Somehow, I also agreed to be part of the Sunday talk back sessions with the actors.  I had a few minutes to give a synopsis of my book to the crowd and answer one or two questions before the actors came back out on stage, and after that, I spent more time asking them questions than I did talking about my own book (Sometimes curiosity outweighs capitalism and stage fright). 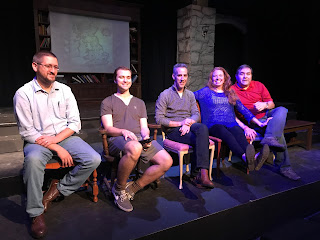 I'm lucky enough to get to spend the next two Sundays with Insight Theatre and their take on the most popular Sherlock Holmes story.  Even though I already have two viewings under my belt, I'm looking forward to more.  Who knows, I may just end up a theater fan after all.
Posted by Rob Nunn at 5:20 AM