Listen to This, Mr. Holmes!

There is a subset of the Sherlockian that I feel doesn't get enough attention: podcasts. 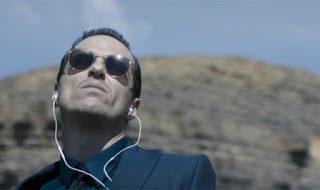 Now, before you say, "Nah, not for me."  Give me a second.  We are spoiled in our hobby as having some very good and very different podcasts out there.  I love the podcast forum, listen to a lot of them and I really feel like there is a show out there for each of us from the fans of traditional scion meetings to people who swoon over Cumberbatch's cheekbones and everyone in between.

Let's take a little stroll through Itunes, shall we? 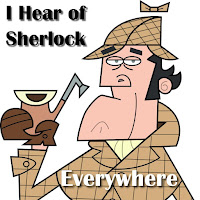 The granddaddy of them all, and the one that should be mentioned first, is I Hear of Sherlock Everywhere.  Put out by Scott Monty and Burt Wolder, IHOSE has 130 episodes under the belt dating back for years.  IHOSE is now on a bi-weekly schedule, and is THE podcast for the traditional Sherlockian world.  In fact, their playlist page gives you an idea of just how broad the show's focus us.  From books to  BSI societies to holidays to a primer for the uninitiated, I Hear of Sherlock has probably covered a subset of Sherlockiana that you're interested in.  No matter what I may be listening to on the 15th and 30th of the month when a new episode drops, that gets pushed to the side for my dose of IHOSE.  I recommend that every Sherlockian out there subscribe to this show just to be aware of the wider world of Sherlockiana out there. 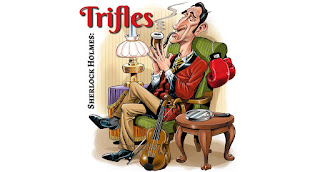 In fact, IHOSE had so many topics to cover, they started a second podcast, Trifles.  Trifles, as the title would imply, focuses on the trifles of the Sherlockian stories.  These are much shorter episodes, about 15 minutes each, and focus on a very narrow subject.  Episodes of Trifles will be more or less interesting depending on the topic.  Watson's marriages may be highly interesting to you, but maybe not the role of mothers or fathers in the stories.  No worries, because the next week will be a whole new topic!  If you are someone who loves to go down a rabbit hole on a specific topic, Trifles is right up your alley. 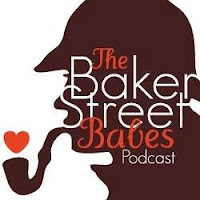 The history of Sherlockian podcasting can't be told without talking about The Baker Street Babes.  Started by Kristina Manente, the Babes have grown since the early days in 2011.  The cast is made up entirely of young women, but if you brush them off as silly fangirls, they will quickly prove you wrong.  BSB includes best-selling authors, world travelers, college professors, and plenty of others who know more about Sherlock Holmes than most of us.  The show has a heavy BBC Sherlock focus, but that's not their only focus.  Episodes have included interviews with Sherlockian authors, playwrights and radio personalities.  They just announced their second book, Femme Friday.  Although the output of shows has slowed down in recent months, anyone who enjoys BBC Sherlock and is interested in branching out to know more about the source material would do well to check out this high energy podcast. 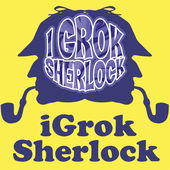 I Grok Sherlock is a fairly new podcast put out by Mike Ranieri and Geordie Telfer of the Bootmakers of Toronto.  Each month, Mike and Geordie take listeners through one of Doyle's Holmes stories in order of publication.  But this podcast is far from your typical book report.  The hosts' irreverent sense of humor and pop culture knowledge permeates the shows from start to finish.  Although each episode is dedicated to a specific Doyle story, Mike and Geordie spend a large part of each episode (and sometimes a whole episode on its own) going over the month's story's representations in popular media.  Their background in theater bring a new insight to discussions of Peter Cushing, Benedict Cumberbatch, Basil Rathbone, Jeremy Brett, and the many, many, many other actors who have portrayed the Great Detective over the years.  If you are interested in Holmes and his media incarnations, this is the show for you.

For fans of BBC's Sherlock and all of its fandom, there is The Three Patch Podcast.  This is a big one.  I mean big in scope of time.  Episodes can run up to three hours in length!  But it's not just hours of the same people talking.  Oh no.  It has recurring segments, reviews, interviews and much more, all with different hosts.  Three Patch is put together by a team of people who all have a serious love of the BBC show and its fandom.  And this fandom has worlds most of us traditional Sherlockians know little about.  If you love this fandom, you probably already know about Three Patch, but if you are curious about the online world of Johnlocking and fan fiction, this is your gateway. 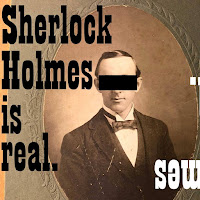 And then comes the newest of the Sherlockian podcasts, Sherlock Holmes is Real.  This is actually what got me thinking about podcasts this week.  I was interviewed for Sherlock Holmes is Real last weekend and wasn't totally clear on what it was.  Toni Sutherland said she was interested in talking to me about The Criminal Mastermind of Baker Street, and there's no such thing as bad publicity!  It was a pleasant interview, but she latched onto an offhand comment I made about conspiracies which struck me odd at the time.  When I heard the episode, I completely understood.  Apparently, there are some Sherlockians out there who think Sherlock Holmes was a real person, but not in The Great Game kind of way.  They think he truly existed, but there is a conspiracy afoot to turn him into a fictional character.  Alan King is at the forefront of this conspiracy theory, and to tell you the truth, I'm not sure what I think about this idea.  But I can tell you, I'm interested to see where it goes. 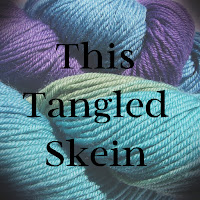 I would be remiss if I didn't mention, This Tangled Skein, a short lived, but fantastic podcast put out by Beth Gallego.  It's billed as a podcast about yarn, tea, and Sherlock Holmes (not necessarily in that order).  I'm not a knitter, but Beth's take on the Sherlockian topics of each episode were always a delight to listen to.  She seemed to take the traditionalist and new wave view on many topics, which isn't always easy to do.  Although it's been a year since the last episode, I still have hopes...

See? Told you!  They are all Sherlock Holmes based, but these podcasts are all their own entities.  For those of us who love podcasts and Sherlock Holmes, there's plenty to keep us busy.  Even if you're not a podcast listener, I would urge you to find one and give it a try.  We can but try. 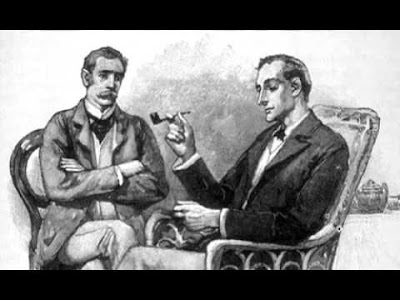