The Whole Thing Had Been Fixed Up for Theatrical Effect

The play's the thing!

Okay, that's not a Sherlockian quote, but it sums up my current Sherlockian thoughts.  Because this Friday, I'm going to see my first Sherlockian play!  Being so deep into this hobby as I am, it's surprising that it's taken me over a decade to see the great detective on stage, but that dry spell ends in a few days. 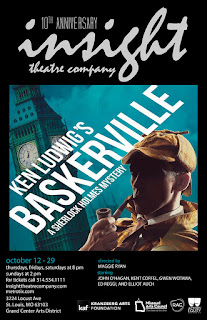 Starting this week, the Insight Theatre Company in St. Louis is performing "Baskerville: A Sherlock Holmes Mystery" all throughout October.  I've heard snippets of reviews of Ken Ludwig's play here and there and expect a humorous retelling of The Hound of the Baskerville, but I purposely haven't looked for much more information on the play.  I want to be surprised by what this troupe puts out there.

Some of their previous performances have included "On Golden Pond," "The Wizard of Oz," "Death of a Salesman," and a bunch of titles that would probably be familiar to anyone with even the slightest theater knowledge, of which I'm lacking.  Although I would've LOVED to have seen their performance of "Charlotte's Web."  Love that book.

Sherlock Holmes has a rich tradition in the theater.  From Mary Morstan, Cadogen West and Josiah Amberly in Doyle's stories to William Gillette and Charlie Chaplin to Charlton Heston and Jeremy Brett to the modern day incarnations all across the globe, Holmes and the theater seem to go hand in hand.  If anyone follows Howard Ostrom on Twitter, you see just how many local productions of the Holmes stories are constantly being put on. 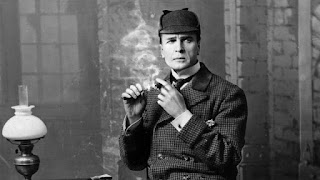 Why does Holmes endure in the theater tradition?  I'm about the last person to try and answer that.  My exposure to theater is extremely limited, but maybe I'll be an expert after this weekend.  Doubtful, but it gives me something to mull over this week anyway.... 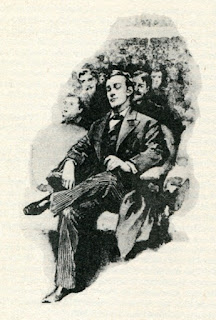