An Open Letter to Steven Moffatt

On Thursday, Radio Times gave Steven Moffatt another opportunity to dangle the possibility of more Sherlock to the show's fans.  And the internet took another vague statement from him as a definite confirmation that BBC's update of the Sherlock Holmes stories will be back in 2020 or 2021.

I would like to formally address Mr. Moffatt and his recurring hints about returning Sherlock to TV: 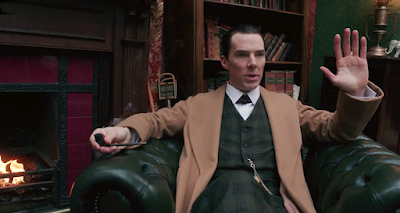 Mr. Moffatt, you have taken Sir Arthur Conan Doyle's original stories and brought them to a whole new generation that has created such an outpouring of emotion for The Great Detective that will not be rivaled again in my lifetime.  Sherlock Holmes has been around for over a century, and your take on him created a groundswell that was revolutionary. 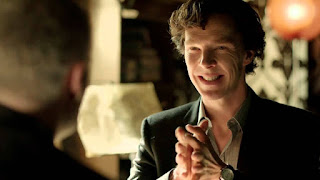 Season one was some of the finest television I've ever seen in my life!  After season one, the cultural revolution was on, and you were of course going to adapt three of the most popular of all the Holmes stories: Irene Adler, Professor Moriarty, and The Hound.  You went down the tried and true pastiche road of over-inflating Moriarty and Adler's roles in the Sherlock Holmes world, but your episodes were great, so I forgive you for that.  And the cliffhanger of season two?  Hoo boy!  (It's not too soon to talk about spoilers yet, is it?) 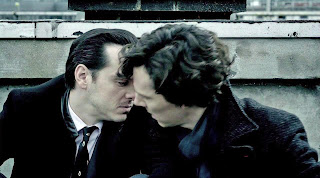 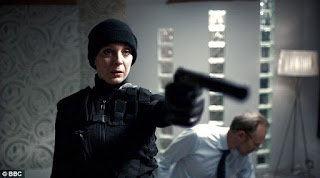 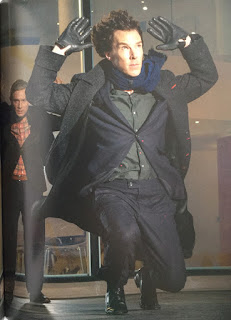 Okay....  I wasn't totally sold on season three.  I still bought the blu-ray when it came out, but the show was very different from the brilliance I loved in season one.  And then there was quite a bit of a hiatus.  But to appease the fan base, we were given a Victorian Christmas special. 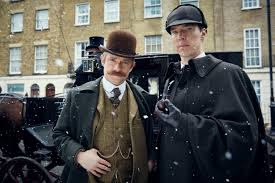 Oh My God.  Look at how good this looks!  All doubts I had after season three were gone.  Mr. Moffatt, you told us that this wasn't going to have to do anything with the arc of the contemporary Sherlock series, that this was just something fun that you wanted to do with the characters.  I'm sold!  I even got my wife to sit down and watch the Victorian special with me, and she has NO interest in Sherlock Holmes.

When Mycroft said his line about "a virus in the computer," I cringed.  Oh no.  We'd been sold a bill of goods.  What had promised to be a fun throwback to a different time ended up to be a crazy convoluted fever dream.  At one point, my wife looked at me and asked, "Why do you like this show?"  I couldn't come up with an answer to that anymore.

But, like the Sherlockian fan that I am, I came back for season four.  Admittedly, I didn't have high hopes, but Culverton Smith is a great character, and I looked forward to seeing what you could do with him. 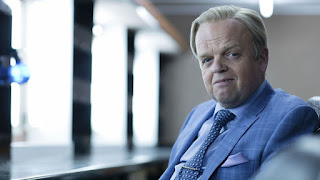 And I got what I deserved.  Four and a half hours of crap spread over three weeks. 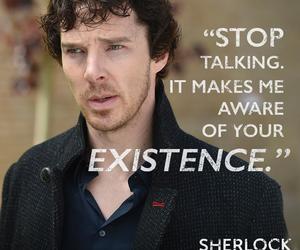 The show had taken a hard left turn in to Crazy Town, and Steven Moffatt was the giddy mayor out to prove that he could do whatever the hell he wanted with these characters, because he's Steven Moffatt, dammit.

It's been over a year, and the last episode still makes me angry.  What kind of shitshow was that supposed to be?  Did you forget that you had 60 stories of Conan Doyle's to work with and decided that you really liked the SAW movies instead?

BBC's Sherlock started out as one of the greatest things on TV and turned into complete trash.  But you can't leave well enough alone, can you?  "Maybe we'll come back..." "There's more stories to tell..." "Sherlock and John grow old together..."

I will be forever grateful for the great television that your first two seasons brought us, and even more thankful for the great fans that it produced and introduced to Conan Doyle's stories and the Sherlockian world at large.

We've got it from here, Steve.  Those of us who revel in the Canon more than you obviously do are happy to take the BBC fans and discuss the original stories with them.  And there's a great fan fiction community out there for fans that want to keep telling stories about Sherlock, John, Molly, Mystrade, otters, and whatever else they can think up.

Mr. Moffat, You've done your part.  It's time to move on.