So Sinister Was the Impression

I've been reading Diane Gilbert Madsen's Cracking the Code of the Canon, an interesting take on data from the 56 short stories.  The book doesn't consist of essays or research like the typical scholarly book would.  Instead, it is a statistical categorization of information from the Canon.  Wow, I made that sound really dry.  She backs up her data with descriptions and opinions of her findings.  I promise, this isn't some Stats 101 textbook. 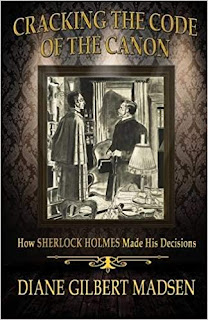 One of these categorizations Madsen makes is grouping the criminals in the Canon.  She groups them into "Super Villains," "Exceptional Female Villainesses" and "Demi Villains."  For whatever reason, I had just gone down an internet rabbit hole and spent the previous night reading about a group of Spider-Man super villains named The Sinister Six.  And, because I'm apt to let my mind run rampant with connecting Sherlock Holmes to unrelated things, I spent some time thinking, who would Sherlock Holmes' Sinister Six be?

Spider-Man's Sinister Six was almost spearheaded by the evil genius, Doctor Octopus, and was typically bent on revenge against the hero.  So, using that same framework, I decided that Sherlock's Sinister Six would all have to join together after their respective bouts with Holmes, so anyone that dies in their story would automatically be out. 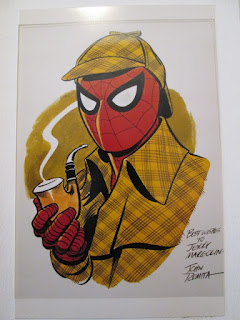 Madsen lists Professor Moriarty, Colonel Moran, John Clay and Baron Gruner as her super villains.  I think Moriarty and Moran are shoo ins, due to their being the only villains to appear in more than one story, and their history of working together.  Moriarty is obviously the criminal genius in this situation, recruiting others to form this made up team of super villains.

British behavior will be expected in this group, so I think we have to rule Gruner out.  I don't see him as one who would work well with others, anyway.

Victorian society was very concerned with class, so if this is a team that will be meeting and working behind their public personae, we are probably going to want to keep membership to the genteel class, that way no suspicions would arise when Moran plays cards with one of the members in his club, or a member visits Moriarty at his university office.  John Clay attended Eton and Oxford, is the fourth smartest man in London, is the third most daring, and has royal blood.  If he escaped prison after being pulled out of that tunnel, I think we have our third member. 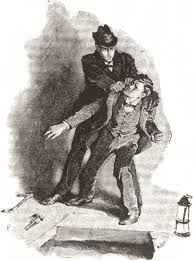 But you know who wouldn't have to escape from prison?  Our next three members, Jephro Rucastle, Sir George Burnwell and James Wilder.  Three villains who all have a reason to want revenge on Holmes yet never went to prison for their crimes.

After Rucastle's first run-in with The Great Detective, he was left broken, mangled, and without his daughter's income.  Unable to leave the house, he has spent his time learning - no, obsessing - about his revenge on Sherlock Holmes.  Imagine his one interaction with Holmes from Rucastle's point of view: he returned home, found his daughter had escaped, a stranger in her room, and when Rucastle tried to protect his home, his own mastiff turned on him, only to be shot and killed by the stranger's accomplice.  Jephro Rucastle is a man bent on revenge.

Sir George Burnwell had a fortune literally ripped from his hands in The Beryl Coronet.  Try as he may, he couldn't overpower Sherlock Holmes, and was forced to flee to freedom with his amor, Mary.  Whether they stayed together is anyone's guess.  But we can be sure that Burnwell wants his revenge on Holmes.

Wilder has every reason to hate Holmes.  He's already prone to hate; just look at how he feels about his stepbrother.  Holmes shows up, ruins his kidnapping scheme, gets his partner put in jail and Wilder gets shipped off to Australia.  Wilder could have found his fortune there, and is spurred on by his hatred for Holmes, that when he comes back to England, he is flush with cash, a (dubious) inroad to the peerage, and would be a perfect recruit for Moran to bring in under his wing.

These six villains have plenty of reasons to wish the end of Sherlock Holmes.  The Great Detective should probably be thankful that they never crossed paths... 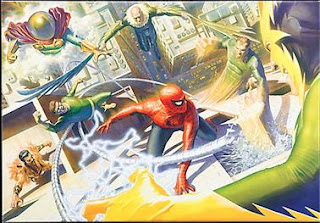 P.S. As I went through the list of villains, from Madsen's book, some other names jumped out at me as people who would want revenge on Holmes, but had to be discounted for other reasons.  So, here is my list of honorable mentions. 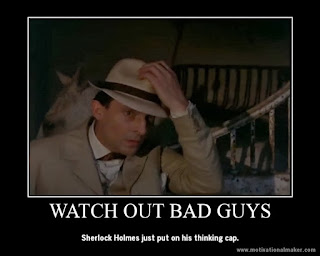