Singularly Adapted to Our Needs [MISS]

I spent a lot of time this week meandering through different topics for tonight's post.

After listening to this week's episode of Trifles about Germans and Sherlock Holmes, I thought about doing a post on how Hans Gruber could be tied to the Canon.

Then I saw Dan Andriacco's post about the lineup for Holmes, Doyle & Friends, and figured I could do a love-fest for the names on that list.

This weekend I read a crazy book: "Adventures of Huckleberry Finn as Retold by Sherlock Holmes."  That was high on my list to talk about.

But a tweet by Howard Ostrom popped up this morning, and I found myself debating the merit of younger versions of the Canon. 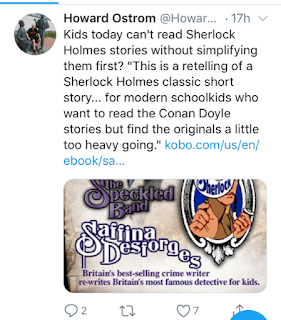 Sherlock Holmes + Kids Reading.  Yeah, I have some opinions on that.

Some folks thought that kids should read the original Canon as is and revising it is pandering to the lowest common denominator.  An argument was also made that by reading the stories in their original form, kids would learn new vocabulary terms.  (Another person said that they thought the Canon shouldn't be taught in school because it isn't literature.  We agreed to disagree on that point.)

This year, The Beacon Society undertook an initiative to list many appropriate texts that educators can use to introduce Sherlock Holmes to students at any age.  Now, I don't think the people that I was tweeting back and forth with all day today were saying that kindergartners should sit down with the Doubleday and a dictionary and fend for themselves.  But is it wrong to expose kids to Holmes and Watson with some very light versions of the Canon? 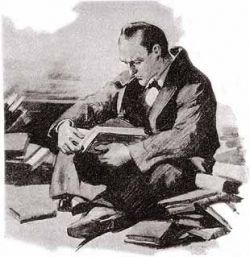 The Canon is written at approximately a high school reading level.  As a fifth grade teacher, I want my kids to know about Holmes.  There's no way in hell I would expect them to wade through Victorian literature at their age.  Even my highest readers would get bogged down with some of the outdated terms.  Do they really need to know the difference between a hansom, growler, four-wheeler and a dog-cart?  Just call it a cab or a carriage and get on with the story.

An valid argument was made that these stories are full of great vocabulary for kids to learn.  I agree with that, but also don't want them to miss the forest for the trees.  If a kid is spending time looking up word after word, the genius of these stories is going to be lost on them; instead they're reading a choppy tale that is teaching them what "moor" means.

So many people are quick to make decisions about how "kids these days" need to be taught without taking into account all of the micro-decisions that educators make when developing lessons.  (I can do a WHOLE LOT of expounding on the "kids these days" sentiment, but will spare you.) 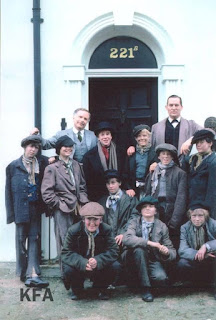 A friend of mine that teaches in Missouri is also a fifth grade teacher and loves doing mysteries with his class.  When his students read Holmes, they use an adapted version to learn about the framework of the mystery genre.

Shannon Carlisle in Tennessee also uses younger versions of the Holmes stories in her fourth grade classroom.  But her focus is to teach deductive reasoning and decision making skills.

Both of these educators are using texts that are at their students' levels and their kids are getting a great education from it.  Nothing is being dumbed down for these kids.  The focus of these lessons isn't to expand students' vocabulary or teach them to decipher unfamiliar phrases, but to teach genre conventions or critical thinking.

Would it be great if we could also teach kids to look up unfamiliar words along the way? Absolutely.  But you must prioritize what's important.  And quite frankly, teaching outdated words and phrases is nice sometimes, but it's never going to be high on my priority list.  My number one priority is getting kids to fall in love with books. 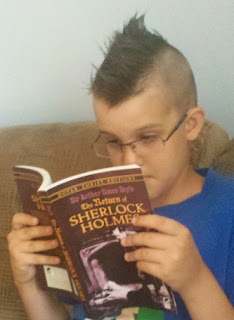 We Sherlockians are a literary bunch, and I'm going to assume that we are all pretty strong readers.  That statistically means that most of us were pretty strong readers as kids.  We are blessed.  Whether it was a teacher, family member, librarian, or other angel here on Earth, someone introduced us to The Great Detective.  We picked up our first story, and there was no looking back!  We are the chosen ones.

Because if a kid isn't enjoying what they're reading, how can we help them grow into adults that love to read?
Posted by Rob Nunn at 8:36 PM