I always wondered why Brad Keefauver posts quick updates when he's at cons and events.  Now I know it's because one all-encompassing post would be way too much at once!

Friday kicked off with an informal get together with some Sherlockian teachers, known as the PTA (Priory Teachers Association) for breakfast in the lobby.  I keep saying this, but meeting Sherlockians in person after only knowing them through emails has never been a let down!  Derrick Belanger and Mark Jones definitely kept that streak alive.  Derrick is the powerhouse behind Belanger Books, an independent press that puts out specific Sherlockian topics, including a pastiche collection aimed at middle grade readers.  AND he's the recipient of this year's Beacon Society Beacon Award.  And has anyone heard of this new podcast Doings of Doyle?  That's Mark Jones.  He is a solid Doyleian, so much so that he had to rush off from our breakfast for a meeting about a new Arthur Conan Doyle society.  Shannon Carlisle joined us at the end, and the preeminent BSI teacher (who gave a toast to Mrs. Hudson last night, comparing her to a teacher of gifted children) always brings a lot of heart to a conversation. 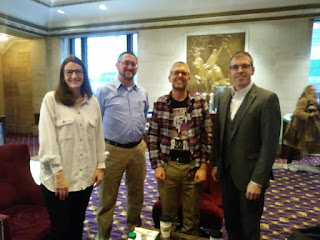 After that, I had some down time.  And being a few blocks away from the New York Public Library, I couldn't NOT visit.  So it was off to take the required pictures of the library lions, Patience and Fortitude, marvel at the reading room, appreciate that J.D. Salinger was more than the guy who wrote "Catcher in the Rye," and visit the original Winnie the Pooh toys before heading off to my first official Sherlockian activity for the day.  Oh, and there was a gift shop at the library.  So.... 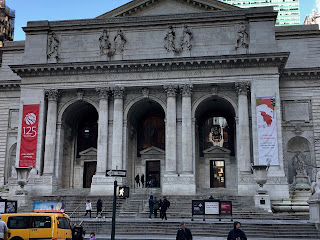 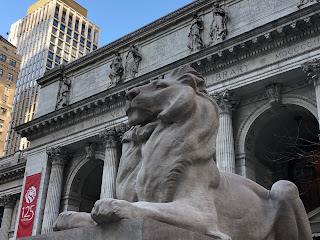 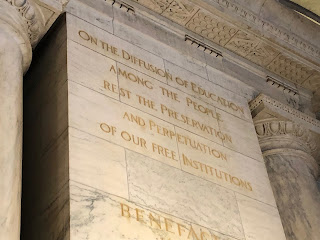 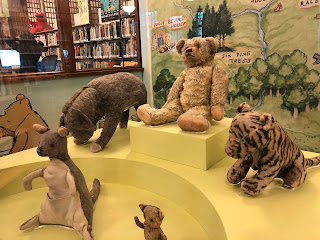 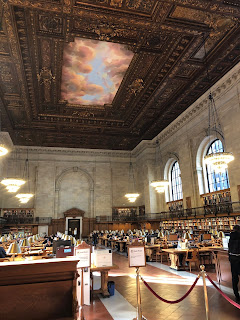 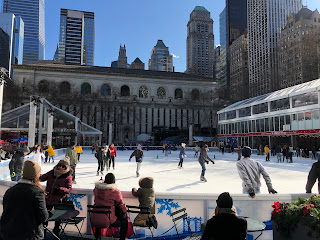 The William Gillette Memorial Luncheon was next up for the day and it was a great turnout.  Unfortunately, I was one of the last people to register, so I found myself in the back of the room, so it was hard to hear the announcements some time.  But outweighing that, I had some delightful folks at my lunch table, including a fellow Illinoisian also in New York for her first time.  I also completed my I Hear of Sherlock bingo card by finally getting to meet Scott Monty in person.  Like me, he was a late registrant so the back of the room where were the cool kids hung out.

I headed back to the hotel, got to my room, and realized I'd left my key in the room.  On my way down to the lobby, I realized I'd left my library souvenirs and some Sherlockian articles at the restaurant.  On the way to the restaurant, I realized I still had to get a souvenir for my daughter.  So, I hot-footed it back to the restaurant, made a pointless trip to the Radio City Music Hall gift shop, hit up a NYC tchotchke shop, and finally made it back to my room with a new key.  After a much needed nap, it was time.  The BSI Dinner.

I love Sherlockians.  I find every single person in this hobby interesting.  And being in a room full of some of the most dedicated and intelligent Sherlockians was great.  David Harnois was a fellow first-timer, and we kept checking in with each other to appreciate how great the evening was.  I somehow lucked out to have a great set of table mates, Sonia Fetherston (who was too shy to let me take a picture with her), Evie Herzog, Jeffory Hart, Dan Polvere, Bill Mason, Marilynne McKay, and Barbara Cooper. 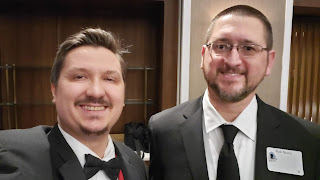 After the program ended and investitures were issued (Carlina De La Cova!), the majority of folks adjourned to the bar downstairs.  Being a private club, only people staying at the Yale Club could order drinks, so poor Charles and Kris Prepolec had to field a bunch of drink orders when we first arrived.  Once I had a beer in hand, I took a minute to step away and help my wife deal with a power outage and beeping sump pump back home (being a grown up can be a headache sometimes), it was into the fray.  By this point, my anxiety was kicking in a bit, so when I was able to settle into a conversation with Ashley Polasek and Curtis Armstrong, it was nice to take a deep breath.  Curtis soon got pulled away, but was replaced by Ken Ludwig, and the three of us had probably my best conversation for the whole weekend so far.  Ashley shared her research on affirmative fandom vs. transformative fandom with us, and I now view the different camps of Sherlockians in a whole new light.  Ken and I may have found a way to spread The Beacon Society to a major library system, and plenty of other nice points.

At 1 AM, the Yale Club kicked us out and it was back to my room and a few short hours of sleep before the Beacon Society meeting and the craziness of the next day.
Posted by Rob Nunn at 2:33 PM