Then we came to the end.  Sunday's alarm told me it was time to pack up before heading to my last event, the Adventuresses of Sherlock Holmes brunch.  Checkout time was 11 and the brunch didn't start for a while after that, so a lot of us milled around for a while.  I got to spend a good amount of time with Michele Lopez from Italy, and he and I compared the difference between his experiences in Europe and mine in middle America.  Some people had flights that morning, so some of our goodbyes were said before the mass of us headed to brunch.

I was warned that the food wasn't very good at this brunch, but this was the last event of the weekend, so I was still looking forward to spending just a little bit more time with everyone.  I was pleasantly surprised by the food once I made my way through the buffet.  Bacon, sausage, potatoes, and tomatoes were all great.  There were also scrambled eggs and mushrooms, but I can't speak to those.  So, if anyone tells you the ASH brunch has sub-par food.  Let me reassure that it's very good. 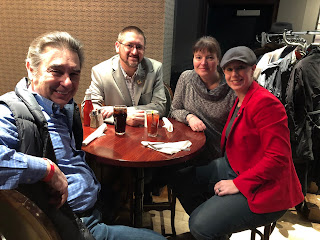 But you know what's better than the food?  The camaraderie!  After so many structured meals and scores of speakers, this was a pleasant way to end the weekend.  You checked in, found a table, got your food, and mingled until it was time for you to head to the airport or train station.  I snagged a table with Monica Schmidt and Al Shaw and talked about Holmes in the Heartland, Chicago scions, whether or not Monica would make a good G.I. Joe villain, what Al thinks about paper straws, and plenty of other things that you do with your friends.

Also in attendance was Susan Rice and Mickey Fromkin.  Susan and I have been emailing lately about her involvement with young Sherlockians back in the 70s.  As someone who spends a lot of time with kids, I was looking for any tips and tricks she remembered.  Susan told me to see her and Mickey at the Gillette luncheon and she would have some papers for me, but she would be too busy to talk then as they oversee the festivities.  She would have more time to talk at the BSI lunch the following day.  Good to her word, Susan had a manila envelope full of histories sitting on her lap at the Gillette luncheon, just waiting for me to show up.  I tried to spend some time with her on Saturday, but trying to talk to Susan Rice is like trying to get an audience with the Pope.  I swear,  there was a line of people wanting to have a few minutes with her!  Although I didn't get Susan time on Saturday, I did get to talk with Mickey, and she is such a wonderful person!  I want a reality show that just follows Susan and Mickey through their daily lives.  Mickey could easily do a whole show on just her Sherlockian shirts!

Anyway, I finally got time with Susan at the brunch on Sunday (after waiting in line).  She told me all about the Trifling Monographs meetings that she oversaw, some of the amazing quizzes held there, what students did as part of their meetings, and many other things.  There weren't any chairs around her, so I ended up sitting on the floor just to hear these stories.  Unfortunately, my knees aren't what they used to be, and I had to finally get up.  Sure enough, someone else was right there to take my place!

I then butted into Charles and Kris Prepolec, Dena Howlett, Bob Stek, and David Harnois's table for a while.  I learned about the Canadian marijuana laws, travels in Europe, theater carpentry, what a bad glass of Guinness tastes like, and plenty of other bric-a-brac.  Sunday's brunch was very much like the last day of summer camp.  Lots of pictures were being taken and everyone was relishing in those last few moments.  People drifted off in twos and threes, saying their goodbyes.  And when it was your turn, you made your rounds as well. 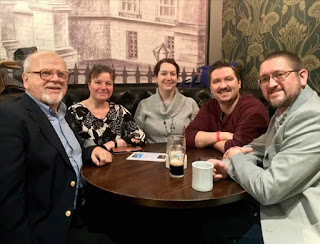 Cindy Brown and I shared an Uber to the airport, split up at our gates, and I was left to sit and appreciate how blessed I was to get to spend four days with some really great people.  Not only was I able to take time off of work for this trip, but donations to the John H. Watson fund allowed me to go, as I was a recipient of so many people's financial generosity.  But the generosity that will stick with me forever is the welcoming that I experienced from everyone I came across.

From my first night, I was swept up in the good-nature of everyone there.  Friendships were strengthened, online acquaintances turned in to real life friends, new people were met, and a convivial atmosphere was all around us.  The elephant in the room is that the Baker Street Irregulars is an invitation only organization and the BSI dinner is also by invitation.  Those are facts, and I can't argue for or against them.  I can tell you that every other event during the weekend is open to everyone and another dinner is held during the BSI dinner to make sure that everyone has something to do.  The Lost in New York Dinner on Saturday was created specifically for people to have an event where they could get together.  I spent time with Republicans, Democrats, people with purple hair, people with no hair, gay, straight, young, old, longtime Sherlockians, and some who haven't even read all 60 stories.  Everyone got along with one another.

I may never be invited to the BSI dinner again.  Will I be bummed?  Sure.  I loved being in that atmosphere with people I enjoy and respect.  But you know what?  I'm going back to New York next January whether I have an invitation or not.  Because this may be called the BSI Weekend, but only three events are actually put on by the BSI, and two of them are open to the public.  There is so much to do and so many people to spend time with.  For a Sherlockian like me who enjoys, no LOVES, spending time with other Sherlockians, this weekend was a dream come true.
Posted by Rob Nunn at 8:33 PM